Trending
You are at:Home»THEATRE»THEATRE: THE GLASS MENAGERIE
By Karen Salkin on September 15, 2010 · THEATRE

How many times in my life have I seen this play? The first time was when I was a very little girl, and I just didn’t get it. (But my parents took us to every cultural experience possible, so this was simply one of the ones that didn’t work for me.)

Of course, I’ve seen scenes from it dozens of time, in every acting class I ever took! Why? I still don’t know. (Even though I’m guilty of having performed a few myself.) And again on Broadway about five years ago, in up-close seats. The attraction then was two-fold: a) I was thrilled that I still had a fun enough guy friend in New York to ask me to a play, and b) Josh Lucas played the Gentleman Caller. Who wouldn’t spend a few hours of otherwise boredom to stare at him up-close and personal? (The rest of the cast were more famous–Jessica Lange and Christian Slater–but I had already forgotten they were in it!) 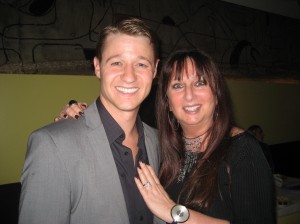 Karen laughing it up with birthday boy Ben McKenzie. Photo by Rita Tateel.

And that’s how I felt about Ben McKenzie in the same role at the Mark Taper Forum’s current production. Ben will always be Ryan from The OC to me. And both of them have grown-up very nicely! (Ben and Ryan.) I was very happy to see that he was outstanding in this new role.

More on him later. First, I must laud this entire production, from the stage-less set to Judith Ivey’s brilliant rendition of Mother Wingfield. (Although I was tad under-impressed with the actors who played her two children. They were good in parts, and the opening night audience seemed to love them, but they both left me a little confused. More on them later, as well.)

In all the times I’ve suffered though The Glass Menagerie, I’ve never realized that it could be funny! But this Long Wharf Theatre production at the Taper, by way of New York, was just hilarious. Mainly because of Judith Ivey. What a tour-de-force for her!

It’s just always been too depressing for me, and I’m sure this one is, as well, when one reflects on it post-show. But the journey to the conclusion was fabulous. 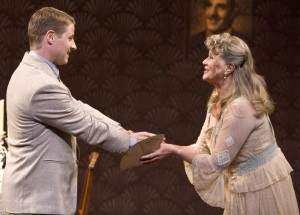 What I loved about the production: Judith Ivey’s scintillating performance, seeing the adorable Ben McKenzie being a wonderful grown-up actor, the set that was just on the floor of the venue with no stage, and especially the un-painful way it was directed. I’m just about positive that no words were changed, so to get so much humor out of such a depressing subject was just a revelation.

What I wasn’t in love with: the performance of the other two actors. They were fine, but both left me wanting something different. Keira Keeley as the “crippled” Laura, seemed to lose her limp from time to time, and just didn’t totally cut it for me. And, these next two complaints aren’t her fault, but I thought it was strange that her frocks were kind-of see-through (the original play takes place in about 1938, though the program at the Taper lists it as simply “the past”) and I didn’t understand why she removed her leg brace about three minutes after her entrance.

Patch Darragh as her brother Tom, who’s also the Narrator, had me a tad confused. He seemed to be playing the part a little gay, and I had heard that this was a “new take” on the play, so I kept thinking that this was where they were going, with Tom’s mysterious disappearances. Perhaps it was a struggle with the Southern accent for him. He was good, just not great, for me.

What I hated: THE CIGARETTE SMOKE in both acts!!! I still don’t know why plays do that in these times when we all know how dangerous it is! My lungs, and people around me, swear that this was real tobacco, but even herbal ones are annoying at best. And, of course I was sitting up-close (the better to see Ben,) so I wound-up having an asthma attack. But at least a tenth of the packed house was coughing sporadically the rest of the night. If plays feel that smoking is essential to the plot, which in this case it absolutely was not, why can’t they just use those ones that light up, which can be procured from joke shops?

Smoke aside, this was one of the most worthwhile productions I’ve ever seen in L.A. And I’m hoping that having a young cute guy from TV will bring in the young audiences for a superior theatrical experience. Then maybe they won’t dread Tennessee Williams as much as I do. 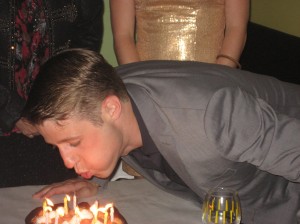 Ben blowing out his birthday candles at the after-party. Photo by Karen Salkin.

The after-party was fun, too. Held at Cuidad downtown, the passed hors d’oeuvres were delicious, and the waiters could not have been more accommodating. And, as it was Ben McKenzie’s birthday, there was an even more jovial mood than usual. And I got to see his mom again and not only congratulate her on her son’s performance, but remind her how she was so kind to have him pass the family’s chocolate bars down to me on another occasion at the Taper when we there to see a show his uncle had written. She said, “Oh yes, I remember that!” What a nice family, unlike the poor Wingfields depicted in the play.