Trending
You are at:Home»THEATRE»THEATRE: THE BAND’S VISIT
By Karen Salkin on December 3, 2021 · THEATRE

First of all, I have to say that I adored being back at the beautiful Dolby Theatre in Hollywood! It’s so classy and elegant. And seeing all the giant images of Academy Award winners through the years, which adorn the walls, makes getting there early a pleasurable experience. (As do the concession stand’s best chocolate chip cookies I’ve ever eaten!) And the staff this time was the most congenial group ever!

So, at that point, I didn’t really care if I would love The Band’s Visit or not. I was just happy to be out and about again, and into that lovely venue.

Photo by Evan Zimmerman, as is the one at the top of this page.

One of the best friends of one of my best friends, (who’s a Broadway-loving gal,) won a Tony for this musical on Broadway, so I was happy to finally get to see what the fuss is all about.

Not only did that actress win a Tony, (but she’s not in this touring company, so no need to discuss her in this review,) but The Band’s Visit is one of only four musicals in history to win Broadway’s unofficial “Big Six” Tony Awards, which are Best Musical, Best Direction of a Musical, Best Book, Best Score, Best Actress in a Musical, and Best Actor in a Musical.  (But don’t rely on those awards too much; as an example, the other nominees for Best Musical that year were Mean Girls, SpongeBob, and Frozen! As Mr. X quipped when I told him that my mother said he’s her favorite relative–there wasn’t much competition!)

The Band’s Visit is a low-key, slice-of-life, different kind of musical. If you’re hoping to see something akin to The Lion King, or even My Fair Lady or West Side Story, or especially Hamilton, this is not the show for you. But after over a year and a half in our homes, this laid-back little tale might be the way to ease back into entertainment. 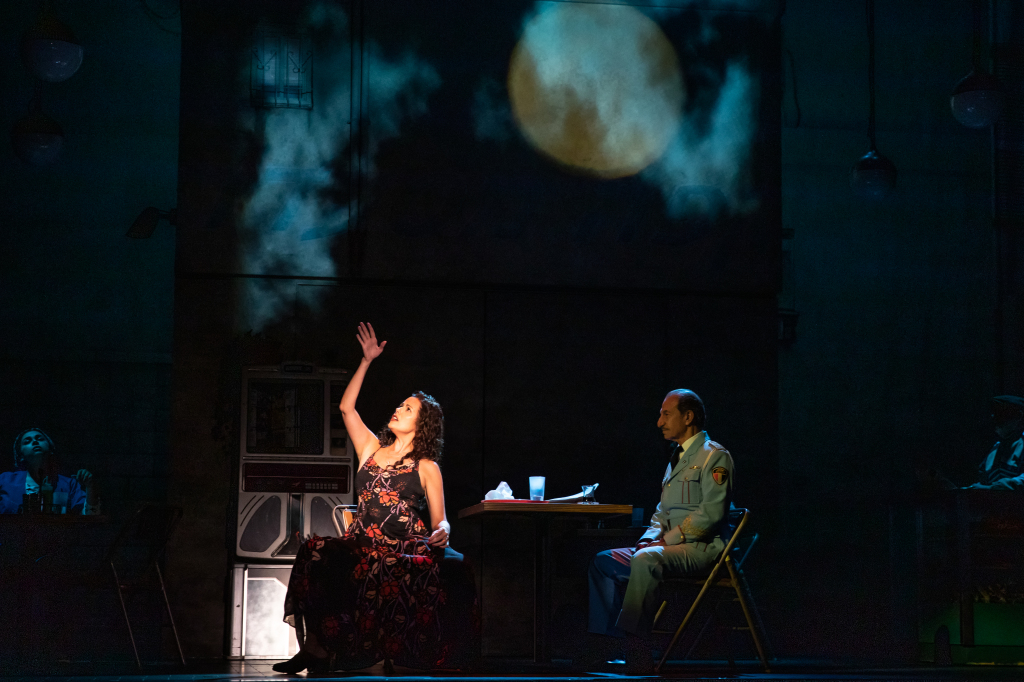 Even though the scenario takes place 1996, the story is reminiscent of one heartwarming true-life one from today. In a case of people meeting due to a miscommunication, it reminded me of the current chronicle of a young man receiving a text invitation to a stranger’s Thanksgiving dinner by mistake. And…he accepted! That was six years ago, and the relationship is still on-going. [Breaking news: Right after I had finished writing this review, Netflix announced they’re making a movie of this story, and calling it The Thanksgiving Text!!! I guess I’m prescient.]

In this show, an Egyptian band meets several Israeli residents also by accident, and although as far as we know, (because the narrative takes place over only about twenty-four hours,) they don’t keep up the friendships, we can let ourselves imagine that they did form life-long bonds. (Cell phones and computers were beginning to become popular in those times, so I like to think that the characters did keep in touch.)

The music itself was the highlight of The Band’s Visit for me. I didn’t really care about most of the actual songs; it was the auxiliary, mostly between-the-scenes, Middle-Eastern-flavored music that I could have listened to all night, rendered by the very talented on-stage “band” of the title. A quintet of the men really are musicians, (as opposed to being actors.) The score is mainly of that Middle Eastern variety I just mentioned, which is beautiful, but the songs are comprised of all different styles of music. I especially loved the cool, old-jazzy-sounding Haled’s Song About Love. 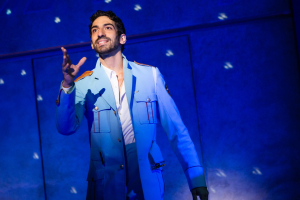 The music more than makes-up for any weaknesses in the production. There actually aren’t many of those, either. One of the few semi-negatives for me is that I couldn’t get fully into the story. I feel bad saying this, but just about all of the heavy-handed (but most likely accurate) accents made a bunch of the dialogue somewhat difficult to understand, so I didn’t get what was happening from time to time. And I believe that some of the words were in the characters’ native languages, so that didn’t help.

Another less-than-ideal aspect of The Band’s Visit for me is that none of the characters made me care much about them. That might be due to the fact that I sat at the back of the orchestra, so I couldn’t make-out their facial expressions. This is such an intimate show, as opposed to blockbuster musicals, that I feel we all really need to see what’s going on in the characters’ beings to fully enjoy it.

But a major bonus for you fans of Israeli films is that the male lead, Sasson Gabay, who plays the band’s conductor, Tewfiq, originated that role in the 2007 movie from that country, and later did it in this show for a short while on Broadway. That’s special. 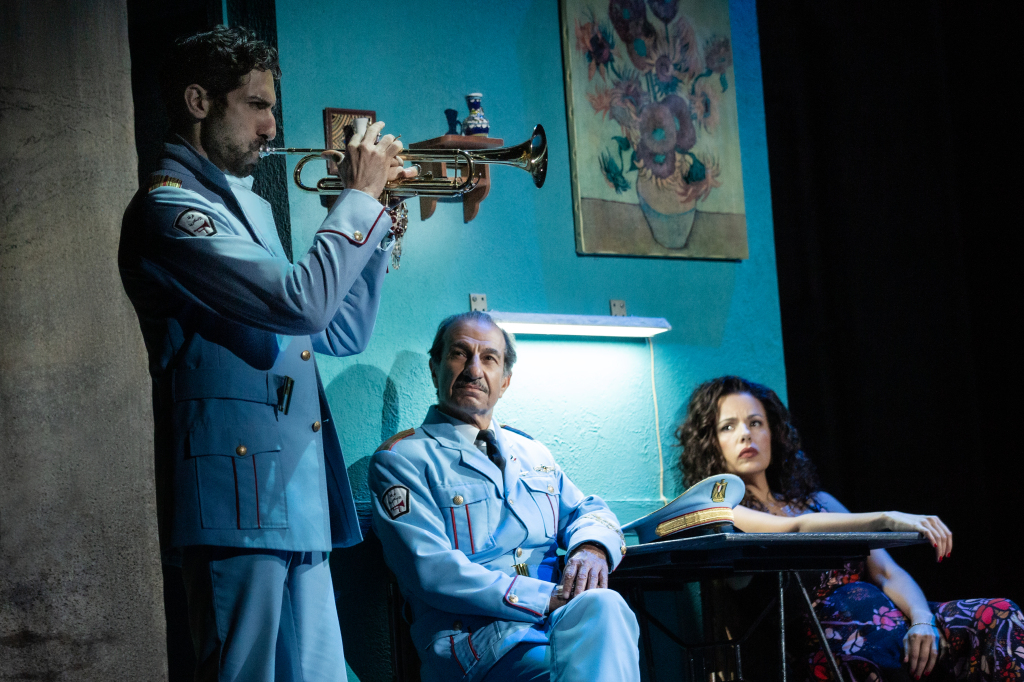 By the way–do not make the same mistake that I did from the “Setting” line in the program. It’s listed like this: “An airport bus station, the town of Bet Hattikva, the city of Petah Tikva.” So I thought that meant that the bus station was in that town and that city, so when I was watching it all unfold, I was wondering why the action moved away from the bus station pretty quickly. I wasn’t sure what was going on for about the first fifteen minutes or so. (Perhaps I’ve lost some of my “program comprehension” skills during the lockdown.) So what that “Setting” line means is that the action takes place in those three different settings; it’s not just one.

I had heard from my New York friends that The Band’s Visit is one presentation you either love or hate. But that wasn’t the case for me. I felt neither emotion. All I felt was gratitude that Broadway In Hollywood is affording us Southern Californians yet another wonderful opportunity to see a well-received Broadway show without the hassle of going across the country! The musical is only an hour and forty minutes long, so even if you don’t wind-up loving it, you’re not spending too much time discovering that.

And here’s some good news for my further-south SoCal readers—the band will be visiting Costa Mesa’s Segerstrom Center for the Arts in March.