Trending
You are at:Home»THEATRE»THEATRE: THE ART OF DINING
By Karen Salkin on December 4, 2019 · THEATRE

THE ART OF DINING

This show is so much more than just a play; The Art of Dining at the Gloria Gifford Conservatory Theater in Hollywood is a whole fun experience. It’s actually two short acts surrounded by food and drink. And all for the one price of admission!

The evening is a combination of two of the main areas of which I’m a critic—theatre and restaurants. So of course I had a blast. 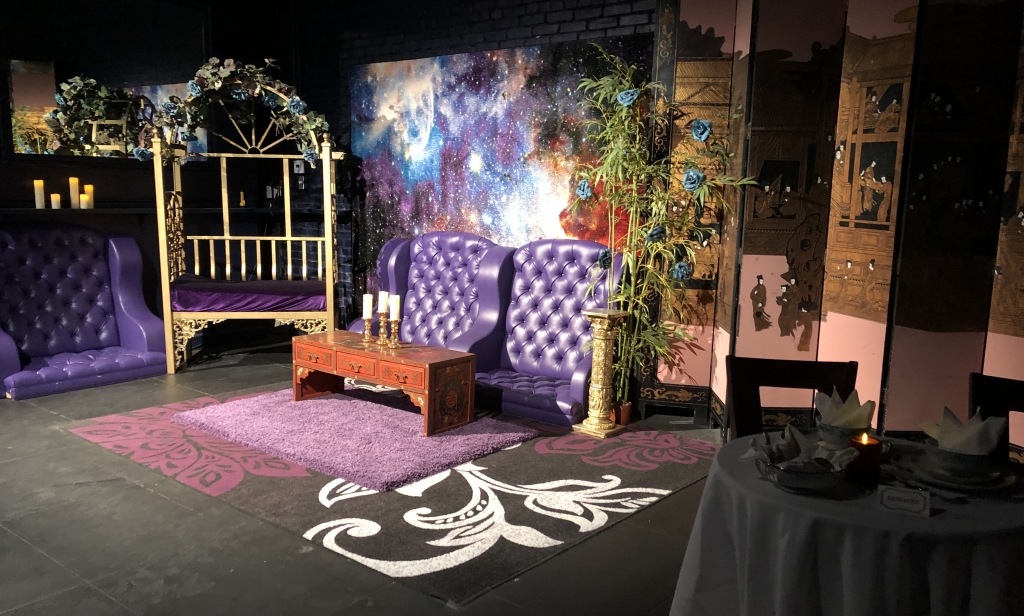 The waiting area of the fictional restaurant in the play. Photo by Karen Salkin, as is the one at the top of this page.

This is how they do it: As you arrive, you’re offered a choice of bottled water or wine to start the evening off right. Then at intermission, which comes after just a very brief Act One, snacks are served. There are veggies and dip, little apples and oranges, and cookies. It’s the perfect mid-show pick-me-up. And a chance to mingle with your fellow audience members. The weird thing for me is that I was looking for food-related earrings to wear that night, and the only ones I could come up with (since I began my search right before I had to leave the house) were one of that was a bunch of fruit and another that was Indian corn! So my prescient-ness must have been working overtime that day!

Then after every show, there’s a generous full buffet, catered by various local restaurants over the run. The night my friend and I attended, we were treated to Peruvian and Mexican dishes, all absolutely delicious. There was something for everyone: fried rice, chicken and noodles, two kinds of tamales, roasted pork, a very delicious healthful salad, and even baby shrimp! And let’s not forget chocolate candies for dessert. 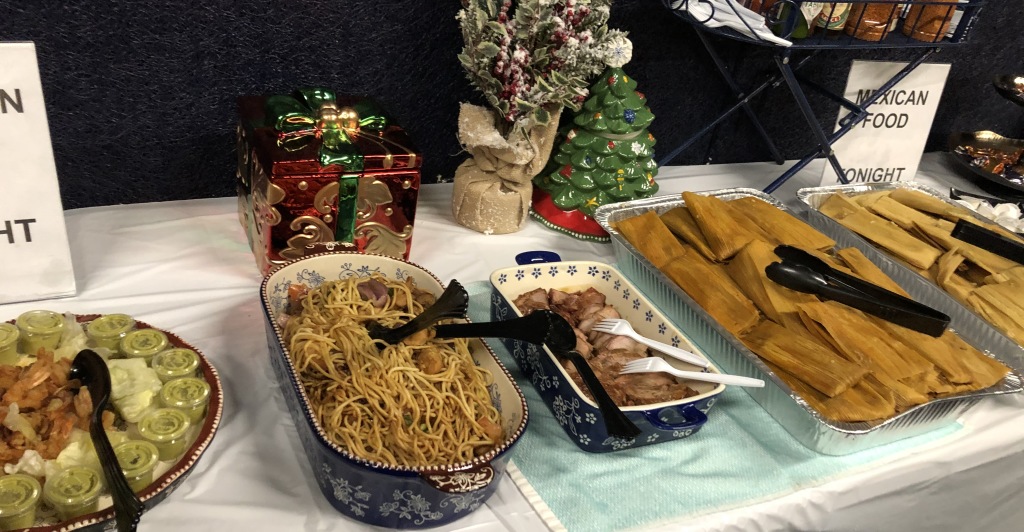 Even better than the food to me, though, is the stunning set by Keturah Hamilton, Lucy Walsh, and Gloria Gifford herself. They made wonderful use of the entire huge horizontal space; every inch of it is covered in beauty. At one end is a golden carousel horse, because the restaurant in the scenario is called the The Golden Carousel. Next up is a lush purple waiting area, (the use of which is very annoying, though,) and then in the center are the three dining tables where most of the action takes place. At the far end is an entire working restaurant kitchen! Trust me—as a restaurant critic for a few decades now, I’ve seen my share of eatery kitchens, and this one is portrayed perfectly! What a brilliant design job, on all of it! The upbeat popular music all evening adds to the fun atmosphere, as well. 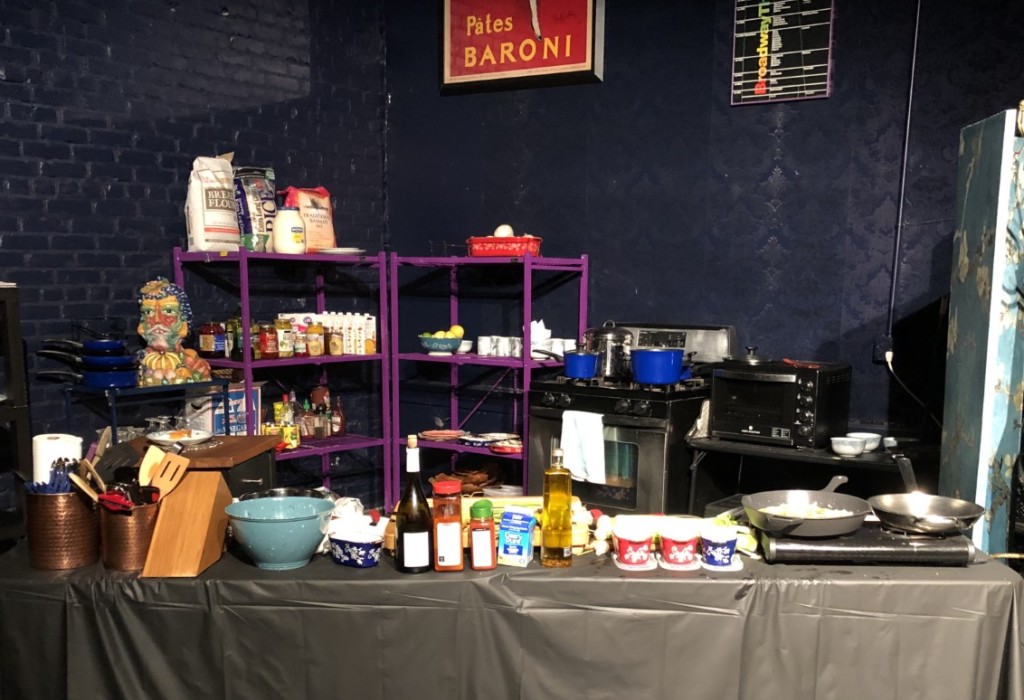 The kitchen area of the set. Photo by Karen Salkin.

As for the presentation itself, I have to admit that The Art of Dining is very far from the finest play I’ve ever seen. It was written in the ‘70s, and my research tells me that it’s a popular show that seems to be produced frequently. It’s perfect for an acting school like this one because there are nine roles, and this company does it with multiple casts, so everyone gets a turn. That’s a positive.

But the writing is so dreadful that I don’t know how it ever got produced to begin with! Surely producers in 1979 had better taste than this. It’s a head-scratcher.

And of the nonet of actors in the cast I saw, Chad Doreck was the stand-out. He’s the only one who got a few laughs out of me. And this is a comedy! Many of the rest of them overdid it to the max. I finally get the negative connotations of deeming someone to be “extra,” because most of them were exactly that. 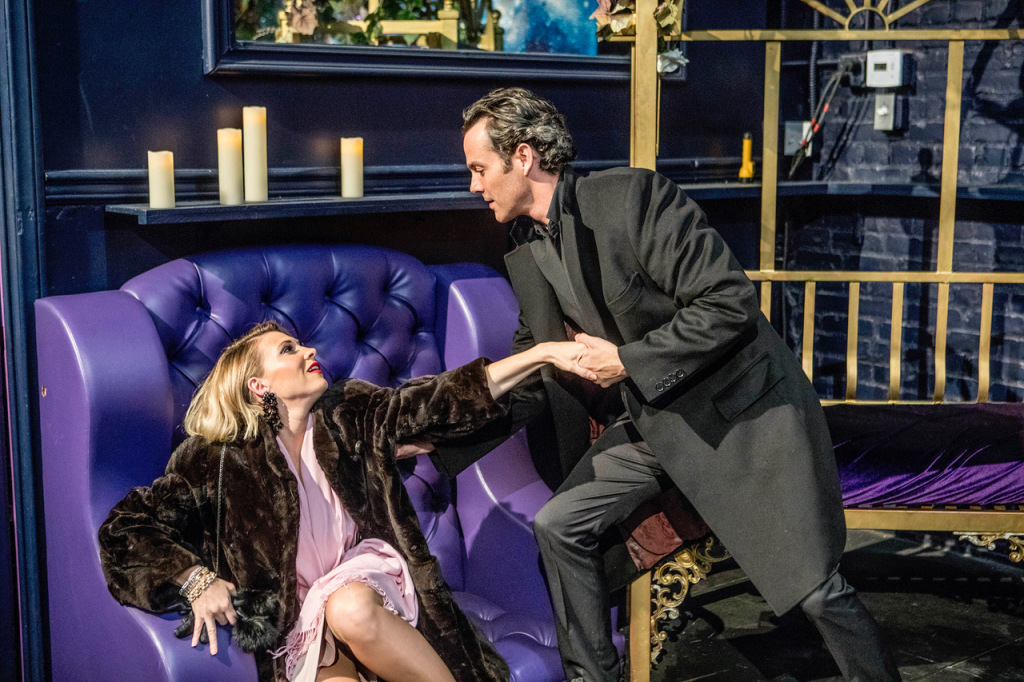 Chad Doreck with an actress I didn’t see. Photo by Mathew Caine.

There’s a trio of women, way overdressed in gold sparkles*, whose every line is delivered in the shrillest high-pitched screeches, during which several of us in the audience had to literally hold our ears. And my friend and I could barely make-out one word they were uttering, with their mouths full, no less. It’s kind-of revolting to watch people talk without swallowing their food first. I understand that one of the hallmarks of this play is that actors actually eat on stage, but there has got to be a less gross way of going about it. *[Note: Gloria explains at the beginning that people dressed to go out to dinner in the ’70s. But I promise you—not like this.] 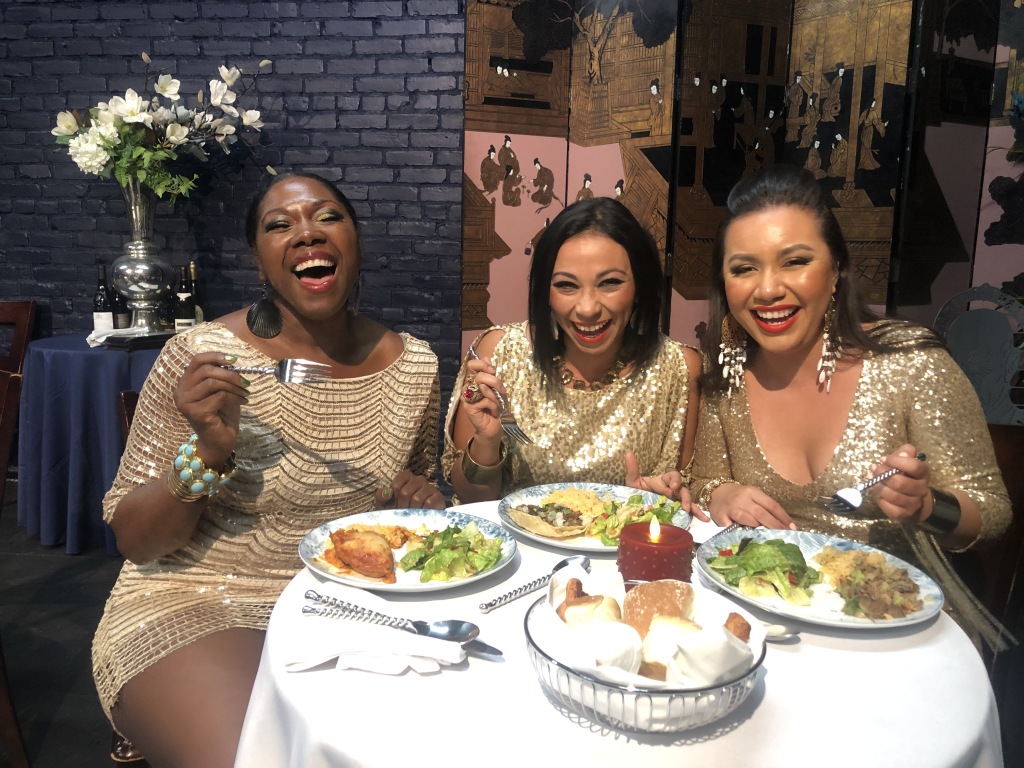 But this is a learning experience for them all, and they’re getting so much more than acting coaching from Gloria. She teaches them how to treat others! That’s the most important lesson of them all. (I know several people I’d like to send to her to learn those bits of wisdom.) Her charges not only greet everyone nicely from the get-go, and offer each guest a beverage, (wrapped in a napkin, the way it should always be presented,) but the males even walk people to their cars after! Dressed handsomely while doing so!

So if you can look upon the actual production as just camp, I know you’ll have a really good evening overall at The Art of Dining. But hurry—this is the last week-end of its run. And be sure to arrive hungry and thirsty!