Trending
You are at:Home»THEATRE»THEATRE: THE ADDAMS FAMILY, THE MUSICAL
By Karen Salkin on October 14, 2015 · THEATRE

THE ADDAMS FAMILY, THE MUSICAL

I had seen this musical once before, when the touring company did it at the Pantages a little over three years ago, so I was already a fan of the show, in general, before I attended the opening night in Fullerton this past week-end. I have to be honest and say that, even though this new 3D Theatricals production is Broadway-caliber, (as are all of their works,) it isn’t close to as good as that previous one. But it’s still enjoyable, and, as my friend Lyndsey put it, “It’s just a fun-filled, family-friendly musical,” which is exactly what one can hope for in an entertainment. 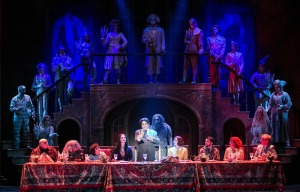 And it’s in our (SoCal) neck of the woods in time for Halloween, so I’m recommending it for everyone. (As a matter of fact, it’s at the Redondo Beach Performing Arts Center on Halloween! What could be more fun for that night?! I wonder if that audience will dress-up in costumes. Check the sked at the bottom of this review for deets.)

Before I tell you about this 3D Theatricals version of The Addams Family, I must admit that I have a feeling my thoughts on the show were colored by three negative factors, all of which had nothing to do with the musical itself: 1) The guy next to me was reeking from cologne, (how are people so unaware of what they smell like?,) so I was having trouble breathing throughout, 2) the man in front of me was about seven feet tall and his head took up most of my view of the stage, and, 3) worse that anything, Plummer Auditorium, (the venue where I saw it) has barely any air-conditioning, and, on one of the hottest nights of the year, it was stifling in there. I literally thought I was going to pass-out. (The AC kicked-in three-quarters of the way though; maybe they should have turned it on much earlier in the day. Just sayin’.)

I’m glad I stuck it out, though, because Lyndsey, like most every member of the audience, really enjoyed the show. I did, too, but to a lesser degree (due to all of the above.) I think to a person, we loved all the campy schtick.

It seems like The Addams Family has been famous forever, first as a comic strip, followed by the television comedy series, then the animated ones, and finally the movie. (I even got called “Morticia” several times during my school years due to my long, straight hair, which I’m still rocking! And proud of it!) And now we have The Musical to entertain us, which it definitely does. What a great choice by 3D Theatricals to produce, especially in October! 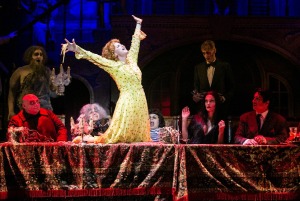 I’m sure that everyone out there is somewhat familiar with this crazy, macabre family, but even if you’re not, you can get into the swing of things right away. The musical has an actual story to it, which is easy to follow. I realized that I really didn’t know much about the characters before; I just seemed to always know of them, but never specifics. But now I totally understand them all, and appreciate what a very loving family the Addams’ actually are.

The Addams Family, despite all the dark humor, is really pretty delightful, with lots of clever little touches. It’s no surprise that one of the book writers, Marshall Brickman, used to work with Woody Allen. (He was also at one time the head writer on The Tonight Show with Johnny Carson. I wish he had been there when I was on that show; whenever anyone wrote for me on those types of shows, my lines in the script always said “ad lib.” I would have adored working with an adept writer!) 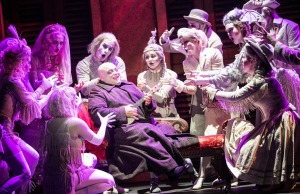 Anthony Gruppuso in the middle. Photo by Isaac James.

This production featured the exact sets that were originally designed by Phelim McDermott for Broadway, and are so inventive. They add so much.

I had two favorite performers, by far. The first is Dustin Ceithamer, who played Lurch. He was perfect, and when he sang a bit, (which was a big surprise,) we were all thrilled. It took us half the show to determine that he was not on stilts, which was confirmed for us when the really tall guy wonderfully break-danced at the curtain call!!! I also loved the man who played Uncle Fester, Anthony Gruppuso, who had a wonderful singing voice. 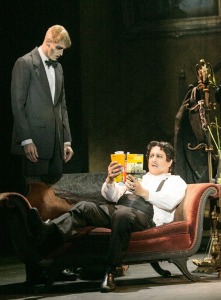 As much as I hate to say this next part, I have to honest with you. I think, in an attempt to add a couple of semi-famous faces to the cast, this company missed the mark with the two leads. Bronson Pinchot ,TV’s “Balki,” from Perfect Strangers (which I never saw, but, I swear, the entire time I thought he was the other guy from that show, Mark Linn-Baker,) was dreadfully mis-cast as Gomez. I can’t put my finger on it, (besides that he’s not a singer,) but he just missed. (On the way home, Lyndsey matter-of-factly stated, “I don’t know if I got Spanish accent from him.”) His portrayal of Gomez as a sweet, loving father did come through, but it was just sort-of all over the place. Perhaps the uber-hot theatre was getting to him, as well, which is a real possibility that I have to take into account. 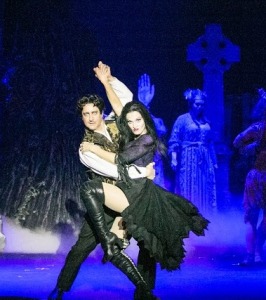 Rachel York looked great and perfect for the role, and may be a Broadway singer, but her portrayal of Morticia was just kind-of colorless. Her dancing left a lot to be desired, as well. Her tango was the big second act dance number, and it would have brought the house down had it been performed with élan.

On a lesser note, Micaela Martinez, as the pivotal character, Wednesday, played the role way too meanly. I still can’t figure out what she was going for. She showed no reason why her beau would want to be with her forever.

But even tepid performances can’t take away the body of fun this show provides. The story, the musical numbers, (especially the almost-show-stopping one performed by Tracy Rowe Mutz as “Alice” near the end of Act I,) the sets, and the clever quips are what makes The Addams Family Musical special. And exactly why you should see it in Southern California while you have the chance.