Trending
You are at:Home»THEATRE»THEATRE: THE 39 STEPS
By Karen Salkin on April 28, 2017 · THEATRE

Let me not bury the headlines on this one—the next two nights are your last chance to see this fun show, and—get ready for it—it’s absolutely free to everyone!!! So, now let me tell you all about The 39 Steps.

I absolutely adore old movies. I could just sit on the couch all day, especially if it’s raining or dark out, and watch 24 hours of TCM. And actually have done so, on more occasions than I care to admit. 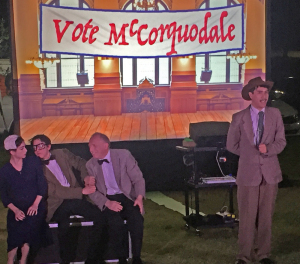 But, alas, I haven’t had time to watch even one a month for a long while, and I really do miss them. So, when I learned of this live production of The 39 Steps in Glendale, based on Alfred Hitchcock’s classic black-and-white 1935(!) film starring Robert Donat, I was thrilled. [Note: I remind you that there are only two more performances of this show from Dean Productions, and they’re both this week-end! Info is at the bottom of the page, so don’t wait to get your tickets.]

In addition to having seen the movie several times, I also saw this same stage show (by a different company) at the Ahmanson…seven years ago! So, I knew sort-of what to expect. 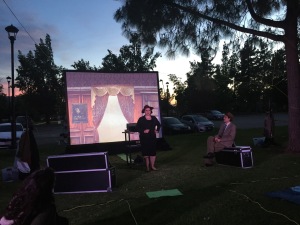 There’s no way any theatre can mount The 39 Steps as presented in the film—that would be crazy to even attempt such a thing! So the show is done as a farce, rather than a thriller. And it’s a hoot and a half! This one is even more ambitious than the previous production I saw of it because it’s outside, in Brand Park in Glendale! What a fun atmosphere! (More on that in a little bit.)

There are only a handful of actors, most of whom perform many roles, and it’s all high energy (ala Monty Python.) There are so many clever touches, too.

The weird thing for me is that even though I’ve seen the film many times, I don’t actually love this early one from Hitchcock. It makes me nervous. Just as I always use the show 24 as my basis to ask people to “Jack Bauer” it, (meaning just listen to my instructions and follow them perfectly, right away, with no questions asked,) I also use The 39 Steps to show others how to trust no one. (What is it with these titles that feature numbers?) So, I was already greatly familiar with the story going in, and was curious to see how they would do this very complicated movie…in a park! 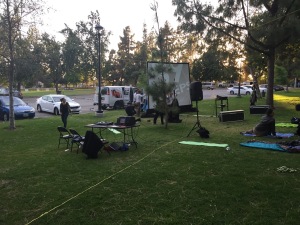 The Dean Productions crew, setting up their show in Brand Park. Photo by Karen Salkin.

I give the Dean Productions crew tons of credit; this is a gargantuan effort! The whole thing is so well-done, which I can’t imagine is easy to accomplish outdoors. They put up a giant screen for all the clever backgrounds, which is a project unto itself. And the night that my friend Alice and I saw it, the wind was so ferocious that our car was shaking violently on the way there. But the actors and crew really rose above. They made it all so fun and charming that we forgot all about the crazy weather.  (It actually added to the ambiance!)

And this venue makes the whole experience extra special. It’s just on the grass in Brand Park, right near the beautiful library building. Everyone brings blankets and/or lawn chairs; one group near us even brought pillows to lie on! The company sells cookies and drinks, but I recommend packing a picnic. We noticed some people with full-on spreads, but Alice and I were happy with our popcorn, crackers, sweet snacks, and hot chocolate—what a combo, eh? There’s just something about that environment that made it all taste better than at home or in the movies.

Happily, there’s also plenty of free parking in the park, especially right near this location. And for once in this town, the attire is beyond casual.  I have a feeling they wouldn’t even mind if you showed-up in pajamas!!! 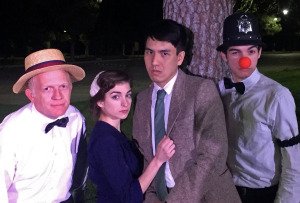 Some of the actors. Photo by Madison Strasser.

I definitely recommend this show to everyone, especially Hitchcock-philes. I would suggest that you see the film before you go, but, as the last two performances are tonight and tomorrow night, there’s no time. So just go with the flow. (But definitely see the film, too, somewhere down the line, even though you’ll know what happens. It’s a whole different adventure.)

You can’t go wrong with the beautiful outdoors, Hitchcock, and a totally free wonderful theatre performance. So, go and enjoy The 39 Steps this week-end! And bring along a wind-breaker, just in case.