Trending
You are at:Home»THEATRE»THEATRE: SOUTH PACIFIC
By Karen Salkin on June 8, 2010 · THEATRE

Like A Chorus Line (which I reviewed last week,) South Pacific is one Broadway musical that everyone must see at least once. Even more so for South Pacific, in my opinion, as it’s been around much longer, and is one of the all-time greats, music-wise. 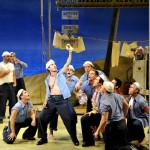 Story-wise, though, I hadn’t realized that it was about racism. I was sitting at the Ahmanson Theatre in shock! I even researched it when I got home because I had a fleeting thought that perhaps someone had updated it. I hadn’t seen any production of the show since I was a little girl, and I guess I was more fascinated, back then, with how a lady could wash her hair onstage rather than who could marry whom. [Two notes: 1) That last part, and my plotline in the next paragraph, are said from a kid’s perspective; I don’t use “lady” and “rich foreign man” in my current writings! And 2) I’m still just as fascinated by how they do that hair-washing number!]

I doubt that I’m spoiling the story for anyone, but if you don’t want to know anything about the plot, just skip to the next paragraph. I remembered that Nellie, the army nurse leading lady, didn’t want to marry the rich foreign man, but I thought it was just because he was old! I swear–I never heard them use the word “colored” in relation to his kids! And I thought that the young Lt. Cable was indeed going to marry his island sweetheart. I never heard him say that he couldn’t, when I was a kid. Or I just blocked all the racism out. (Hey–I couldn’t even figure out the racial aspect of Finian’s Rainbow! And part of the time, an actor was in black face!!!) [Note: None of this is because I was dumb–it’s because I seriously didn’t know of racism back then. My parents were like me–inclusive of everyone. Well, I have to admit that now I am a tad prejudiced against two groups: Hare Krishna and rude child actors.]

But back to this beautifully-staged production at the Ahmanson. The sets were resplendent and much easier to move than they looked. My favorite aspect was that often the actors in the background of a scene reminded me of the Pageant of the Masters, where people make-up the components of master paintings. Each actor took a position in the scenes here, and held them, making each set look like a work of art. I loved that!

Also, they cast an excellent Nellie. Carmen Cusack had such a Mary Martin (the original Nellie) kind-of voice. I can’t believe she never played Peter Pan, especially because she’s so petite. You could tell by her talking voice that she’s a good singer. That last sentence also applies to Rod Gilfry, the older man love interest, though he looked too young for the assignment.

I must be mellowing a bit because I actually hate to report that one cast member was weak, but I must be honest. Anderson Davis, who played the important role of Lt. Cable, was just all wrong to me. His looks were okay, (he actually looked like an older version of my handsome nephew, David,) but his singing left tons to be desired. And he didn’t stand-up straight, especially noticeable when he was shirtless. I was cringing in my seat. (I have a feeling that Matthew Morrison, from Glee, was perfect in the role in the recent Lincoln Center revival. It was interesting to see him in the audience on opening night at the Ahmanson.)

But his love interest, played by Sumie Maeda, was so graceful in her pantomime to Happy Talk, that she semi made-up for him. I could have just watched her hands move all night.

I do have one bone to pick with this touring production, especially now that I know that the race of the children is central to the action. The ones who are cast as the Polynesian youngsters appear to be African-American, which ruins what’s going on. I really hate it when ethnicities aren’t portrayed correctly, in order to have a politically-correct cast. I always joke that in this day and age of cross-over acting jobs, I’m going to star in Raisin In The Sun! On a recent episode of Glee, the character played by Kristin Chenoweth says that she’s going to mount an all-white production of The Wiz. Those are just jokes, of course, because all those parts are meant to be played by black actors, and no other ethnicity would work. That’s how I feel about all roles that require white actors. It won’t hurt anyone’s feelings, and will make it easier for theatre newbies to understand. There may not be any Polynesian, or more specifically, Melanesian, child actors around, but Asian or Spanish children would look closer to the intent of the script. I’m just saying.

There’s not much more to say. A wonderful entertainment PR man pal of mine, Michael Sterling, who knows more about musicals than all of the rest of us put together, wrote this to me, after the opening: “The show was absolutely extraordinary and made this man cry like a baby. I’ve seen it a half dozen times or so in my life, but seeing the all new, rejuvenated 2008 Broadway revival this week … was like never having seen it before.”

Since I can’t put it as brilliantly as he did, I just say: go see it while you have the opportunity. Fun sets, great music, wonderful voices, and colorful costumes. What more does a theatre-goer need? (Except to sit next to, and behind, a polite patron with flat hair and no perfume.)

Note: I rarely do previews, but I really feel an upcoming event at the Music Center, the same downtown complex that houses the Ahmanson and Taper theatres, is worth knowing about. It’s Shen Yun, and runs July 8-11 at the Dorothy Chandler Pavilion. The press release describes it thusly: “Shen Yun Performing Arts takes you on a magical journey spanning 5,000 years of traditional Chinese culture, with a breathtaking blend of music, costumes and performers, transporting you through China’s magnificent dynasties via song and dance.”

I know that my mouth is watering to see it, so I think I can safely recommend it, sight unseen. I’ll review it right after opening night, if you want me to go first, but I have high hopes for it’s greatness.