Trending
You are at:Home»THEATRE»THEATRE: SOMETHING ROTTEN
By Karen Salkin on November 28, 2017 · THEATRE

It’s now been a week since the opening night of Something Rotten at the Ahmanson Theatre in downtown L.A., but I keep re-writing my review of it because I want this to be as good as this musical itself! I finally realized that that’s never going to happen, because Something Rotten is the greatest show I have ever seen!!!!!!! So, dear readers, even yours truly cannot live up to it. Please just know that the production is even better than I’m telling you.

First of all, the Ahmanson Theatre has just gone for the theatre trifecta—this is their third beyond-fabulous production in a row! Keep up the great work, guys! (And the two before it were really good, as well; just not as special as this last trio.) 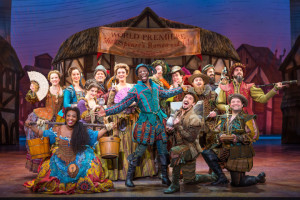 Second of all, you’re an idiot if you’re anywhere near Southern California for the rest of the year, and miss this show. Or see it and are not floored by its absolute brilliance! On every level—I’ve rarely seen such a completely talented production, (which is bad syntax, but you get the gist,) outside of my previous favorite Broadway show–The Drowsy Chaperone.  For so many years now, I didn’t think anything could get any better than that, but Something Rotten actually surpasses it a bit. Which makes sense since they share director/choreographer Casey Nicholaw. What a talent he is! [Note #1: How Fun Home beat Something Rotten in any category at the 2015 Tonys, let alone five of them, is beyond a mystery to me.] [Note #2: Don’t worry–I’m still Karen—which means that Peter Pan and Beauty and the Beast are close behind these other two as my all-time favorites.]

I was so madly in love with the downright brilliance I was witnessing that I could barely write any notes—I didn’t want to take my eyes off the stage for even one second! So, please bear with me as I try to cover all the greatness of Something Rotten from memory. And this time, I just may give up going in chronological order on a review. This show knocked what little bit of “normal” I had left right out of me! [Note #3: Mr. X just asked me why I was having such a hard time writing this review. He pondered that I broke my exclamation point key because he knows that I want to throw a whole bunch after every single sentence of this review to show you guys just how in love with this show I am!!!!!! (No luck for him though, who hates those punctuation marks, because see? They still work!)] 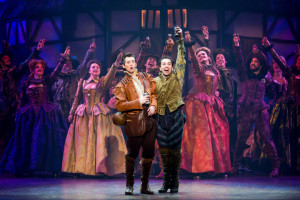 My head hurt from how brilliant the writers are!  How can mere humans come up with this stuff? The storyline and writing is extraordinarily clever and the song lyrics are pure genius! What a creative team this is—Karey Kirkpatrick and John O’Farrell wrote the book, with music and lyrics by Karey and Wayne Kirkpatrick, who are the brothers who came up with the whole shebang to begin with! (They had me at siblings getting along!) And then it was all brought vividly to life, by the aforementioned director/choreographer Casey Nicholaw. Wow, to it all. (With sentences like that last one I just wrote, can you see why I’m so impressed with such inventive writing?)

This is how riotous this show is–I still can’t believe that Mel Brooks didn’t write it! In the tiniest of ways, (in that it hilariously skewers a historical period,) it reminded me a tad of Springtime for Hitler, the supposedly-bad, but downright side-splitting musical that the producers come up with to lose money in The Producers. That may sound weird, (it sort-of does to me,) but I mean it as a major compliment. 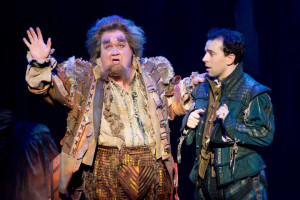 And this is how outstanding Something Rotten is—on opening night, we gave it a standing ovation...in the middle of the first act!!!! I’ve seen that done only one other time in my entire theatre-going life, which is practically since I was born. I have a feeling that every audience who sees this show does that, but I can vouch for only mine. The incredible song we all spontaneously sprang to our feet for is A Musical; trust me, you’ll know which one it is instantly. If the show had been over after just that one big production number, we would have still all gone home happy.

I honestly don’t think I’ve ever seen so many truly talented people in one place before. Every single person on stage can sing, dance, act, and be funny. Let’s face it–there’s usually at least one lemon in every bunch, who makes you wonder what they did to get the job. But there are no producer’s cousin’s best friend’s nephew’s girlfriends in this show. Everyone gives his or her all, without being obnoxious and/or full of themselves. 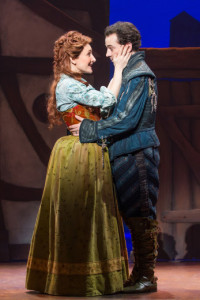 All the leads do stand-out, though. The star, Rob McClure, is perfect. And here’s a little casting tidbit that you just know I absolutely adore—he and Maggie Lakis, the wonderful actress who plays his wife, are…real-life spouses! I thought their on-stage kisses seemed a little too juicy to be just castmates! (God, I love being right!)

I must also laud Adam Pascal (Shakespeare,) Blake Hammond (Nostradamus,) Josh Grisetti (Josh,) Autumn Hurlbert (Portia,) and Scott Cote (Brother Jeremiah.) And I loved the fabulous voice of Nick Rashad Burroughs, who, as the Minstrel, starts the show off on the perfect note.

Okay, you know that I’m not going to give you the play-by-play, as most other critics do who don’t mind ruining your experience of a show, just to prove that they understood what they saw. (Makes you wonder what their high school life was like, right?) But you might want to be aware that the story involves Shakespeare and his writing. And that it’s a laugh riot. That’s all you really need to know going in. (And that I’m telling you to see it, of course!) You do not even need to know much about Shakespeare’s plays beforehand. (But a slight knowledge of Broadway musicals through the years will be beneficial.) 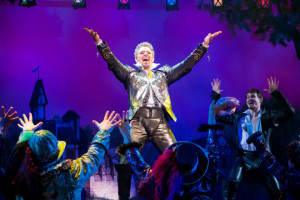 I do have to tell you about one song, though. In a different review that I wrote just a week and a half ago, I confessed that I am not a fan of Shakespeare, something that most others are loathe to admit, even though, let’s face it, I cannot be the only bard-eschewer on earth. So when the lead guy started singing God, I Hate Shakespeare, I guffawed the loudest of the entire assemblage! Finally hearing someone else, even a fictional character, who doesn’t mean it in the same way that I do, admit they hate Shakespeare is music to my ears! And, since it’s the second number in the show, I knew right away that I was in for a fun night.

For once, I barely noticed the set or costumes, outside of the hilarious codpieces, because I was so mesmerized by the action. All the technical categories are strong, but when I’m really seeing a show’s sets and costumes, that usually means that I’m not engrossed in the production, which is the case with most theatre presentations I review. So I’m glad that they were not my main focus in this one. (But those codpieces really are a riot.) 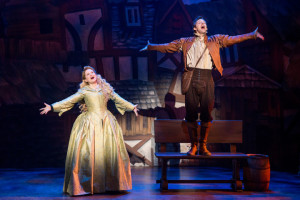 Okay people, this is the definitive statement of just how much I loved Something Rotten: there was constant mention of, (along with visuals—eww,) of my most dreaded thing on earth, which I’m sure you regular readers know what it is—e-words!!! (For you newbies to this e-zine, I can’t even type the word, but they’re those little white ovals that people usually eat for breakfast, often in the form of an omelette. Ugh.) And I got through it without getting nauseous! And with laughing my butt off!!! For me to love a show where those hens’ products feature prominently in the story is proof of my admiration. [Sidebar: There’s a music producer who had a crush on me back when I was doing my TV show. (Actually, who didn’t?!) He told me that, to make me leave Mr. X, to give himself a chance with me, he planned to send me a dozen e-words and sign the card… “Love, Mr. X!” That’s how much I hate those things! Good idea, but I know Mr. X would never do such a thing. Wait—maybe, at this point in our long relationship, I shouldn’t give him any ideas!] 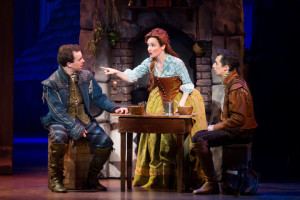 Bottom line here: Go see Something Rotten! I’m hoping to go back at least one more time while I have the chance. And it being in town now is perfect timing—what a wonderful holiday gift tickets to this show will be!

It’s here until the day of New Year’s Eve, (even though I’ve been begging the Ahmanson to extend the run.) So if you want to do something New Year’s Eve-y, but don’t want to go out at night, see this show that afternoon. You’ll be so exhausted from their exertion that you’ll be happy to go home and stay in yourself that night. And re-run the whole magical experience in your head, as I’ve been doing for a week now! Something Rotten is really something special!