Trending
You are at:Home»THEATRE»THEATRE: SMOKEY JOE’S CAFÉ
By Karen Salkin on September 26, 2013 · THEATRE

If you’re a fan of music from the 50s and 60s, this is the show for you. And if you’re not, what’s wrong with you? I knew only half the songs in this musical revue at the Pasadena Playhouse, and I still loved it.

Every single song, save for one, (which had one other collaborator,) was composed by Mike Stoller and Jerry Leiber, one of the most prolific song writing teams ever. There are thirty-nine numbers in all, so there’s something for everyone. From Elvis’s Jailhouse Rock to Ben E King’s Stand By Me, this musical revue is pure entertainment. (Sidebar: On the way to the theater for opening night, my friend was saying that she was tired and was worried that she might miss the action by closing her eyes for a little while. The weird thing is that, ten minutes into the show, when she realized it was all music and no talking, which meant she could space out if she wanted to, she snapped right to attention!)

So, for those of you in the same boat as my nescient pal, let me explain this most simple of concepts for Smokey Joe’s Café: there are thirty-nine famous Leiber and Stoller songs performed by five males and four females, of several ages and ethnicity. And builds! The cast pretty much has it covered for performing in a variety of configurations; there are duets, group numbers, quartets, and, of course, solos. Some numbers are serious, some comedic, and several of them provide special moments that I don’t want to spoil for you.

The surprising, and satisfying, revelation for me was that all nine cast members are extremely talented. In rosters of this size, there’s usually at least one weak one in the bunch, but not in this case. Each singer brought something different; there were varying degrees of dance, sexiness, and humor. And they all kept our interest. 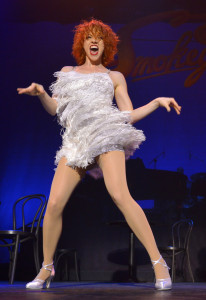 As much as I enjoyed the entire show, there were five highlights for me. On the female side, Carly Thomas Smith had the best actual voice, Kyra Little Da Costa had one dance number in Act Two, (to Spanish Harlem,) that took my breath away, and Adrianna Rose Lyons, (who could play Bernadette Peters someday,) had the knock-out number, Teach Me How To Shimmy, (which is the only one I remembered from seeing this show in the ’90s.)

Not that it’s a battle of the sexes, but the two stand-out numbers were from the guys. On Broadway, performed as a soulful quartet, should have been the last number of Act One, because the two that came after it could not compete. I’m assuming that the powers-that-be over there wanted to end the act with the entire cast on stage, but I really think that that was a mistake, because you could just feel the audience wanting to get up and discuss what they had just seen after the four guys finished their slick and colorful rendition of On Broadway. It was hard to sit in your seat and be polite to the people on stage after that one. (It was like the first revue I ever saw Adam Lambert in, way before he was famous. The genius that put that together had him come on midway through the second act, and not one audience member paid attention to anyone who came after him. A semi-famous guy they chose to close that show told people backstage that he will never follow Adam Lambert again, which none of us can blame him for.) 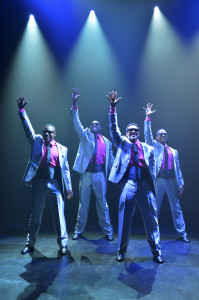 On Broadway. Photo by Kevin Berne.

But the absolute show-stopper of Smokey Joe’s Café was LaVance Colley performing I Who Have Nothing. The audience was on its feet, screaming and cheering, way before he was done. How this dude isn’t a star in his own right is a mystery to me. He needs to audition for America’s Got Talent next year so everyone can enjoy what he has to offer.

But more than anything else about this show, I’m absolutely awed by the fact that all these songs were written by just two men!!! They could have never thought of anything else for all those years! When you hear their catalog in a row like this, you can’t help but be floored by all the hard work that must have gone into their accomplishments.

One of the perks of seeing Smokey Joe’s Café on opening night was getting to hear Mike Stoller’s brief on-stage speech after the curtain. He was as charming as usual, (I’ve gotten to enjoy his company several times over the years,) and his closing line was a classic. He said he needed to speak to Jerry, (his deceased songwriting partner,) for a second, so he looked up to the heavens and said, “Jerry, we fooled them again.” So simple and so perfect.

There was a lovely post-show reception on the patio after, but we didn’t get to stay long. I had a setback with my injured hands during intermission, when two enthusiastic old pals didn’t notice the bandages, so they grabbed and squeezed both hands. I got through the second act with a bag of ice from the outdoor bar, but, sadly, I couldn’t stay at the crowded soirée. I had already talked to Mike and his lovely wife Corky during intermission, so I was good to go. But I hated missing the fun food, such was burgers and fries and make your own sundaes, which were reminiscent of ’50s malt shops, to go along with the theme of the show. Props to whomever came up with that fare because I’m sure it was really enjoyed by the invited guests. (And by some crashers I spotted, as well!)