Trending
You are at:Home»THEATRE»THEATRE: SEVEN BRIDES FOR SEVEN BROTHERS (AND OTHER THEATRE NEWS)
By Karen Salkin on October 6, 2011 · THEATRE

SEVEN BRIDES FOR SEVEN BROTHERS (AND OTHER THEATRE NEWS)

In junior high school in Brooklyn, my classmates and I were treated to seeing an old movie in the auditorium, for the “seventh grade film day.” Everyone was excited…until we got there. It was a very old MGM musical, Seven Brides For Seven Brothers, and of course, the boys wanted no part of it. So, teen-age hormones being what they are, the girls went along with the non-cooperation.

As much as I was already boy-crazy, I was thrilled about the film. My parents always filled our lives with culture, and seeing an old movie musical on a big screen was heaven to me. So, I blocked out everyone’s snide remarks and honed in on the film action, like a scene out of Cinema Paradiso.

So, here it is, many years later, and the stage version of the movie musical just opened at the Glendale Centre Theatre. I panicked expecting a similar reaction from my potential invitees, but lo and behold, I came up with a pal who absolutely loves that movie!!! And, I’m happy to report, we both really enjoyed this production.

So much so that I didn’t even take one second during it to write notes! I think that’s a first. The show, and whole production, was charming, with great staging, excellent choreography by Lee Martino for the limited space (and actors’ dancing abilities,) colorful costumes (which were color-coordinated by couple–you know I loved that!!!,) and cute “throw-ins,” which I usually think are goony. It all worked.

And the star, Jason W. Webb, has a wonderful “Jean Valjean” type of voice and presence. (Jean’s the main character from Les Miserables, for those of you not in the theatre know.) I’d love to hear Jason sing the beautiful song from that show, Bring Him Home, sometime.

The premise is that seven mountain men brothers want brides, basically, and it goes from there. As Len Goodman, head judge on Dancing With The Stars, loves, there was no “messing about” at the beginning—they got right into the story, which brings the audience in from the get-go. It’s all controlled silliness from there, which everyone seemed to love. We were never bored, and even had smiles on our faces for most of it.

As with all shows, there are a few weaknesses, like main bride Milly’s ill-fitting costumes (which her bad posture doesn’t help,) but overall, it’s such a happy experience that they don’t amount to enough to speak of.

And, in case you missed my review of their production of 1776, I absolutely love this theatre! (My admiration of it is described in the first few paragraphs here: www.itsnotaboutme.tv/news/2011/06/28/theatre-1776/) My only problem with it is the North Pole-esque temperature, but, if you ask the right person, they really do work it out for you. Just remember to dress in layers, and you’ll be as fine as their shows.

This new, original musical musical that opened at the wonderful Pasadena Playhouse recently was not my cup of tea, but the rest of the audience gave it a standing ovation on opening night, so there you go. I didn’t hate it–I just couldn’t find anything to recommend it. It may be okay for theatre newbies, though, because it was pretty basic all around–kind-of like Stage Musicals 101. 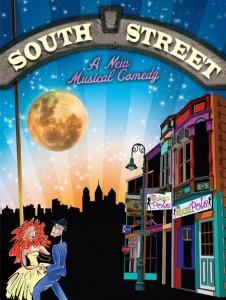 The one interesting aspect was the use of pole dancing. I’ve never seen that in a musical before! Although the girls who did it could really benefit from lessons with Steven Retchless, the beautiful male pole dancer who was on America’s Got Talent this past summer, it was still a fun addition to a stage show, I’m sure especially for the males in attendance. Their wives probably force some of them to go the theatre, so they got a bonus with with this one!

The fun part of the evening for me was the after-party in the historic courtyard of the Playhouse. It was beautiful weather and, this time, the entire assemblage was invited, which was a nice touch. All their parties are good, but this one featured several food stations by different caterers.

The salad and cupcakes were absolutely delicious, but, sadly, due to stupid car trouble that was distracting us, (don’t ask—we had to get a Gumby-guy to shimmy though a slight crack in the door to let us in!,) I never got to take any pictures of them. Or the rest of the party, for that matter. But here’s the info on them: The salads (and meat and cheese sandwiches, that were excellent, as well,) were done by tender greens, which I reviewed a couple of years ago when I was the restaurant critic for The Culver City News and The Blue Pacific News.

And those wonderful cupcakes were by Sugar Fix in Old Town Pasadena. I’m telling you, those were the best cupcakes I’ve had possibly ever! Next time I got to the Playhouse, I’ll try to make time to go early and see what else this bakery has to offer. Then, no matter what is happening on the stage, yay or nay, I’ll be smiling through the performance.

For you crazy Wicked fans, (you know who you are!,) and the few people, (like Mr. X!,) who have never seen the show before, it’s coming to the Pantages on November 30 for two months. 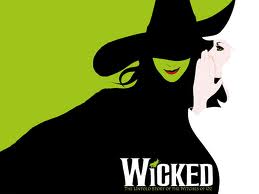 To celebrate, the theatre held a fun daytime event recently with snacks, give-aways, and a karaoke contest, where, I must say, at least half the contestants were really pretty good.

I was lucky enough to see it when my favorite performer in the world, Adam Lambert, was in it…in the chorus!!! When he told me that he was the understudy for the lead guy, I boycotted for awhile because I couldn’t believe that any production people were stupid enough to not give him a starring role. But he was really happy about it, being the lovely guy that he is, so I finally broke down and went to it. But I spent most of the time listening for his amazing voice to rise above the others.

So now, with Adam established as a star in the music biz, with no time to do musicals, this time I can see Wicked and actually pay attention to the show. I’m really looking forward to it. And to seeing you there!