Trending
You are at:Home»THEATRE»THEATRE: SAUGERTIES
By Karen Salkin on August 21, 2019 · THEATRE

We Angelenos are privileged to have occasional opportunities to see accomplished and currently-working actors ply their trade up-close. And the two-character play, Saugerties, at the Hudson Theatre in Hollywood, affords us just such an opportunity. And this pair of thespians could not be better. It certainly does not hurt that they’re both so attractive!

Both actors have numerous credits, which I’m sure you are all aware of, but I know them from only their recurring roles on network shows, so I came to their play with very few pre-conceived notions. And more lovely successful people I cannot imagine. I spoke to both of them for a bit right after the opening night performance, and it was just like talking with friends. Neither one had any pretense. 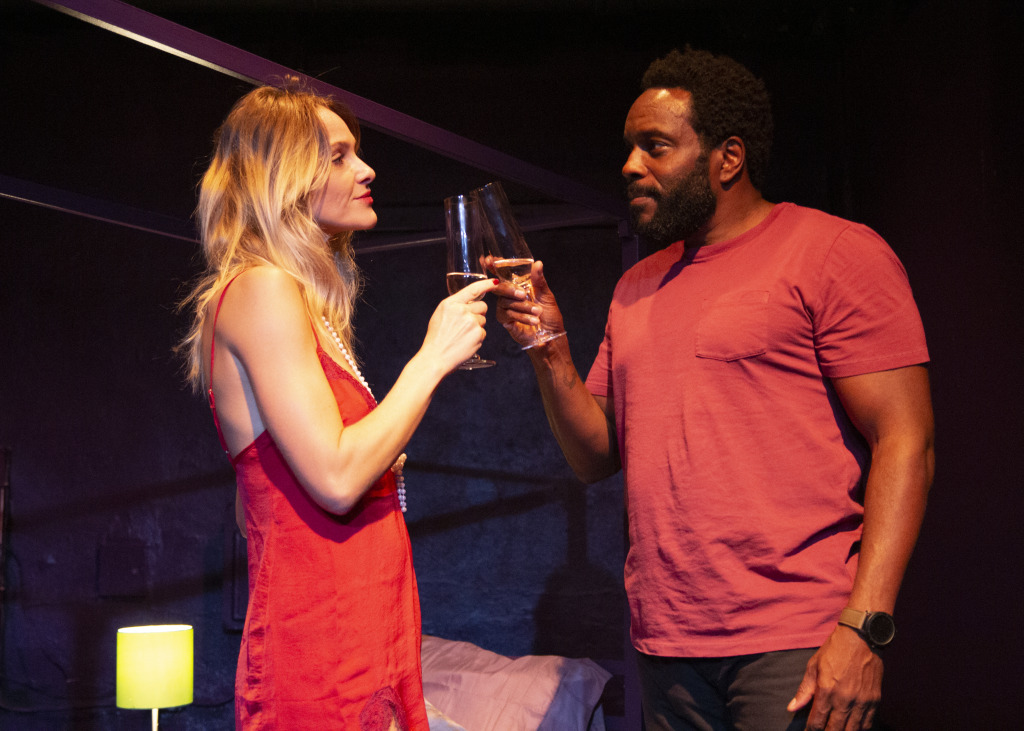 Beau Garrett and Chad L. Coleman. Photo by Pei-Yu Lai, as is the big one at the top of the page.

While Chad L. Coleman has done quite a bit of theatre, (including appearing in the revival of August Wilson’s Joe Turner’s Come and Gone on Broadway,) former model Beau Garrett told me that this is her very first stage show because she wanted to have that experience in her career, and she’s happy to be doing it.

Chad has more credits than I have adorable sneakers!  And that’s saying something.  In addition to that Broadway show, his impressive body of work includes playing Tyreese on The Walking Dead, Dennis “Cutty” Wise on The Wire, and currently Klyden on The Orville. (I guess his specialty is working on shows that begin with “The!”) But CW fan moi knows him from only that network’s show, All American, (which I’m probably the only grown-up who watches!) And even though Taye Diggs, the actor who play’s Chad’s love rival on that show, follows me on Twitter, I’m still rooting for Chad’s character to win out, especially now that I’ve met him.

Chad is a really interesting guy. He told me that he had recently done a short film version of Saugerties in Europe with his ex-girlfriend as his co-star, so he’s been invested in this project for awhile. But even more important, (to me,) is that he’s been residing in my native Brooklyn for a long time, so we were immediate kindred spirits. And his daughter recently graduated from my same high school! That means she’s super-bright because it’s now considered one of the best schools in the country! (Remember, I said now, not when I went there!) Chad had a 6AM set call the next morning, to shoot one of his many projects, or else we would still be there rapping—there is so much to learn about him! We barely even scratched the surface. [Note: I know you guys think that I can talk to anyone at any time, and I admit that I can, but not always as happily as I did these two!] 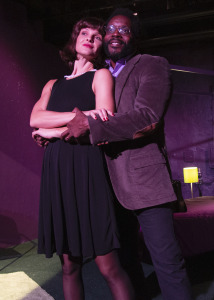 Beau Garrett and Chad L. Coleman in the second half of the show. Photo by Pei-Yu Lai.

I was already familiar with Beau Garrett from her role on the first season of The Good Doctor, but my friend Marc was thrilled to meet her because she’s on the Bravo series, Girlfriend’s Guide to Divorce. (Beau is her real name, by the way. Her parents were prescient to name her that! If my parents had possessed that same foresight, they would have named me what mon ami de France, Philippe Candeloro, has dubbed me—Madamoiselle Parle Beaucoup, which in English is Miss Talksalot!)

Beau is the sweetest thing. We chatted for a bit that night, but she was rushing home to her elderly dog, which is so commendable. My precious Clarence was eighteen when he “went to Hawaii,” (as my young friend Ronnie euphemistically calls it,) so I totally understood. But I was impressed that she still took the time to converse with us. And very pleasantly, to boot. And I love that when I told her I’m envious of her gorgeous toned arms, she told me they’re from carrying her fifty-pound dog around. (Yeah—that’s why I don’t have those muscles—Clarence weighed only eight! So I can blame my lack in that department on my beloved boy!)

Okay, not to be shallow, (but why should I change now?,) but while we’re on Beau’s biceps, which I would kill for, let’s also give props to her great back muscles, great legs, and great face. And she has absolutely no cellulite. And I could not covet her second act black dress more!!! I know I should be totally jealous of her, but she’s so darling that I’d rather have her as My New Best Friend.

And speaking of looks, I love when actors look exactly like they do on TV, and both of these peeps absolutely do. 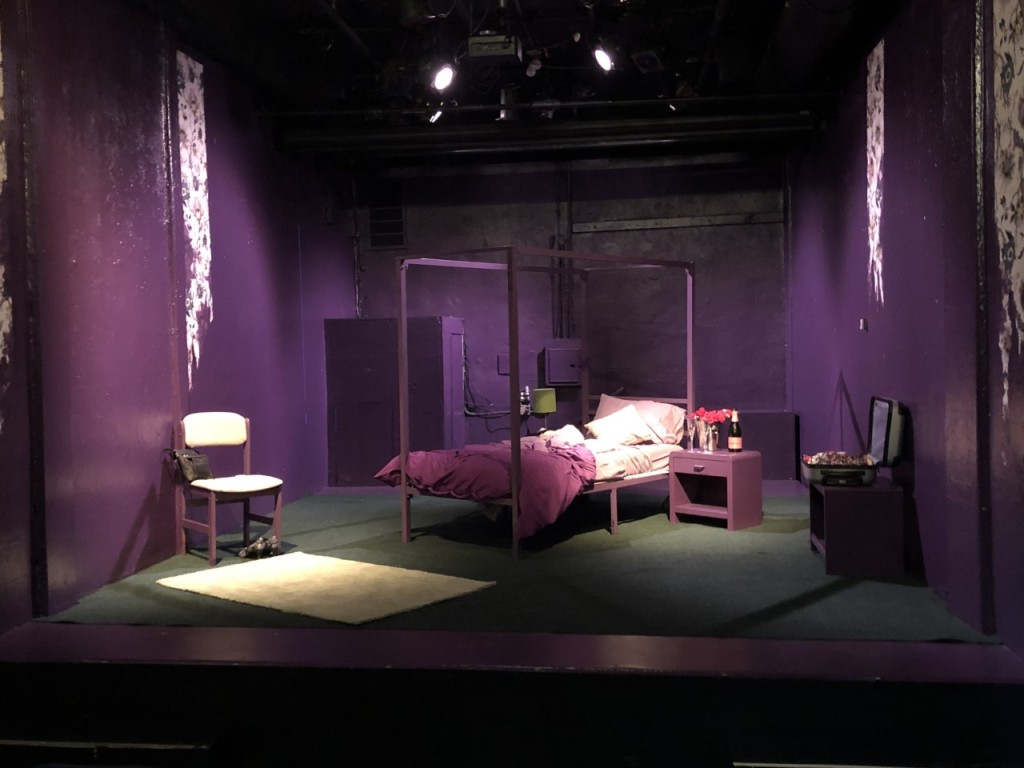 And the look of the set for Saugerties, is excellent, as well; Joseph Jin did an admirable design job while working within the limitations of such a petite space.

As to the play itself, I have to admit that Saugerties is not exactly my cup of tea. But there is a lot to it, especially for people who are into psychological dramas. It has a very interesting premise, which hit me even more when I pondered it later. And the narrative does get more interesting towards the end, when the audience is finally let in on what’s actually going on in the story. It’s kind-of like the movie The Sixth Sense in that you want to go back and re-watch the action, once you realize what has taken place. (If you attend a matinee, you can actually see it again that very evening!)

And I so appreciated the commitment of the duo. This is a very intimate theatre, but there’s no self-consciousness on that stage; I really felt that I was looking in on the private moments of a couple, rather than watching two actors perform.

But since Act II takes place twenty years after Act I, they really need to make Chad look older for that section. He does show-up rocking glasses in that second scene, but perhaps his hair should also be grayed-up a tad. Just sayin’.

Actually, I feel that the second half should be taking place more than twenty years later. So, if once you realize what’s happening, that bothers you a bit, as it did me, just tell yourself that they meant twenty-five years in the future. And then just go with the flow. 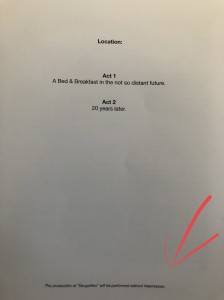 I’m not kidding about the eye test!!! Photo by Karen Salkin.

By the way, since there’s no intermission, (which I’m telling you now because the print on the information page of the program could double as an eye test,) but the characters need to change their looks a bit, it’s very interesting that Beau does hers right on stage, in the shadows, with her back turned to us. She does it so quickly and easily, and it’s actually sort-of educational–now I know how to put on a wig! I mean it!

I don’t want to ruin the story for you, so I can’t be less cryptic than I’ve been. All I will say is that Saugerties backs-up the theory that some people really do have a type. But I can say no more.

As to the somewhat odd title, I was expecting to discover some esoteric meaning to it as the piece goes on, but it turns-out that Saugerties is just a city in upstate New York, where the play is set. But now that I’m aware of its existence, I really want to stay at a bed-and-breakfast in that town!

Over the years, I’ve often visited the Hudson, (which is a trio of theatres housed in one edifice,) and had seen presentations in their two bigger spaces, but I had never been to this actual theater, the Hudson Guild, before. So I’m happy that my Hudson Theater education is finally complete with this show. I thank Saugerties for that.