Trending
You are at:Home»THEATRE»THEATRE: SANCTUARY CITY
By Karen Salkin on September 22, 2022 · THEATRE

Here’s a ringing endorsement for this State Theatre of California: My friend Laura grew up here in Los Angeles, and has been to the Pasadena Playhouse many times in her life, first with her family, and more recently with yours truly. When I invited her to join me for the opening night of their latest production, I gave her the date and time, but couldn’t remember what the show is, so I suggested she look it up before she decides. But she gave me a very quick and definite, “Yes!,” without knowing what it is she’d be seeing. When I asked why she accepted the invitation without that knowledge, she answered, “Because it’s going to be great!” I queried back, “How can you say that when you don’t even know what it is?!,” to which she responded, “Everything at the Pasadena Playhouse is great!” I love that.

I don’t know if I’d characterize Sanctuary City as exactly that, but it is interesting and entertaining, particularly when it moves from its first “monkey bars” set to a more full one. And that transition is done in such a beautiful way that that semi-entr’acte was actually my favorite part of the entire one and three-quarters hours! 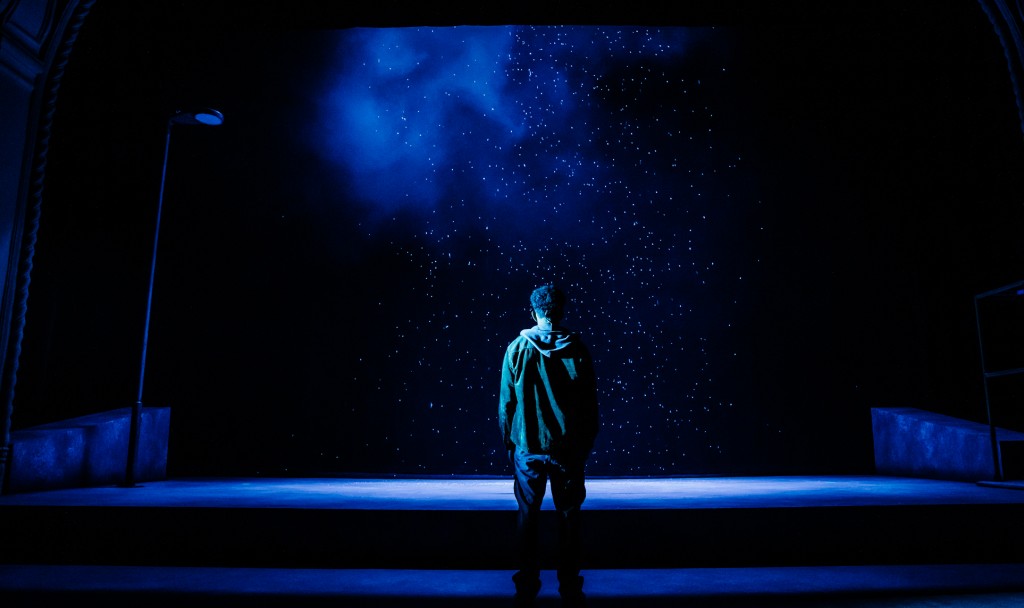 My favorite image from the show. (It gets better in the next few miutes after this pic was shot.) Photo by Jeff Lorch.

I do have to admit that it took me a while to get into the story. But you shouldn’t have the same problem because I just gave you the heads-up that the set does change eventually, even with no intermission. I was sort-of panicking, worrying that the whole show would proceed with solely the quick cuts that the first fifty minutes consist of, and my eyes and mind couldn’t take it much longer, even though the dialogue and performances are entertaining.

Those scenes are done by two of the three actors, Miles Fowler and Ana Nicolle Chavez, letting us in on their teen-age relationship and concerns over family and continuous status as illegal immigrants.

The “monkey bars” aren’t really supposed to be a jungle gym; that’s just the best way to describe the lone structure on the set. It’s meant to be parts of the male’s apartment. I don’t really understand the raison d’être for that design, but the two actors’ depiction of lying in a bed, (while actually standing-up,) is excellent! I loved those bits. 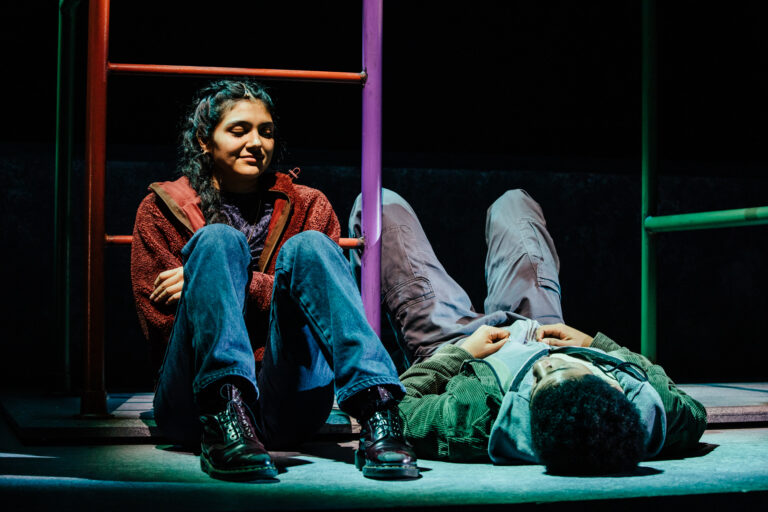 The play, as a whole, is often amusing and thought-provoking, but filled with holes. The acting is spot-on, the story entertaining, but the conflict just didn’t get to me. Let me examine why.

We have to realize for ourselves what is happening between the boy and girl, (which is what I assume their monikers, simply “B” and “G” in the programs mean,) by those snippets of their lives in the first half. Which, if you’re paying attention, you will figure out sooner or later.

The overall topic of undocumented immigrants always confuses me a bit. Just the other day, I was wondering why possibly thousands of them are being welcomed in every day, and shipped all over the country, while lone tennis player, Novak Djokovic, isn’t allowed in to play in tournaments because he’s not vaccinated. (I don’t want him to be, of course, because of that unvaccinated status. I’m just wondering what all the rules are in that category.)

I hate ruining any of the plot of Sanctuary City for people who want to just experience shows for themselves, (as I always do,) but I must tell you some of it to be able to discuss it fully. So here goes:

The second half of the story deals with if the two are going to get married, after she becomes a citizen, to keep him in the country legally and allow him to go to college, which he desperately wants to do. 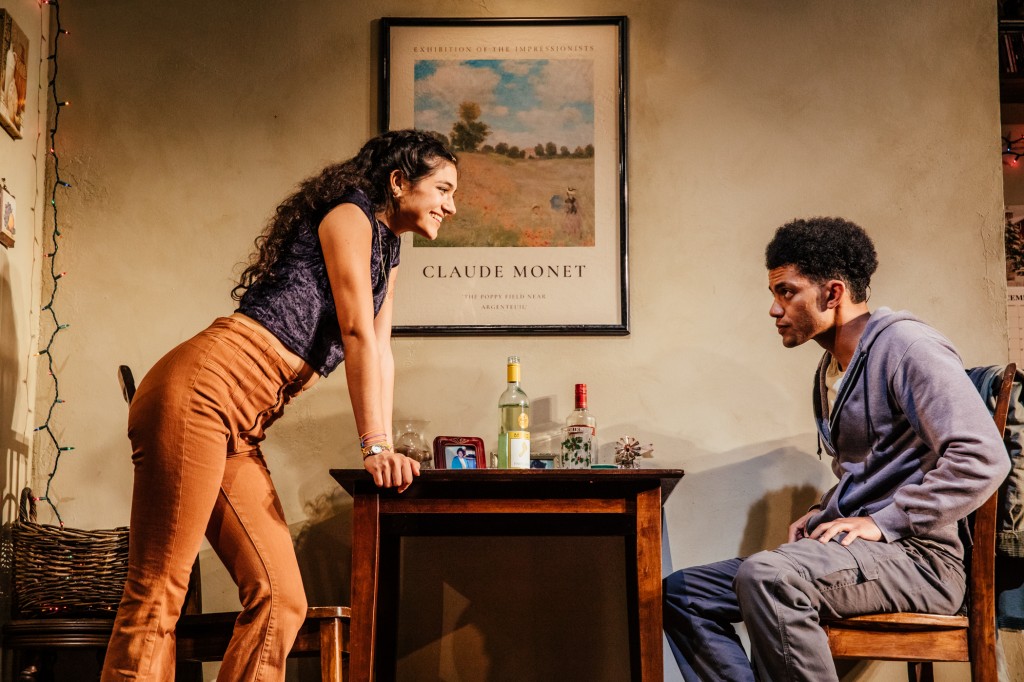 Marriage seems easy enough for the duo to do, since they’re the same age, have known each other forever, are obviously besties, and love each other in at least some way. The government can’t dispute any of that, even shortly after 9/11, when this play takes place. In real life, over the years, I’ve heard of other “needed” marriages, which could look or seem suspicious, but the one in Sanctuary City would not be that at all. It’s two eighteen-year-olds, one with a very messed-up family life, who look like they could easily be in love, who basically live together, and, I would think, have tons of classmates to witness their closeness. So it seems like there would be no problem with that particular couple getting married.

But then there would be no play. Each case of green-card-marriages is individual, of course. And this playwright is giving us her take on one possible scenario. Which I respect. So I just went with it.

But while we’re on the topic, I feel the need to discuss my feelings on that particular plot point. It doesn’t seem like it would have been a big deal back in the early-to-mid aughts, especially in a sanctuary city, which Newark, New Jersey apparently was and still is. Maybe I’m just naïve on the topic, but I used to hear about it a lot waaay back in the day. (I don’t remember anybody’s names from back then, so if the government attempts to question me, I seriously have nothing to tell them.) I met a few couples in my party days who seemed totally normal, but they’d then tell me they were really just friends and married for a green card for one of them. (Granted, those confessions usually came after the guy had hit on me, but they did turn out to be true.) Often, those duos were best friends, and not in love, but isn’t that a lot of couples’ relationships, really?

That brings me back to why it seems like the core plot-line of Sanctuary City is perhaps a weak one. The conflict doesn’t come up until about halfway into the narrative, but for those two particular characters to marry should be a no-brainer, with not much risk involved. Some of the scenario is amusing, and some heart-pulling, but it’s confusing in how much of a big deal it becomes for them. 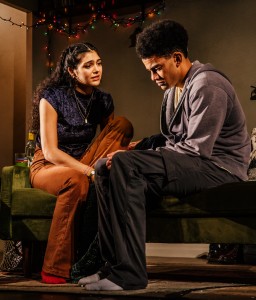 Now Spoiler Alert here on one of the holes in the story, (so possibly just scroll ahead to the paragraph that begins with “I’m not alone” if you’re planning to see it soon, which I do recommend you do): They get engaged as the girl leaves New Jersey for college in Boston, but then they don’t see each other again for three and a half years. And they’re just discussing it now?! (And not in a happy way.) Yet, they keep saying that they’ve talked on the phone every night! The topic never came up in all that time???

And why is she so scared to go through with it? She wouldn’t have been doing it for money—she is simply marrying her best friend, with whom she really does share a love! (And seems to have always been in love with.)

And she says she’s known about (a plot twist) for a few months, so why does she look so shocked when she witnesses that particular situation in person, like it’s a complete surprise to her?

I’m not alone in my wonder over that. We heard many audience members pondering that topic at the post-show reception, and Laura is still elaborating on it. (She wanted me to impart that she was also a tad annoyed that so many of the lines were repeated—a lot—but I’m assuming that’s just a dramaturgical device, so I’m okay with it.)

But all of those issues are just slight weaknesses in the writing, not the production itself. Another is that there’s no real ending, which is disappointing. 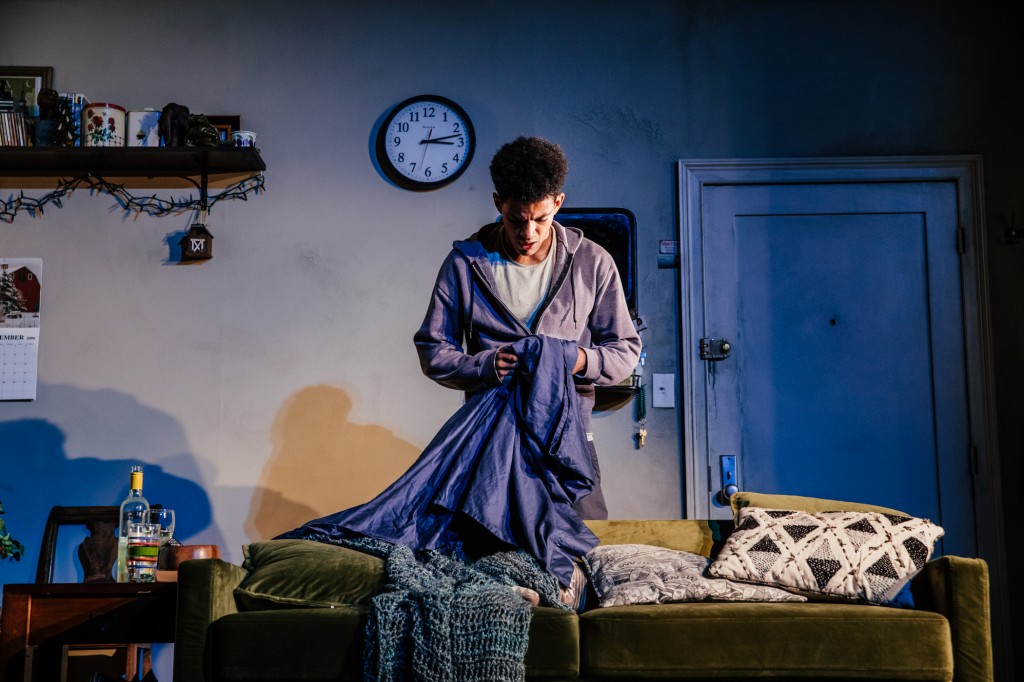 But there’s sooo much more about Sanctuary City to recommend it. The positives are that it’s entertaining, amusing, and thought-provoking. And well-acted.

Speaking of the acting, a major perk is that you get to see actors, whom you usually just see on television, work in person. That’s such a treat because, more often than not, stage presentations do not have current TV peeps in them. And Miles Fowler, Ana Nicolle Chavez, and Kanao Goo are young, so we’ll get to watch their careers grow for years to come. I really do love that. [Note: I got to watch, and know personally, Adam Lambert for years before he made it! It’s wonderful to have those memories. I predict that audiences will get some of that same pleasure with this trio.]

Both guys are on a couple of my favorite TV shows, so that made the play even more special for me. But at the same time, because I didn’t have time to read my program before the play began, it actually took my attention away a bit because I was sitting so far back that I had to constantly use binoculars to try to see their faces well enough to figure out who they are in real life. I never caught the front of Miles’ face, (he seemed to always be looking sideways, towards the characters to whom he was speaking, which is the correct thing to do,) so it drove me crazy until the show was over and I could read the program to confirm that he was, indeed, on The Resident! (I hate it when people start perusing their reading material during a show, so, of course, I wasn’t going to do that myself.) 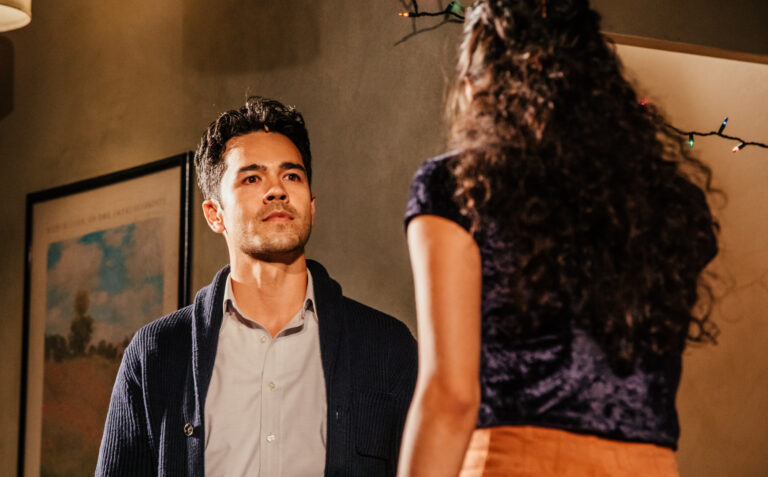 And then, when Kanoa Goo came on in the second half, I knew that I was familiar with his handsome face, but didn’t realize I knew him from The Rookie until the play was over. All this to remind you—read your programs before the show starts, people!

Even though I haven’t seen Ana Nicolle Chavez before, I also predict big things for her, and note that she looks like Zendaya, at least from that far back, which is always a good thing.

I thought of giving this review no ending, like the play, but that doesn’t feel right to me. So go see Sanctuary City at the Pasadena Playhouse, and write your own last scene. But hurry—it’s playing for just two and half more weeks!