Trending
You are at:Home»THEATRE»THEATRE: RODGERS AND HAMMERSTEIN’S CINDERELLA
By Karen Salkin on March 20, 2015 · THEATRE

Recently, Mr. X started giving me the same advice every day.  I think it began one morning when I was begging him to go to brunch with me.  Begging.  (I knew he wouldn’t go, because he hates going out, but every now and then, I give it the good old college try.)  After my hundredth plea, he just quietly said, “Let it go, girl,” which made me laugh in spite of myself. He’s said it so many times now, in regard to everything in life that I’m so desperate about, that, in addition to making me laugh every time, I think it’s actually beginning to work. 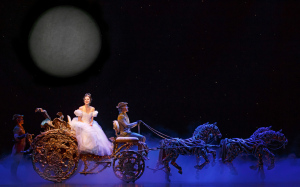 So, that’s the advice I kept hearing in my head on opening night of Cinderella at the Ahmanson Theatre, every time I started to get upset that the powers-that-be messed with my beloved classic.  I just had to let go of my pre-conceived notions, and enjoy the different re-telling of it.  I’m definitely recommending it to my Los Angeles readers, but that doesn’t stop me from wishing this production was exactly as it was originally written for television, way back in the day.  This new version was just so not what I was expecting. (But since, as this e-zine states, It’s Not About Me, I have to tell you that most of the opening night audience seemed to be really into it, flaws and all.)

If I had never seen one of the telecasts of this show, I would have probably loved this rendition.  But I think by now you all know that I’m a purist about things I love.  And I have such a good memory (knock on wood,) that even though I saw this musical on TV only once, (because it was the last year that it was telecast,) when I was a little girl, I still remember the lyrics to this day!  (Maybe because I sing them so often.)  So, I was expecting to see a stage rendition of that exact televised presentation, word for word.  Instead, I was  surprised with a nice step-sister, a horribly-voiced stepmother, lots of political stuff, and a prince who verbally hints that he’s been gay.  (He’s obviously bi, though, because he does fall in love with Cinderella.)

I’m going to get to the yin-and-yang of it all in a second, but first, I must tell you that I’ve researched Cinderella, not just recently, but at other times, like when I can’t sleep, and I research any thing I can think of.  So, I know there are many different tellings of this story, as with all fairy-tales.  I’ve never minded that Disney did it one way, several ballet companies have interpreted it differently, and the film, The Slipper and The Rose, (with music by my old pal, Richard Sherman,) has yet another take on the classic tale. Those changes I’ve always accepted.  After all, variety is the spice of life.

But when a show is billed as “Rodgers and Hammerstein’s Cinderella,” I fully anticipated seeing that exact show.  I’m not saying this adaptation was bad, (although there were some less-than-stellar components;) it was just not what I was looking forward to. So I was a tad disappointed.

But let’s get to the positives now, shall we?  The show still features the fabulous musical numbers by Rodgers and Hammerstein.  I could not stop singing that wonderful music from the moment I received the opening night invitation!  (Mr. X wanted to know why I knew all the lyrics to every single song in the score.  Silly boy.  Has he met me?!)  [Note: I was so grateful that it finally knocked-out the gorgeous music to the Dying Swan that I couldn’t get out of my head for the month since I had seen that ballet!  Don’t get me wrong–I love that music, but Cinderella has such a happier ending. (Duh!)]  It turns-out, this Broadway show also features some little-known, or totally obscure, songs from the prolific duo, so people may be interested to hear those.

In addition to the music, I loved the clever, colorful, utilitarian sets! And the quick costume changes were a joy to behold. Even the most jaded among us had to marvel at them! 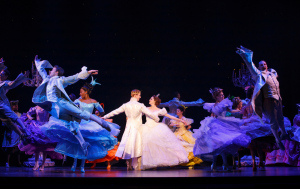 I love all musical dancing, even if this choreography was a bit simple. It was just really fun to watch. I hope you all get to experience the show while it’s in town.

Even though all but one of the people I spoke with at intermission were also scratching their heads over this staging and story additions, it seemed like the majority of the audience appreciated the modern touches.  I even found myself having a couple of chuckles over them. (The touches, not the audience members; though, if the shoe fits…) (Oh, I just realized–that could also be a Cinderella reference!)

But what almost ruined the entire experience for me was the annoying Fran Drescher, as the Evil Stepmother.  That dreadful voice can give one seizures!!!  It’s way worse than nails on a chalkboard.  She did manage to modulate her horrible nasality a tiny bit this time, but it was still pretty hard to decipher what she was saying.

Worse than her actual voice, though, were her dreadful speech and her absolutely brutal acting.  Her performance would have been bad for a high school play, let alone a professional production.  I had never seen her act before, so I was floored by just how awful she is!  How she’s gotten this far in show business is beyond me.  I have news for her–when you act, you have to make choices for your character.  Why would any actress worth her salt choose for her fairy tale character to speak like she’s from the Bronx?  Even the poor villagers spoke better than she did!!!  It was a travesty. (A few guests told me that it was hard to watch Drescher after having recently seen Cate Blanchett doing the same role in the new Cinderella movie. I can totally understand that.) 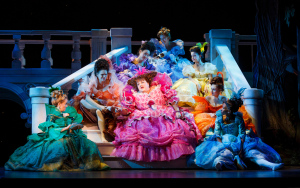 But one bad performance, no matter how glaring, doesn’t ruin an otherwise capable ensemble, in a colorful, fantastical show, as this one is, for me.

There were no negatives as egregious as that one, but there were a few other little bothers, such as that no one in the cast was particularly fabulous, and I was a bit frustrated that the lead didn’t look like what I envision Cinderella to look like.

And I think they added so many scenes, (that I believe were elements in the original French tale,) to make the show able to comfortably be two acts. But you know I would have been happier with it being just one longer act, so it would end the way it’s supposed to, (according to me.)

This may wind-up being the first version many young girls see, so I just wanted it be perfect for them, as the Lesley Ann Warren one was for me. (I think she’s who we all wanted to grow-up to be.) But, they may be disappointed when, in the future, they see what I consider to be the real version.  You never know. [Note: I’d love to find the Julie Andrews one; if any of you know how to do that, please let me know!]

So, to wrap-up the review, I say go see the show at the Ahmanson with an open mind. Just know it will be a newer, more modern, different take on the story. And enjoy it for what it is.

And lastly, being the girly-girl that I am, I have to tell you about one little beauty bit that tied into the show, by coincidence, and made me giddy with happiness!  A few weeks before the show, when I already knew that I’d be seeing it, a beautiful pink lipstick caught my eye when I was checking-out the site of my new favorite make-up company, Gerard Cosmetics.  And guess what the name of the color was???  Fairy Godmother!!!  I almost fainted!  I love magical moments like that!  If I were a little girl, you know that I would have dressed-up in fairy clothing for this show, complete with wand.  As it was, I had to hold myself back from wearing my tiara!  (And I’m not kidding!  Even a little bit!)  So, wearing this aptly-named lipstick to the theatre was my own secret little way to play dress-up.  I love this line so much that I have a feeling I’ll be telling you more deets when I suggest it as a Mother’s Day gift, but it went so well with this review, I just had to include it here, as well.  Maybe if Cinderella had had it, she wouldn’t have even needed a Fairy Godmother to help her get the Prince!