Trending
You are at:Home»THEATRE»THEATRE: ROCK OF AGES
By Karen Salkin on February 16, 2011 · THEATRE

Never a fan of rock music, I still really wanted to see the few-years-old Rock Of Ages at the Pantages. Two of my friends in New York, one a young musician and the other a rock chick from back in the day, have seen it multiple times and rave about it always. 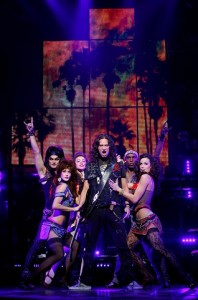 I’m glad I did. It’s just one of those happy, goofy shows that makes audiences forget their troubles and leave the theatre amid an upbeat buzz. That’s the kind-of musical I like.

In talking to several people post-show on opening night, it seemed that we all had similar reactions; we were a little disappointed during the first fifteen minutes or so, thinking that we really wanted to like it, and were getting a tad on edge about our prospects. But, as it went along, we all went along, too, with the flow, and got into it. By the second act, which was way better than the first, we were there! This show truly proved the adage “it’s not how you start, it’s how you finish.”

The story is negligible, to me, because you know it’s going to end happily, with no real pain along the way. (It’s basically about the goings-on at a music venue on the Sunset Strip in the ’80s–trust me, that’s all you need to know going in.)

The big deal about Rock Of Ages is that all the music is old mostly-famous rock songs. Shamefully, I knew only about half of them because I’ve never been into rock. And most of those I know from Glee! (I wanted to tell you guys exactly how many I knew, but I was surprised to see that the musical numbers are not listed in the Playbill! I guess that’s what the internet is for.) The audience went wild with each one.

This is actually the perfect musical to start young people on; the music will lure them into the theatre and once they see live stage performers, they’ll be hooked! That’s a great thing to be able to do for the masses.

Surprisingly to me, there were even more grown-ups than younger audience members there! I was predicting to my friend all the ones I thought would leave in intermission and I was dead wrong! Even the little old man next to me stayed and enjoyed it immensely! I thought it would be too loud for many of them, but I didn’t count on all the adults who loved this music in their youth. So, rock on! 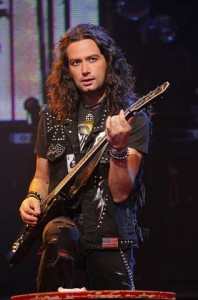 I’m glad that I got to see former American Idol contestant Constantine Maroulis reprise the role he created on Broadway, which garnered him a Tony Award nomination as Best Actor in a Musical. (He’s the only Broadway original in the touring company, and honestly, probably the only one anyone really cares about seeing, especially in fame-hungry Los Angeles.) He’s actually quite good.

I never got into him on AI until he sang the ballad My Funny Valentine and shocked even the judges. As it turns out, he was doing musicals long before his Idol run, sort-of like Adam Lambert. He just kept it under wraps. He hit one note towards the end of the show that was just gorgeous, and well worth the price of admission. 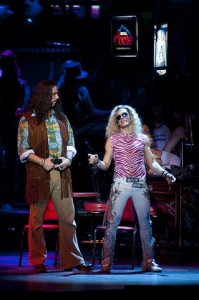 MiG is the one on the right.

The one other cast stand-out for me was MiG Ayesa as the fading rock legend, Stacee Jaxx. (I just wish the character had a more male first name, because I could barely make-out a word anyone was saying, and every time I heard “Stacee,” I thought they were talking about one of the chicks.) Besides his fun acting, when he removed his shirt (finally!,) his abs read all the way to the back of the room! I was about two-thirds back in the orchestra, and I didn’t even need my binos to make-out those babies! Yum!

I also liked the very functional set. And having the rock musicians on-stage at all times was cool. I kept worrying that they never got to sit down, though, even though I’m sure that thought never occurred to rockers.

I hate to spoil this audience surprise, but it was so fun that I have to tell you about it, so avert your eyes till the next paragraph if you don’t want to know. As you walk into the theatre, the ushers hand everyone a little flat flashlight, to use as held-high lighters, like rock audiences did back in the day. The first time that many audience members spontaneously used them, everyone started laughing, in a good way. It’s such a simple idea, yet adds so much fun. Love it!

One song note: I have always disliked the song Every Rose Has Its Thorn, but, with it being inserted into the particular action of the story in the second act, which made me listen to the words and understand it, I’m now a fan! Trust me, that’s pretty amazing for me. (It’s also one of the very few songs I could understand the words to in the show, as is the case with most rock music.)

The opening night audience, which consisted of Dancing With The Stars’ Julianne Hough, Edyta Sliwinska, and Alec Mazo, Glee cast members, Castle’s Jon Huertas, and director of the upcoming film of Rock Of Ages, Adam Shankman, along with many others, went absolutely nuts for this show. And, by the end, I was on my feet rocking out with the best of them.

If you want the same carefree experience, you better act fast–Rock Of Ages is in L.A. for only two weeks!