Trending
You are at:Home»THEATRE»THEATRE: PIRATES OF PENZANCE
By Karen Salkin on February 7, 2018 · THEATRE

There is so much to say about this new production of Pirates of Penzance at the Pasadena Playhouse! I took more notes during the show than I ever have before in all my years of reviewing theatre! So first of all, I say to go see this very different version of the musical because, on opening night, just about the entire assemblage appeared to be having a blast. 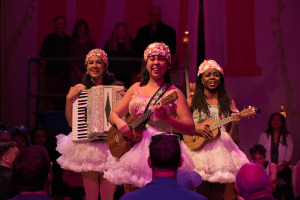 But for me personally, I have to paraphrase Lou Grant when he hired Mary Richards, and told her, “You’ve got spunk!…I hate spunk!,” by saying this show is zany…and I hate zany!!! Yes, I am aware that one of the main descriptions of my former television show, and of me when I was doing it, was “zany,” but that’s not what I was going for; it’s just how it turned-out. And I’m really a traditionalist. So this particular presentation of Gilbert and Sullivan’s classic operetta was not my cup of tea.

All that being said, I can see why everyone else liked the show. So, let’s examine the production, from top to bottom. 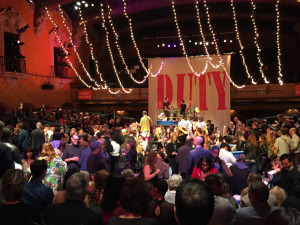 The pre-show hubbub. Photo by Karen Salkin, as is the big one at the top of the page.

First of all, the Pasadena Playhouse was reconfigured into an unrecognizable venue, which had to be an absolutely gargantuan undertaking, so I applaud them for that incredible creativity. Everyone oohed and ahhed as they entered the new arena, so the effort paid off. There was a party buzz in there all night. (More on the seating later.)

The absolute number one positive to me, though, is not the atmosphere, but rather the incredible talent of every single member of the cast! They’re a troupe of comic musicians from Chicago called The Hypocrites. And let me tell you, these people all sing beautifully and play multiple musical instruments. The lead girl plays the accordion, the ukulele, and the flute, which are such diverse instruments. And one girl even plays the saw!!! I don’t think I’ve ever seen that before except in cartoons! I love witnessing that much talent. 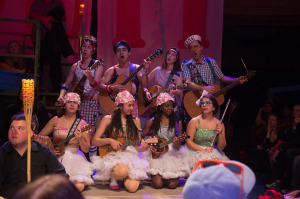 And they do all that while walking around on wooden benches. I was too far up to see the floor of the actual stage, but even from that far away, I could tell that it’s not a big area. A major part of their schtick is to keep moving around amongst the audience who surrounds their feet. Again, not my cup of tea. (But you have choices of where to sit; more on that in a second, as well.)

Back to the many more positives: The show is just about eighty minutes long, with an amusing one minute intermission. And you can wear anything there, even your pajamas; there’s no need to dress nicely (as everyone should always do otherwise to attend theatre!) And you can even check your phones during this one, (which is an absolute no-no at all other theatre, including movies,) because it’s not as dark in there as usual, and there’s so much going on at all times that you won’t be bothering anybody.

Another plus is that you can even leave in the middle of the show with no one realizing that you’re walking-out because movement is encouraged for the duration! I did see a few people sneak out, but only because I notice everything. (But for such a short show, I suggest you stay for the whole thing, no matter what you think of it.) 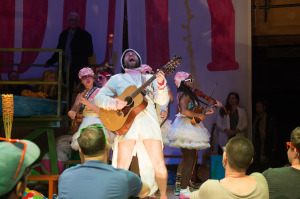 And I was very impressed with the acoustics. I was sitting almost as far back as possible, but the sound never wavered. The voices were clear the whole time, even though their actual words were not.

Which brings us to the negatives. First of all, despite the great music and singing voices, I had absolutely no idea what was going on the entire time, or who was what character. I had not researched the show before, (which I never do, so that I can experience the journey as it unfolds,) and I promise you, there is no way anyone in that audience could have understood the story. It was presented way too–shall we say “creatively”–for total comprehension.

Then there’s the seating issue. There are folding chairs on risers on three sides of the “stage.” Despite the provided small cushion on top, they’re extremely uncomfortable. My back was killing me the whole time.

Even worse, though, for people who have back issues, is to sit in what they’re calling “the promenade.” That area features benches with no backs, and little unfilled kiddie pools. And you can even park your bottom right on the edges of the stage. But the whole seating issue is a conundrum–if you sit in one of the chairs on a riser, you should be a tad more physically comfortable, but then you don’t really feel a part of the action that is the hallmark of this kind of production. But if you’re in the promenade, you have to keep moving the whole time. (The actors politely ask you to move when they need that space, which they explain at the top of the show. It’s nutty.) And, if you sit down there, you have to make sure that you can jump up at a moment’s notice. That means no coats or accessories or big purses that you’d have to gather up each time, and you can never get comfortable with your seat. But the opening night audience down there did seem to enjoy the movement, which I would have hated. 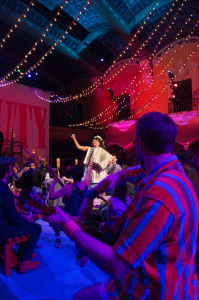 I sat almost as far up on a riser as you could go, but since I don’t like people moving around even at basketball games, this show was torture for me. I like everyone to sit down and not move when I’m trying to watch something live. (But I have a feeling that’s just me. When I was a VIP guest at a recent Rams football game, I had to sit right up front with National Anthem singer Brian McKnight, with just the field in front of us, because the other guests behind me were constantly socializing instead of just staying put and watching the game, as I was doing.)

Also, and I’m very serious about this, this is not the show for you if you have any kind of seizure disorder because there are constant twinkling lights. You cannot get away from them.

I’m also serious about this–no one will know if there’s someone who needs help in the theater at any time because people kept screaming in the middle of the show on opening night, for no apparent reason. (Maybe something was happening closer to the action that I couldn’t see from where I was.)

Many patrons will see this one as a positive, but to me, it’s a major negative: there’s a bar on one side of the floor area, where you can purchase drinks all night. So, first of all, I was not happy that I was about to be on the road with a bunch of people who had just been imbibing for the past hour and a half, which gives them no time to sober-up before getting behind a wheel. And, since no food is served, it’s very irresponsible to serve booze. I had never even thought of that before this year, when it was pointed-out to me by several party-goers. 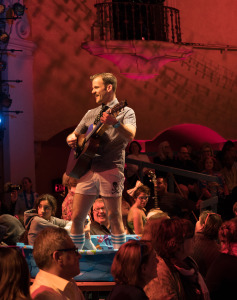 But if you are a drinker, and have ADD, this is definitely the show for you!

And then we come to the category of “neither here nor there.” For some reason they’re calling this a “beach party,” and to go with that theme, the characters are wearing shorts, and they throw beach balls around every now and then. And there are those kiddie pools on stage. Maybe that’s part of what makes it interesting to sit down there.

Also, they added bits and pieces of pop music tunes to the classic music, which is partly weird and partly amusing. For example, the show opens with the Beach Boys’ Sloop John B, to which my friend said, “Gilbert and Sullivan never heard this song.” Duh.

On a personal note, I hate being interacted with, so I’m glad that I was seated in the far riser, even though that section is so far away from the action. (But the actors do manage to get over there a time or two.) 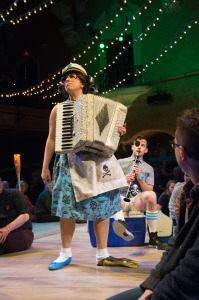 And on an even more personal note, I love that they pronounce the lead female character’s name, which is “Mabel,” as “May-belle,” because that was my mother’s nickname in later years. So, every time they invoked that moniker in the show, I had a good feeling.

Speaking of my little mo, when I was growing-up, my parents took me to more theatre than the rest of my pals have ever seen in their entire lifetimes, but I missed the boat with Pirates of Penzance. (See what I did there? Boat—pirates? I guess the goony show rubbed off on me a bit.) I would have liked to see the usual type of production of it the first time, but oh well. Since I have no idea what was going on, I may still have that opportunity in life.

And speaking of being a kid and seeing this show, there was a little girl sitting in one of the tubs down front on opening night. Watching her face during the proceedings was three-quarters of the enjoyment of the evening for me. I kept trying to see the show through her unjaded eyes. (So if you bring children with you, I think they’d love sitting in the promenade.)

Also special to me was that the theatre’s lovely usherettes appeared to having the time of their lives, which I loved seeing.

The actual scenario seems to be unimportant in this production; it’s all about the wonderful Gilbert and Sullivan music, the fabulous voices, and the wackiness of the experience. But, if you do care about the storyline, (as you should,) I suggest researching the operetta before you go (because, unlike every other theatre critic out there, I never ruin the story of a show for you just so I can prove that I know what it’s about!)

But I recommend that you definitely do see this Pirates of Penzance because it’s such an offbeat theater experience. I just wanted to make you aware of what you’re getting into.