Trending
You are at:Home»THEATRE»THEATRE: ON THE TWENTIETH CENTURY
By Karen Salkin on August 9, 2017 · THEATRE

ON THE TWENTIETH CENTURY

Right up front, let me tell you that I absolutely adore the film, Twentieth Century, on which this famous 1976 Betty Comden—Adolph Green—Cy Coleman Broadway musical is based. I don’t really love screwballs comedies, per se, but John Barrymore is such a genius that I’ve found myself watching it multiple times. So, I was a bit skeptical going in to see this little theatre rendition of the musical. 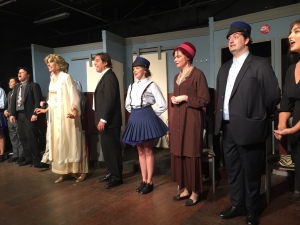 And what an ambitious undertaking for a small theatre On the Twentieth Century is!  It’s a big spectacle Broadway show.  This company cut it down to a cast of fourteen, but that number is still very overwhelming for such a small space. I really applaud the effort, especially that they did try to incorporate many of the bells and whistles from the original.

But, despite the whole shebang being a little goony, (including the story itself, which is no reflection on this company,) my friend John and I enjoyed the show, and found it entertaining.

Before I review the production itself, I have to warn you—the Pan-Andreas Theatre in Hollywood is brutally hot, especially during this LA heatwave.  There was no air-conditioning on opening night, so I have no idea what the conditions will be like for the rest of the run. But the person in charge was kind enough to let me sit right near the floor fan, and turn it right onto me, so I really thank him for that. (Otherwise, I really would have had to leave.)  So, that I enjoyed the show as much as I did despite those hot conditions says something.  And I give the entire cast props for being able to perform so well in that heat, especially in bundled-up costumes. I honestly do not know how they did it! (And one girl, Nicole Sevey, didn’t even break a sweat!!! I cannot tell you how jealous of her I was!) 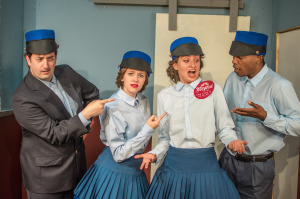 Worse than the heat, though, is that I have not been able to stop singing the title song since I saw it last week-end! I hate them for that! (I’m joking about hating them, but definitely not about singing that song non-stop. And I can’t sing!)

Speaking of singing, the entire cast can do just that, which was nice to see. Or rather, hear. And since we were sitting in the first row for once, we got to hear each person’s individual voice at different points in the show, even in group numbers. So I know what I’m talking about. 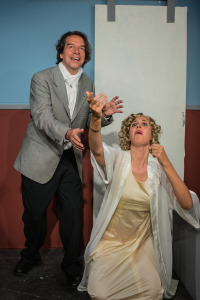 The best voice belonged to the female star of the show, Alena Barnardi. (It appears that she runs this theatre company, so she gave herself the lead. But I can see why!) She’d be perfect for a serious operetta, where she would be able to really let loose.

And I especially appreciated that there are live musicians accompanying them. And good ones at that! The actors must be thrilled to have the opportunity to work with this talented quartet.

The story is a truncated version of the movie, which begins at the start of the relationship between Broadway producer Oscar Jaffe and the girl he makes into a star in the 1920s. After a long break-up, they meet again “on the Twentieth Century,” which is a train from Chicago to New York, and the mayhem ensues. But the musical begins on the train, and stays there the whole time. There are flashbacks to what came before, but, at first, I didn’t realize that they are flashbacks, so the director may want to make those bits a tad more clear going forward.

This is how the show was written a long time ago, but I feel that it’s a bit too long for 2017 attention spans, especially in that crazy heat, so they may want to address that situation, as well. Maybe cut a song or two. 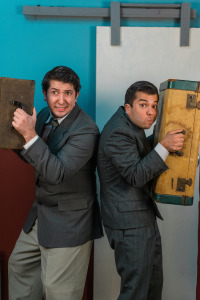 John’s favorite cast members are Rafael Orduna (doesn’t that sound like a name a baseball player would have?,) and Nate Beals, who played the two henchmen, and Wade Kelley as Oscar, who appears to be the most accomplished actor in this cast.

I can see why. Wade really does try to channel John Barrymore. But they didn’t have him say the most famous line correctly! When someone annoys the drama queen producer in it, he melodramatically warns them, “I close the iron door on you.” But, for some reason, they’re having Wade leave out the “on you,” which doesn’t come close to having the same dramatic effect. [Note: Just to make sure that Mr. X and I have always been quoting that line correctly, I looked it up, and found the most wonderful collage of all the times Barrymore said it in the film. Here’s the link, in case you’re curious www.youtube.com/watch?v=3lH6TuEOGx4. And, by the way, ever since I first saw this film, I have closed the iron door on many a person in my own life.] 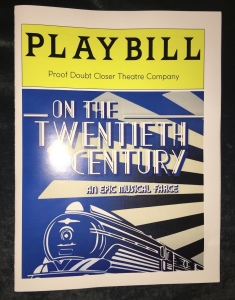 The pretty program. (That ball of white is my flash. My bad.) Photo by Karen Salkin.

I have to laud a couple of more aspects of this show. The wardrobe, by Rachel Harmon, is spot-on, for all the characters. I really got a kick out of the “suspenders” on the porters’ uniforms, which were actually ribbons that are sewn-on the shirts. Very clever.

And, because he looked like a composite of two pals of mine, with not one whit of musical talent between them, (they’re actually both in real estate,) I did not expect Phillip McBride, who plays the conductor, to sing so well. He sings only a few lines by himself, but I really admired his pipes.

The bonus of the whole experience is that this show has really attractive programs!!! They’re gigantic and contain full-color pictures of the cast. What a pleasure to read. And to look at. I wish I had taken two!