Trending
You are at:Home»THEATRE»THEATRE: OKLAHOMA!
By Karen Salkin on September 23, 2022 · THEATRE

I saw this new version of the classic Rodgers and Hammerstein musical, Oklahoma!, over a week ago, and I’ve been debating running this review ever since then because I don’t enjoy being negative.

According to the reviews for the recent Broadway production, (of which this is the National Tour,) this show is “sexy,” “audacious,” “probing,” and “daring,” while according to the women in the ladies room, (and every person who has contacted me privately about it,) the positive reviews are just The Emperor’s New Clothes—no one wants to say anything bad about the show out loud lest they look like they’re missing something or not saying the right things. 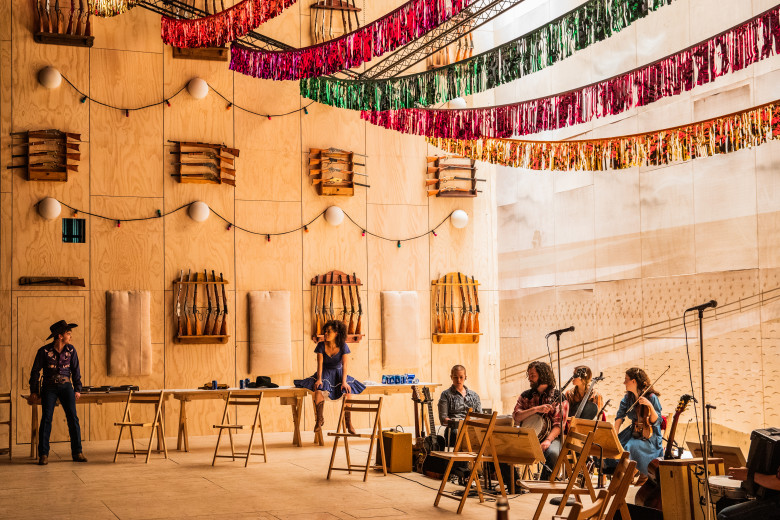 This is a side view of the stage. The lighting is hardly indicative of what it is for most of the show. Photo by Matthew Murphy and Evan Zimmerman for MurphyMade, as is the one at the top of the page.

I’ve been getting emails and messages ever since the opening, begging me to tell the truth about it. I hate hurting anyone’s feelings, (except a girl who crossed me back in my clubbing days: she asked if she looked fat, and I told her no, of course, but a few nights later, after lots of evildoing on her part, I told her in a moment of triumph, “I lied—you did look fat!”) But I can’t lie to my readers. So, even though I’d be better off making believe this version is the greatest show to ever hit a stage, (as so many others have done to look more socially correct,) I’m going to really break it all down for you right now, with the less-voiced-in-public opinions.

[Note: I think everyone knows by now how much I adore Los Angeles’ Ahmanson Theatre, so it pains me to say anything negative about one of their presentations. But this is perhaps the only bad show I’ve ever seen there, and none of it is their fault. It’s a show that received lots of rave reviews on Broadway, and the Ahmanson is giving Angelenos the opportunity to see it, which is always appreciated.]

One of the show’s tag-lines is, “This is Oklahoma! as you’ve never seen or heard it before–reimagined for the 21st-century.” I agree with that assessment, and thank goodness I haven’t seen it like this before; it’s like a cross between a high school show and an SNL skit, particularly the one where teen-agers do a revue, thinking everything they say is so profound, while the grown-ups look horrified.

In all fairness, Oklahoma! is my least favorite Rodgers and Hammerstein musical; it’s always been a goony story, the play of which was written in 1931. And, for me, it contains their least good music, with so many of the songs sounding similar, perhaps because it was their first musical together. So it didn’t bother me when I learned that this rendition is somewhat different from the original; I figured it could only get better. But I was soooo wrong in that assumption.

The original script is said to be adhered to exactly here, (except I’m pretty sure they re-wrote the method of a death,) so the changes this production made are basically to the set, casting choices, and how the material is presented. 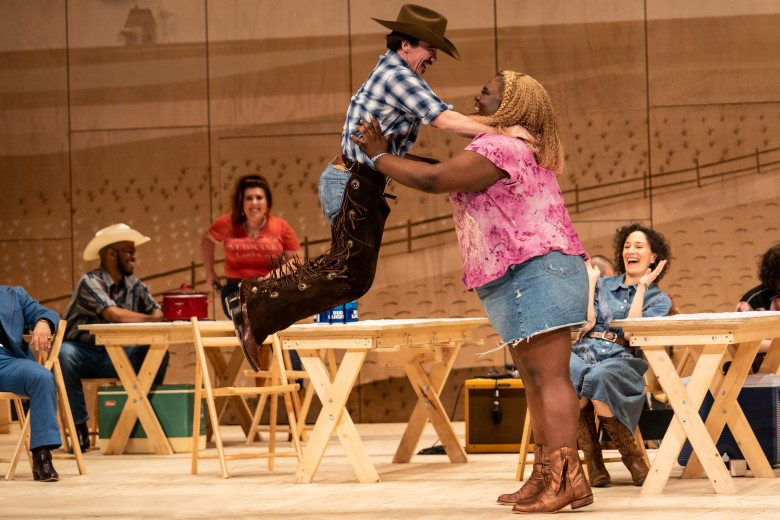 Hennessy Winkler and Sis as Will Parker and Ado Annie. Photo by Matthew Murphy and Evan Zimmerman for MurphyMade.

Before I give you specifics, let me say that just as classy ladies are taught to remove one item of jewelry before they leave the house, I re-read this review and took out many of my critiques. (Sorry to disappoint some of you; contact me privately, if you know how, for the rest.)

So let’s start with the easiest one: Just about every actor reads his or her lines stopping at every single period in the script, which is far from the way real people talk. That’s Acting 101! The show would be half as long as its almost-three-hours if they would just speak normally.

I really wanted to at least love the voices, but there is not one really special voice nor performance. On opening night, I noted that it felt more like I was watching a regional theatre company than a National Tour. (And then, just as I was writing this review, I was beckoned to another room by Hugh Jackman’s mellifluous tones as Curly, because Mr. X was watching a bit of that old production of Oklahoma! on PBS! So my feelings on the caliber of talent of this new rendition was cemented even further.)

I’ve always read that the main character, Laurey, is torn between the two men, Curly and Jud, which I’ve never understood, so I was hoping that one of the differences with this production would clear that up for me, but, alas, it did not. There’s zero chemistry amongst the three actors. Actually, there is a tiny drop between the two guys, but neither of them seems the least bit interested in the girl. 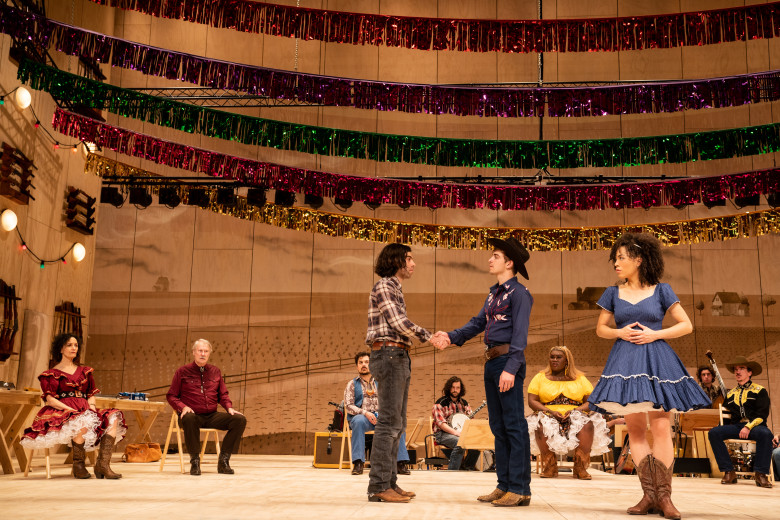 (L-R, from the center) Christopher Bannow, Sean Grandillo, and Sasha Hutchings. (The tiny house on the backdrop, on the right, is the one the smoke comes out of at one point!) Photo by Matthew Murphy and Evan Zimmerman for MurphyMade.

The set, designed by Laura Jellinek, really annoyed me. It’s all blonde picnic tables in a location that looks like a bingo hall. And the lighting, by Scott Zielinski, is waaaaaaaay too bright! I felt like I was about to be interrogated.

Speaking of the lights, they rarely turn the house lights down, except for a couple of times when the entire stage is dark. So, if you’re in a future audience, please make sure to not do anything gross for all around you to witness!

The worst thing that happens on the stage is—they waste food! That’s something I absolutely cannot abide, especially in LA with so many homeless people! And they do way too much of that here; they waste containers of milk, cans of water, and ears of corn. (It all looked real to me, and to my friend, as well. I’m hoping we got that wrong, but, sadly, I really don’t think we did. If anyone knows, for sure, please correct me in the Comments section below.)

Now, as a life-long lover of dance, I must describe in depth what upset me the most about this Oklahoma! Even though it’s just a small part of the presentation, the dreadful supposed “ballet” boiled my blood. And it’s not even ballet to begin with!

A major part of the Oklahoma!, as written, is a fifteen-minute ballet of Laurey’s dream about her feelings about her two suitors, Curly and Jud, which always closes Act I. But in this production, it opens the second act, which forces dance fans to not leave at intermission. The only good news about it is that, thankfully, it’s shorter than that quarter of an hour.

But it’s far from being a ballet—it’s an awful quasi-contemporary dance, accompanied by discordant guitar, to boot. I can say with full confidence that original Oklahoma! choreographer, Agnes DeMille, is rolling in her grave. (I know I would be!)

The deficiency is due only partly to the dancer herself—the fault lies mostly with the choreographer, John Heginbotham. I’ve rarely seen such weak choreography by a professional. And I see every dance performance possible. (If this had been an audition for So You Think You Can Dance, the comments would have been, “You’re not ready,” and “Keep working and come back next year.”) 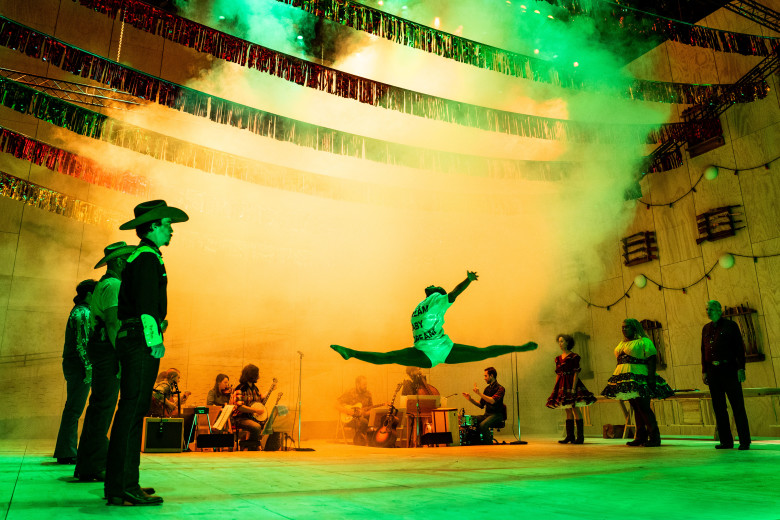 This picture makes the dance look so much better than it is. And I think it’s a different dancer, too. Photo by Matthew Murphy and Evan Zimmerman for MurphyMade.

A bit of strangeness is that in the program, this dance is listed as being performed by the “Lead Dancer,” which is weird on two fronts. One is that it’s supposed to be danced by three or four people, not just one—it’s about the love triangle! The other is that…there are no other dancers in the entire cast of twelve, so how is she the “Lead” one??? It should be credited as the “Only!”

By the way, the premise of the dance since the musical began in 1943 is ludicrous to begin with because Laurey is supposed to be scared of Jud, and not in a “he’s the bad boy, so I’m attracted to him” way. So why would she be wondering which guy to choose? It’s obviously not the threatening stranger over the cute cowboy! And what’s the emergency in picking one? The narrative takes place on just one day. There’s always tomorrow. (Wait—that’s a different show.) To warrant the usually-impressive dream ballet, the book writer, Oscar Hammerstein, has Laurey take a “potion” to nap between making her dinner basket and going to the clambake. (Or whatever that fete is. But isn’t it always a clambake with those old musicals?)

All that being said, there are a few positives for people who enjoy different theatrical experiences. So let’s explore those:

On opening night, several people around us were downright guffawing. At what, my friend and I could not figure-out, but there is that.

I always enjoy seeing musicians on stage, which they were here, in the back of the “bingo hall.”

Sasha Hutchings, who plays Laurey, looks great in all of her outfits, especially the adorable hoedown dress. Color me jealous.

The woman who plays Ado Annie has the best singing voice in the cast. (But I couldn’t make out a word she spoke.)

Christopher Bannow, who plays Jud, looks sort-of like a social-pariah version of Neil Young, which might be a good thing to some of you.

Speaking of that dark character, Pore Jud is Daid is usually the worst number in Oklahoma!, by far, but that was not the case in this production, perhaps due to it getting the 60 Minutes extreme close-up treatment. It reminded me of what kids do with flashlights to tell scary stories. (It is weird for a musical, but I had to find something to like, didn’t I?) 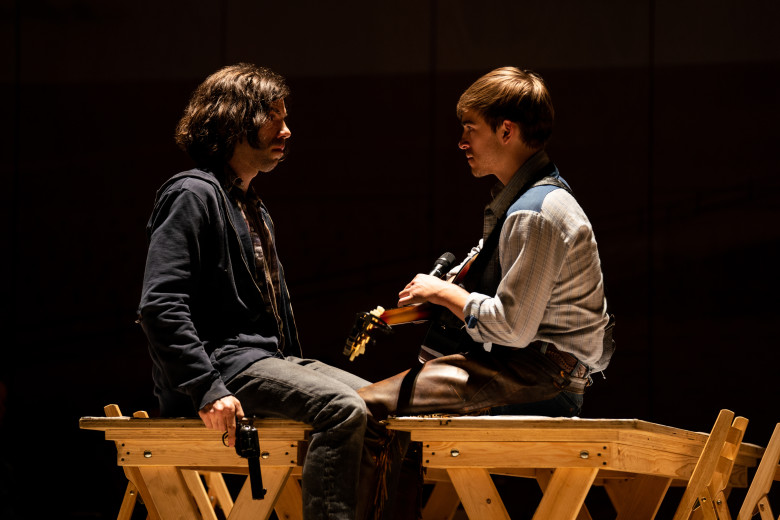 One note on the recent Broadway production of this newfangled Oklahoma! They served chili and cornbread to the audience at intermission. Smart move. Perhaps if they fed us on this coast, we would have felt more kindly toward it all. But wait–even free food could not change my opinions of this show. And that’s saying a mouthful!

Now, as promised earlier, here’s that most entertaining moment of the whole opening night. It’s when I realized that my newly-applied fake thumb nail had fallen into the toilet at intermission, and was being flushed into the abyss! I still feel bad I didn’t go after it because now it’s lonely in a landfill somewhere. But it gave my friends and me something to finally laugh about, other than the absurdity of this production.