Trending
You are at:Home»THEATRE»THEATRE: NOVEMBER
By Karen Salkin on October 9, 2012 · THEATRE

No, I’m not talking about next month, which I’m a tad trepidatious about anyway, on so many levels. This is my review of David Mamet’s political comedy that just opened at the Mark Taper Forum.

This was everything I like a play to be: humorous, well-performed, topical, and short!!! And even though it was first produced on Broadway almost five years ago, it’s oh so relevant today.

There was a laugh just about every second. Literally! It was funny line after funny line. It usually takes me several minutes to get into a show, but this one grabbed me right out of the gate! From the sound of the raucous laughter all around, it did the same for the entire assemblage. I also take notes during most shows (in the dark, unassisted by even a pen light, so no worries about rude-ness, like that of the idiots who check their emails constantly!!!) But I couldn’t do that at this one because I didn’t want to miss even one bon mot. 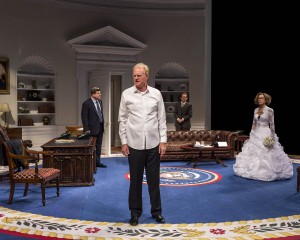 I really must laud its star, Ed Begley, Jr., who played a generic President of the United States. I had no idea he was that funny!!! I know the lines weren’t written by him, but his delivery was impeccable. Several years ago, when I was hosting a show on a new shopping network, (don’t judge—female TV hosts don’t have many options open to them,) he was a guest on my very first episode! I don’t have a clear vision of what he was hawking, but I’m pretty sure it had something to do with solar energy. I had a very creepy co-host, (who got the axe right after that premiere,) who was totally humorless. And Ed was kind-of serious himself, so bringing life to the segment was an uphill battle for me. So, imagine my surprise to find myself guffawing at Ed Begley, Jr.!!! I was so happy.

[On a side note, Mr. X told me that the very first celebrity he met when he arrived in Los Angeles as a young actor (sponsored by none other than the great Greer Garson, I must proudly add,) was Ed Begley, Sr. Had there been a post-show party for November, I’m sure he and Jr. would have had lots to talk about. Not that Mr. X would have gone to a non-dance party anyway, but I’m just saying.]

I don’t have much to criticize with this show at all. Takeshi Kata’s set was perfect; simple and very easy to work with. The main two guys besides Ed, Rod McLachlan as his Chief of Staff, and Todd Weeks as a turkey industry rep, (the bird, not the country,) did admirable jobs. And not one spoken line could have been better.

The only slight weakness was Felicity Huffman as the President’s lesbian speechwriter. (I’m not the only one who thinks so; several people leaving the sold-out theatre with me were discussing it, too. Not that I was eavesdropping; they were just speaking loudly. One commented that he “just didn’t buy” her.) Although her lackluster performance didn’t detract from the overall enjoyment of November, it just seemed like some color was missing from her. She did perform realistic sneezes, though, as her character was sick with the flu. But oddly, she seemed to drop it by what was the next morning in the script. I don’t know if that was her fault or that of the director, Scott Zigler, who did an otherwise flawless job. The pace of the show was just perfectly snappy.

I highly recommend this one to all. But I do caution easily offended peeps that the F-word is used even more than it is in my house, which is saying a lot. (One old pal, after spending an evening with Mr. X and me once, declared to us, “You guys aren’t even fighting; you’re more just cursing each other out!” And her point was?) I personally thought its usage, let loose in key spots, brought a lot of hearty laughs. But I just wanted to warn the more sensitive of you. (Obviously, nobody in the star-studded opening night audience minded because we were all just riveted to the play.)

[Note: notice it closes right before the Presidential election. I don’t know what I make of that fact; I just thought it was an interesting observation.]