Trending
You are at:Home»THEATRE»THEATRE: NEW YORK WATER
By Karen Salkin on December 1, 2017 · THEATRE

Reviewing New York Water reminded me of a really fun story, which I had told on my TV show many years ago, so I just had to share it with you all on my YouTube channel. (It’s one that’s better to be told orally than in print.) You can watch it here, but then please come back and finish reading this review, if you just can’t wait to hear the story now: www.youtube.com/watch?v=9mepZ82k8NA.

Having grown-up in New York, and then being largely bi-coastal for all of my adult life, I’ve drunk my fair share of New York tap water. But, since learning of the microscopic shrimp that live in it, I’ve had nothing to do with the liquid, for about seven years now. So, I got a tad nervous even reading the title of this new play at the Pico Playhouse. 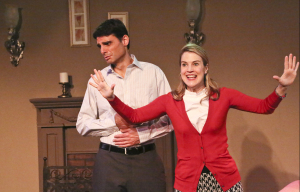 Ross Benjamin and Bridget Flanery. Photo by Michael Lamont, as is the big one at the top of this page.

But I needn’t have feared. New York Water is not about the water; this two-character play is an interesting comic journey that spans several years of a romantic (of sorts) relationship. The couple is played by Bridget Flanery and the adorable Ross Benjamin. He was the highlight of the evening for me, and not just because he’s a part of the story I tell in that new YouTube video above. His performance is charming and understated, which I always appreciate.

Here’s a sidebar on Ross: As many of you may already know, he’s the son of actors Paula Prentiss and Richard Benjamin, one of Hollywood’s most enduring love stories. He really looks like a young version of his father, but really so much better-looking. And their wonderful low-key line delivery is so similar it’s almost scary. So, it’s a pleasure to watch him work, on many levels.

I never tell you what a show is about, so that you can experience the story for yourselves, but I do have to say that, besides the duo’s relationship arc, New York Water seems to indicate that New York wins out over LA, not just in water, but in a place to be. That aspect was a tad hard for me to get on board with, even in a comedic way, because I left New York for LA, so clearly, I consider LA to be the much better place. And I’m not even a show business phony! [Note: I didn’t set-out to make the change; I just came out here for a few weeks in one of my teen-age summers and fell so in love with Los Angeles that I didn’t want to ever leave. And, after all these years, I still feel the same way!] 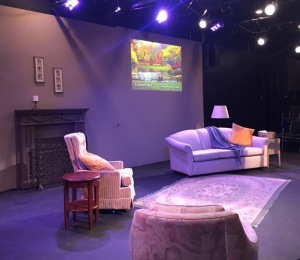 The set, with one of the projections on the wall. Photo by Karen Salkin.

There are a lot of clever lines by playwright Sam Bobrick in this play. Even with my aforementioned stated love of LA, one of my favorites is when the male character says, “After Los Angeles, nothing scares me anymore.” That’s one of the lines that got the biggest, knowing laughs the night I saw it. And after the guy asks, “What if I change?,” the female comes back with, “You’re an accountant–you’re not gifted with that ability.”

The simple set is excellent for the performance space. And, to help the somewhat lengthy between-scenes set changes along, they play upbeat music, and flash really colorful and interesting projections onto the main wall. They showed them before the show, as well, and at intermission, too, and I really appreciate the work that must have gone into finding just the perfect pix for the occasion.

There’s really not much negative to say here. If anything, it’s that Bridget overdoes her role a bit, but since there are only two people on stage, and Ross’ milquetoast character’s demeanor really needs to be restrained, maybe her bigness is warranted. But I always hate when actresses use a stance of leaning forward with their hands out behind her sides, as Bridget does for much of Act I. 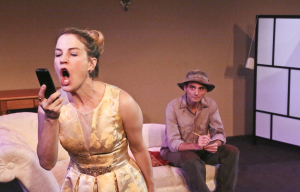 Also, I have one little bone to pick with Ross’ wardrobe. They try to make him look like a nerd, including starting him off with a bowtie, but his tall, thin frame, with model-caliber posture, is hard to geek-up. Even his pants bottoms fall perfectly over his shoes, which is something ever-fashion-conscious moi always notices in men. But those are my only two very tiny complaints with the entire production.

The venue is the theatre in West LA that was called the Pico Playhouse for more years than I even knew about it. But I guess they were seeking a hipper moniker, and now it’s simply “The Pico.” That’s probably how everyone referred to it anyway, so what the heck? I had been there only once, way back at the start of Karen’s Restaurant Revue, (because even back then, despite the title of my show, I didn’t review only restaurants.) It was a long time ago, but still I had a distinct picture in my mind of the interior of the place. So I was a tad surprised to see it now. But it wasn’t just my perception that had changed—the theatre recently had a wonderful re-model, so the configuration is new to everyone! 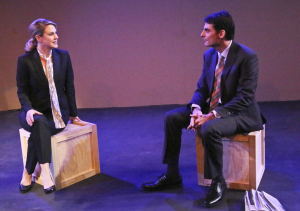 Since an evening at the theatre is rarely about solely the show you’re seeing, I’m happy to tell you that this whole night was really delightful, on so many levels, even though it wasn’t even opening night! The place was pretty packed for the night after Thanksgiving. In addition to seeing the amusing show, and chatting with several fun audience members before, at intermission, and after, I enjoyed speaking with Ross after, and meeting his super-pleasant mom and darling doctor wife. (How happy are his parents?!)

But the actual best part came at the very beginning of the evening. As I said my name to pick-up my tickets, the guy at Will Call stopped in his tracks and just stared at me. It was the Artistic Director of the theatre, (and director of this production,) Howard Teichman, with whom I had been in the Laugh Factory Ensemble many years ago; we were the resident improv group of that iconic comedy club! We had bumped into each other only once since then, so this reunion was truly amazing. It was as though we had just seen each other the week before!

I hope that you have as lovely a time when you see New York Water at The Pico. Just bring along your own bottled water, because, even in LA, you’ll never want to drink from the tap ever again!