Trending
You are at:Home»THEATRE»THEATRE: MY LIFE ON A DIET
By Karen Salkin on April 8, 2019 · THEATRE

MY LIFE ON A DIET

Bottom line to Angelenos: go see this very funny, light-hearted ninety-minute biographical comedy at The Wallis in Beverly Hills! You have only this one week to do so!

Of course, I’ve been aware of celebrity couple Renee Taylor and Joe Bologna for most of my adult life. I’ve run into them several times at events; Mr. X starred in a play they wrote; and we even went to their house once for a pasta party, after which I begged Joe to bottle his pasta sauce because it’s, by far, the best I’ve ever tasted. 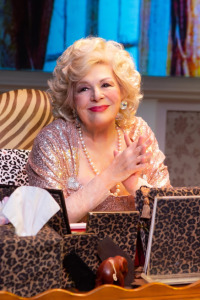 Renee Taylor. Photo by Jeremy Daniel, as is the big one at the top of the page.

But, despite all of that, I had no idea just how downright hilarious Renee is! Nor knowledge of any of her remarkable history.

So this solo show of hers, My Life on a Diet, (which was already produced off-Broadway last summer,) was a revelation to me, on so many levels.

Renee Taylor is funny, charming, and delightful. And My Life on a Diet is the latest chapter in her fascinating career. And life!

The presentation of the monologue is basically Renee sitting at a desk, reading from her 1986 memoir of the same name (which you can read for yourself, but if you have the chance, you really need to hear Renee say it!) But it does not seem like reading at all—her easy delivery is perfect! She sounds like she’s just telling her friends about parts of her life. And what fun, fabulous memories to have!

Renee actually turns even the lows of her life into entertaining anecdotes, which is a true gift.

And the hook of My Life on a Diet is, of course, all the weird diets she’s been on in her amazing eighty-six years. Duh. (But in her younger photos, she looks pretty skinny to me.)

How did I see her old photos, you might ask? Because all throughout the show, the audience is treated to tantalizing slides of those pix, along with a few old film and TV clips of Renee. Those projections, designed by Michael Redman, are some highlights of the production. I always appreciate good visual aids! 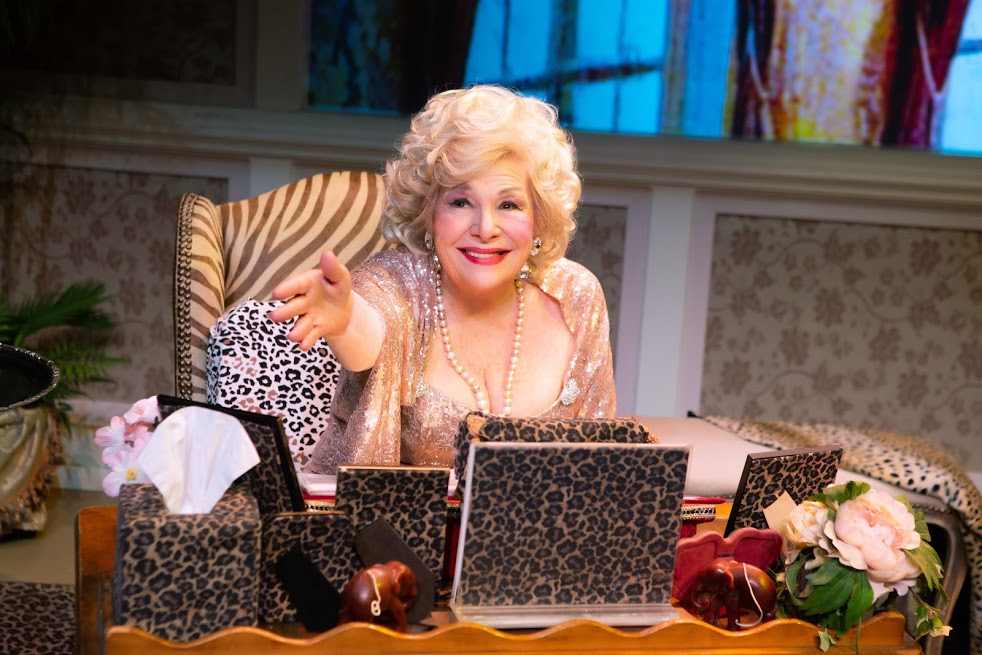 I have to be honest and tell you that I have never seen The Nanny, the sitcom Renee was an Emmy-nominated part of, (because I didn’t want my ears to bleed from Fran Drescher’s nails-on-a-chalkboard voice,) and watching this play, I realized that I had never seen Renee in anything else, either! (I actually researched her when I got home from opening night, and, really surprisingly, I haven’t seen even one of her gazillion credits! How is that even possible?) But somehow, I’ve always known who she is. That’s star power! 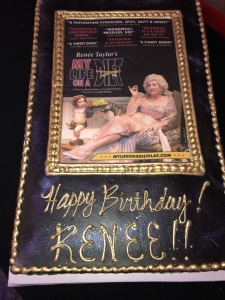 The cake (for Renee Taylor’s recent birthday) at the opening night reception. Photo by Karen Salkin.

The opening night audience, especially my friend, Marc, were guffawing at just about every sentence Renee uttered! The assemblage was filled with a potpourri of her supportive show biz pals, including Cindy Williams, Sharon Gless, Paula Prentiss and Dick Benjamin, Frances Fisher, Dyan Cannon, and my good bud, Elliott Gould, so there was a lot of knowing laughter. But I have a feeling that every fan of Renee’s (or of show business in general,) will find My Life on a Diet just as delightful as the glitterati did. That night, the laughter didn’t die down until after the heartfelt standing ovation.

Renee’s stories are fabulous. And eye-opening; you’ll be amazed at who some of her famous buddies have been, going all the way back to the ’50s! (I don’t want to spoil any of the surprises for you, but Marilyn Monroe was one of them!)

Even with all the humor, Marc pointed-out that several of Renee’s reminiscences are really touching. He freely admitted that he even teared-up on occasion.

I’m thrilled that Renee tells it all linearly because that’s how my mind works, too. So, the tale is mostly the highlights of her early life and career. That means that her beloved husband, Joe, doesn’t come into the story until much later in the show, which is especially poignant; I had always thought of them as one entity, so this is the first time that Renee stood out on her own to me. 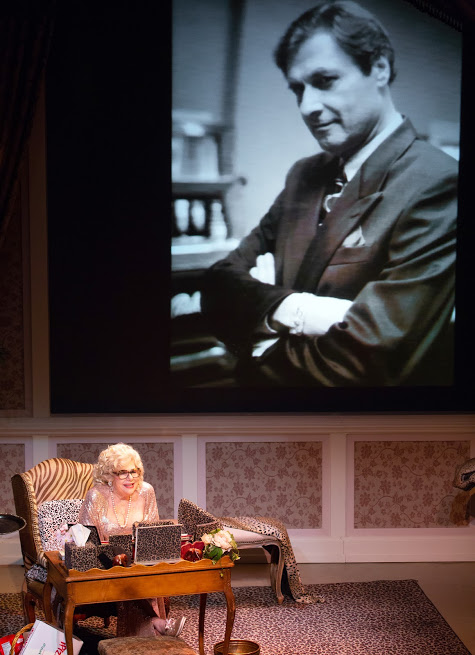 Renee Taylor, with a giant projection of her late husband, Joe Bologna. Photo by Jeremy Daniel.

That makes doing My Life on a Diet all the more courageous of her. Renee and Joe actually wrote the piece together, and Joe directed it before he left this level of life twenty months ago. I give her tons of credit for carrying on so well after she, as Mr. X so aptly put it, “lost half of her life.” So it’s uplifting to see her go on valiantly.

On a personal note, Joe and Renee’s relationship is the closest to Mr. X and mine of any others we’ve seen, in so many ways. He and I have also been together forever (despite his objections); Mr. X laughs at everything I say, as Joe told me he did with Renee; we girls are both Jewish while the guys are Italian; and we’ve each played a love interest for the other on a sitcom. And both couples got together when the girl was skinny! The main difference is the Taylor-Bologna successful writing collaboration–Mr. X and I would have killed each other working together! (And still may.) I envy them that!

And all of you will envy me for seeing this show, if you miss it. So whether or not you yourself have had to struggle through diets, or family, or careers, just do yourself a favor and go see My Life on a Diet! You will love it. (And remember to get a nosh in Beverly Hills right after—you’ll be hungry from all the food talk!)