Trending
You are at:Home»THEATRE»THEATRE: MY BIG GAY ITALIAN WEDDING
By Karen Salkin on March 13, 2019 · THEATRE

The night before I saw this crazy play, I dreamt that I was watching an entertainment in an audience of jovial people, and then here I was in that same situation at My Big Gay Italian Wedding. How prescient of me!

If you’re Italian, or love gay humor, or are from New York, this might be the show for you.

Despite My Big Gay Italian Wedding being much more like, if not a high school production then a community college one at best, the opening night audience was very appreciative of it. 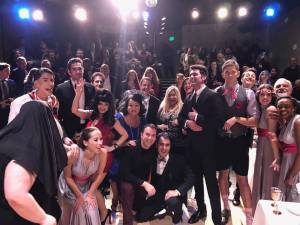 The opening night, right after the curtain call. It’s nice that they wanted to include the audience in the pic!

And that was the best part of the experience to me–seeing how far people have come in their acceptance of homosexuality. All the Italian men in the audience, (both from that actual country and Italian-Americans,) were actually guffawing in places! Let me tell you, the ones in Brooklyn I grew-up with would have walked-out in the first five minutes!!! And made their wives leave with them!

But here they were, enjoying it all. I, on the other hand, mostly did not. And that’s because almost every member of the big cast overacted so much that it was annoying. They all seemed like it was his or her first time acting, so I was shocked to read in the program that many of them have multiple credits! Some even had already done this very show elsewhere before! Go figure. 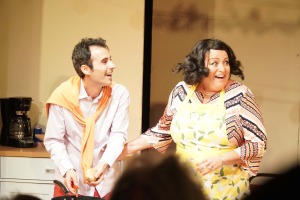 The problem might lie in the fact that several of them are actually Italian from Italy. Perhaps that over-the-top acting is the way they like it in that country, where even people on the street are dramatic. As a matter of fact, the main dude, Gianfranco Terrin, (who also directed this show, which explains a lot,) reminded me a bit of Roberto Benigni, when he exuberantly climbed over audience members to accept his Oscar in 1999.

Linda Nile, who plays the mother of one of the grooms, is the only one who seems like a real actor. She tries her best, while those around her over-act to the max. The worst offenders of that practice are the aforementioned Gianfranco, Serena Limonta as his sister, Salvador Avena as his best bud, and Kevin Clough as the wedding planner. If they took their dramatics down by half, it would still be too much. (The program says that several of them studied at the local Lee Strasberg Institute, so if you’re a serious young actor, you might want to avoid that place!) 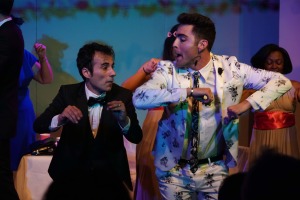 Gianfranco Terrin and David-Simon Dayan, who did not wear that awful outfit in the show! Photo by Ian Fisher.

There are two saving graces in the cast, who are both really attractive and good enough in the acting department. My fellow Brooklynite, Tomaso Diblasi, as a “Joey” type of friend, is adorable, and does not overdo—he’s just appropriately cute. And very Brooklyn-y, which most of the characters should be.

And I could possibly sit through this entire mess again just to look at David-Simon Dayan, who plays the Polish groom. OMG, is he good-looking! And his looks grew on me even more as the night wore on. Interestingly, at intermission, the actors have to wait in the same lines for the rest rooms as the audience, which is pretty poor planning for that theatre. So when I arrived in that area, the girl in front of me was grilling David about his previous work. And his heritage! And he was absolutely charming to her, answering everything. He’s the one to root for in this whole crazy tale. 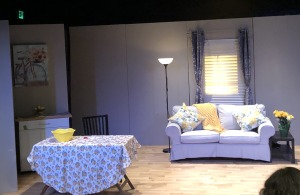 Outside of those two males, there are few positives to My Big Gay Italian Wedding, but at least there are some. The easy little set is one. They quickly turn the same configuration into different locations by simply covering the furniture with different accessories, and that works really well. And the mini-disco ball at the wedding party made even me smile!

Also, the many long Italian names that are uttered throughout the show are a riot. And so true to life.

The second act, which is solely the wedding and reception, is soooo much better than Act I, and much shorter, so don’t leave at intermission. And the audience participation in it is a lot of fun. I don’t know if we were supposed to sing along with a classic Italian song in that act, but we all did. And it felt great! 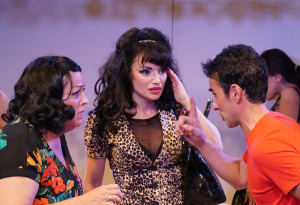 On the negative side is the major dialect dilemma. The family is a Brooklyn one; the mother and aunt have classic Brooklyn accents. But the two children have ones from the actors’ native Italy! It sounds like they just got to America! It’s not possible that kids brought-up in New York would have foreign accents, so that makes the scenario really confusing from the get-go.

And I have no idea what the father’s way of speaking is. I think he must have an accent from his native Argentina in real life, and is trying to cover it with a New York one. The director should have taken care of all this. (But since the director is also the groom with the heavy Italian accent, I guess it didn’t occur to him.) It’s all pretty jarring. And hard to ignore.

And the script by Anthony Wilkinson is very amateurish. I think my twelve-year-old pals and I wrote a better one for our class’ Christmas show…in sixth grade!

But all that being said, the opening night audience loved it. So there’s that.

If you can put aside all the accent incongruities, and the scenery-chewing, and the grammar-school-level script, I think you’ll have a lot of fun at this one. And isn’t that the goal of most theatre to begin with? Viva Italia!