Trending
You are at:Home»THEATRE»THEATRE: MIRACLE ON 34TH STREET
By Karen Salkin on December 18, 2017 · THEATRE

Mr. X and I listen to old radio shows all the time, so we were especially interested in seeing this unusual (for a Los Angeles theatre) production. I laud the creative person(s) who came up with this unique idea. 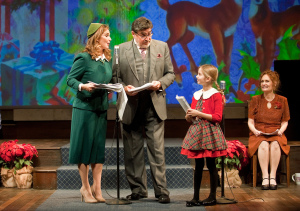 Peri Gilpin, Alfred Molina, Cecilia Witt, and Beth Grant. Photo by Nick Agro, as is the big one at the top of the page.

I always prefer to hear old mystery programs, such as Richard Diamond and Johnny Dollar, but every now and then, Mr. X foists the radio version of an old movie on me. And, even though we’ve seen the film Miracle On 34th Street about a gajillion times, (give or take a zillion,) we’ve listened to one of the radio adaptations of it several times, as well. The rest of the cast differs from the film, but extraordinary Edmund Gwenn is still Kris Kringle in it, which is what made the movie great to begin with. [Note: Not that it matters, but in case you’re curious, there were a quartet of radio broadcasts of this play, only the first of which had Natalie Wood reprising her pivotal film role. So we must hear one of the latter ones.]

So, I went into the Pasadena Playhouse rendition of this classic tale with a rare combination of excitement and skepticism. I really couldn’t imagine how they would be doing this because all the publicity about it said it’s a “live performance of the original 1940s radio broadcast,”  so I realized that we would not be seeing a regular play presentation. 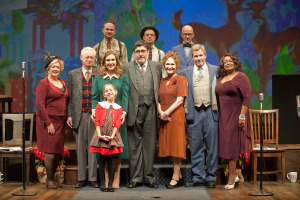 But I’m happy to report that this show is wonderful, on every level. So don’t drag your feet on this one—go see it right away because you have only this week, and then it will be gone.

It’s done as I imagine the original radio broadcast was in 1947. The actors, dressed in 1940s attire but not necessarily in character-appropriate costumes, (such as a Santa Claus suit or a judge robe,) step up to microphones, scripts in hand, and read their roles. Some of the actors play several parts, with different voices, and we get to see the sound effects guy right on-stage, which is fascinating. There’s also a piano player helping to keep it all lively.

As the story goes along, they take commercial breaks to “hawk” Lux Laundry Soap, (which I only wish was still in existence since they gave a “recipe” for “snow” to decorate your tree with! I love a good, messy science experiment!) [Note: OMG—Right after I wrote that, I did some more research on it and found-out that, not only is the Lux brand still in existence, but it’s thriving! And guess what? They still make laundry flakes!!! It may not be the original “diamonds of Lux,” but you know that I’ll be trying-out the current one! Stand by for my assessment.] 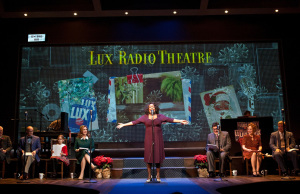 Yvette Cason in the center. Photo by Nick Agro.

There are also three song breaks, which I really don’t remember from the broadcasts we hear, but ours may be edited for 2017. Either way, these were all holiday songs, such as Chestnuts Roasting on an Open Fire, sung beautifully by Pasadena Playhouse vet, Yvette Cason, so we appreciated them nonetheless. They were really good additions to the proceedings.

And the entire time, we’re treated to charming, and often colorful, projections on the backdrop, which go along with the action in the script. For example, during the beginning of Miracle On 34th Street, which takes place during the Macy’s Thanksgiving Day Parade, there are images of the parade back then. And even though they’re stills, Mr. X swears he saw them moving. (I’m jealous because I was too busy writing my review notes to look up during those particular ones. The sacrifices I make for you guys…) 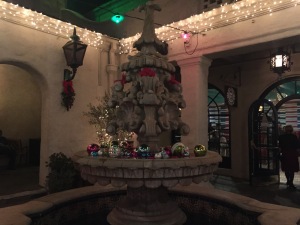 Part of the Pasadena Playhouse courtyard. Photo by Karen Salkin.

And while we’re on the visual category, the sides of the stage are dressed-up, as well. Even the Playhouse courtyard is decked-out for the holidays!

It’s all done perfectly, even if on opening night there was a little performance malfunction here and there. I actually think that added to the fun of the production.

Speaking of performances, I laud them all, even the little girl, who is not Natalie Wood, (but, really, who is?,) but she did really well. And I loved her red and green outfit, of course.

Even though these grown-up actors all have tons of credits, I had seen only two of them (Alfred Molina and Yvette Cason) work before, in person and/or on film. So it was a lovely surprise to me, all the way around. 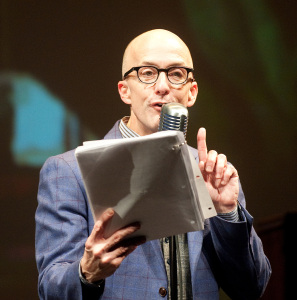 But there are three stand-outs. First and foremost, Alfred Molina as Kris Kringle is outstanding. I’ve never been a fan of his before, (I wasn’t not a fan; I just didn’t care about him one way or another,) but now you can sign me up. I was prepared to be upset that he’s not Edmund Gwenn, but Alfred is so spot-on that I loved him!!! (Mr. X did, as well.) He’s perfect for this role.

Beth Grant, playing almost all the auxiliary females in this story, is also impressive. But everyone in the opening night audience seemed to have the same favorite—Jim Rash, doing so many characters. At one point, he even had a dialogue with himself, as two different people! Everyone in the auditorium– audience members, ushers, and even his fellow actors in this play–went nuts over this talented guy. His amusing portrayals made the whole show extra entertaining.

Speaking of the mirth of the actors, because this is a “radio play,” (as opposed to a full-on stage presentation, with sets and costumes and props and entrances,) where the entire cast is on-stage the entire time, we get to see the actors enjoy each other as it goes along. When I saw the show, they were constantly cracking-up watching Jim and Beth, and the admiration in their faces while Yvette was singing was a joy to see. 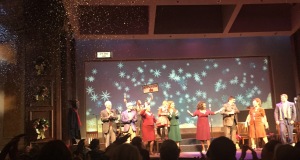 And there’s even more good news: the show is only an hour and fifteen minutes long, which is always a plus! And there are a few surprises that I’m not going to ruin for you, but they’ll all bring a smile to your face.

This is how good this show is: Mr. X, who loathes going to opening night parties, (which I have to force him to do, or else promise that there will not be one, to get him to go to a show with me,) seemed a tad disappointed that this opening didn’t have one. When I asked why, he said that this was one show that deserved to be feted!!! We both actually felt a tad bad for the ensemble that they didn’t get to accept their props from the assemblage. So, Mr. X is adding his praise of all of them to this review. And trust me on how rare that is. But we both loved the show. It’s the perfect holiday entertainment, and if you’re anywhere near SoCal this week, you have got to make time to see it!!! 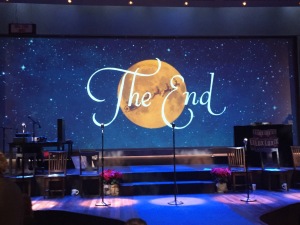 Does this one really need a caption?! Photo by Karen Salkin.

Okay, so since there was no party, and it’s a short show, which means we had more time to ourselves that night, just what did Mr. X and I do when we got home from the Playhouse? Well, first we watched yet another awful Hallmark holiday TV movie, (which is what we’re doing this season,) and then we got into bed and listened to—what else?–the original radio show of Miracle On 34th Street! And I pictured Edmund Gwenn and company doing it in the studio, now that we knew what that experience was like back then.