Who would have known that Mike Tyson is charming? Certainly not I, although I had a feeling that this show would be as entertaining as it is.

Unfortunately for the rest of you Angelenos who didn’t see it this past week-end in it’s one-week-end–only run at the Pantages Theatre, it’s too late. But for the rest of the country, the show just began a national tour, so you can pick it up elsewhere. And I’ll be very surprised if director Spike Lee doesn’t turn it into a cable special at the end of the run.

Mr. X was impressed with how honest Mike is in the monologue. But he also noted that the rowdy crowd was more like a fight crowd than a theatre audience at times, especially at the beginning. And one idiot on opening night kept shouting out in the middle. Even though what he had to say was complimentary to Mike, at one point Mike looked up and quipped, “I work alone, mother*#%*@#,” to thunderous applause. 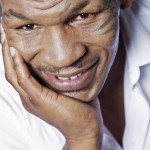 The whole production was fun, beginning with entering the theatre. Great hip-hop music played up until the show began, which put everyone in a festive mood. Then, the lights went down, and Nat King Cole’s ballad, Nature Boy, (the lyrics of which were perfect for this occasion,) accompanied the curtain rising to reveal Mike Tyson, in a suit, sitting on a tuffett of sorts, center -stage. The crown went wild.

He greeted the crowd, and then got right into his life stories, in chronological order, beginning with his birth. When he moved to his upbringing in Brooklyn, complete with video on the giant screen behind him, I perked right up, being from there myself. I love Brooklyn stories!

Along the way, he was charming, funny, and honest. And, shockingly, mostly understandable! It’s weird, but when he did impressions of people in his life, most prominently his first trainer, the late Cus D’Amato, his famous lisp disappeared! That leads me to believe that, with some speech therapy, he could lose it all together. If my father were alive, who specialized in helping people speak better, I know he could help Mike, so there has to be somebody around today who can do it for him now. He should really look into it. I’ll offer my services free-of-charge, if he wants to get started. That’s how much I hate lisps.

The show was great. Not only was Mike basically entertaining during the stories, he had accompanying movement at times, did the aforementioned impressions, had those great visual aids, and there was even a brief sing-along! Undisputed Truth had it all!

My only disappointment was that, since he covered everything from his childhood to the 2009 death of one of his small children to his current marraige, (his wife Kiki wrote the show,) including the rape charges and multiple jail stints, I was a bit surprised he didn’t tell us of that group of mentally-challenged young adults who supported him early on. That’s actually my first recollection of him, when I was in his corner for that very reason! I had been really looking forward to hearing about that part of his life, to no avail. Shame.

And I feel that the end of the show needs to be re-worked a bit. Mike ran out of steam for the last half hour or so. He talked mainly to the people in the front row, leaving-out 99.9% of the audience. And his voice got too low. The whole thing sort-of petered-out, rather than ending with a bang. The show is said to be an hour and a half, with no intermission, but we timed it and it’s more like an hour and forty-five minutes. That tells me that it should really be two acts, both for the sake of the audience and Mr. Tyson, who would have benefitted from the break. And there were several appropriate places for an intermission. No one would have left the theatre, and it would give everyone a chance to mingle and say how much they’re loving the show.

On a shallow note, you all have to notice Mike Tyson’s feet—they’re gigantic! Even bigger than those of most basketball players. They’ve got to be seen to be believed, and are worth the price of admission right there!

Speaking of “feet,” this latest “feat” of Mike’s is perhaps his most impressive. If you get the chance to see it, you must; I promise that, no matter what you’ve ever thought of Mike Tyson, you won’t be disappointed. And you will be enlightened.