Trending
You are at:Home»THEATRE»THEATRE: LOVE ACTUALLY LIVE
By Karen Salkin on December 20, 2019 · THEATRE

This musical at the Wallis in Beverly Hills is one of the few shows in my life that I was happy to pay a repeat visit to.  As a matter of fact, this is the third time I’ve seen Love Actually Live! (Twice in 2018 and now once this year, though that number may grow if we have any more time before the run ends.) 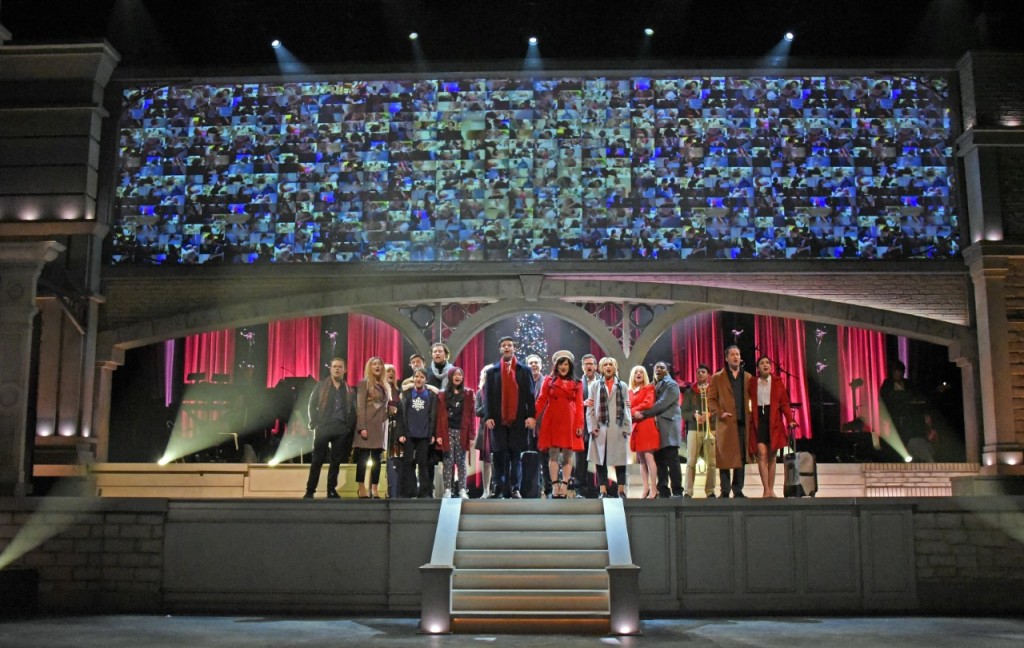 Photo by Kevin Parry, as is the one at the top of this page.

Mr. X kept repeating, “This is the best show ever!” He actually asserted that at intermission and continued saying it…all the way home! And then into the next day. (I was getting a little jealous; he never raved about my former TV show like that, which he actually forced me to do to begin with! But oh well.)

Love Actually Live is not a “musical” in the normal sense—it’s so much more special than that. Mr. X said, “You really can’t describe how good and well-constructed it is,” but I’m going to try. What happens is that scenes from the 2003 British Christmas film, Love Actually, are shown on several giant screens on and above the stage, and live actors sing songs from the soundtrack, (so the numbers are all pretty familiar,) backed by fabulous musicians. The actors don’t do any of the dialogue; all of that is right there in the uber-charming film, which is always a pleasure to see, (except for the few painful parts, which I just try to ignore at this point in my life. There’s too much sadness in the real world.)

But the live performers do act. They portray the characters in the film, with their actions and songs. You just have to see it for yourselves—I’m giving myself a mental hernia trying to explain it! 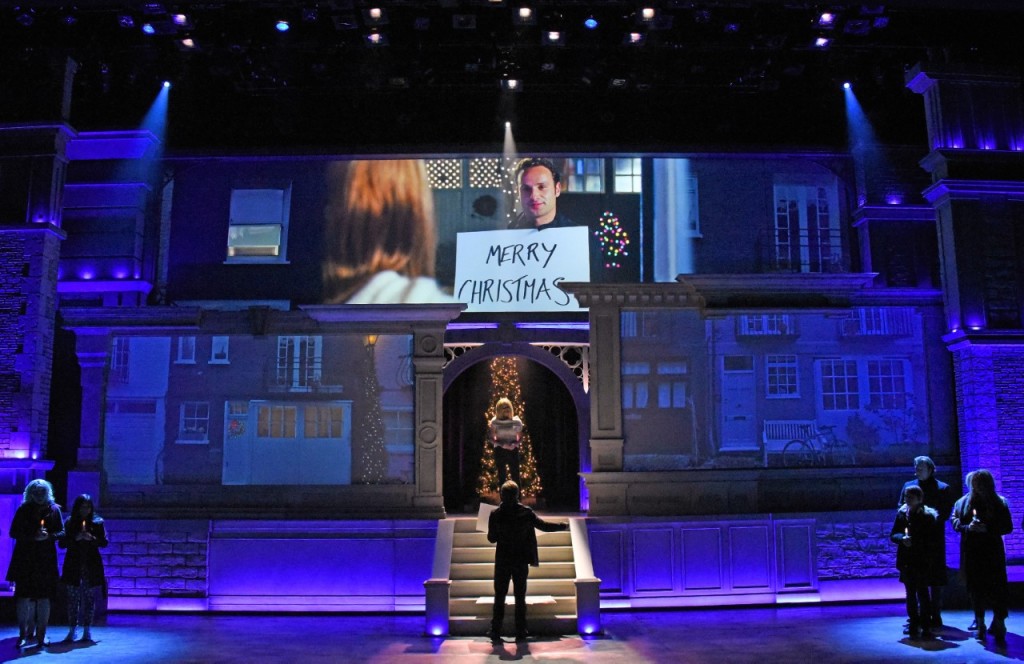 Mr. X was on a roll with the compliments that night, so here are just a few more of them: “It’s just beautiful and relentlessly delightful.” “It goes seamlessly between live action and film.” “The electricity of the live music constantly morphing into the film cuts pulls you into the story.” “It never lets you down.” “The technical aspects are excellent and creative.” (I agree, except for the occasional shocking lights flashing in the audience’s eyes; those are not necessary. Nor appreciated!) I’m with him on all of those declarations, especially, “It’s the classic Christmas show.”

Gee—I guess I should have asked him to write the entire review for me! I can’t do any better than those observations! But I have some to add. 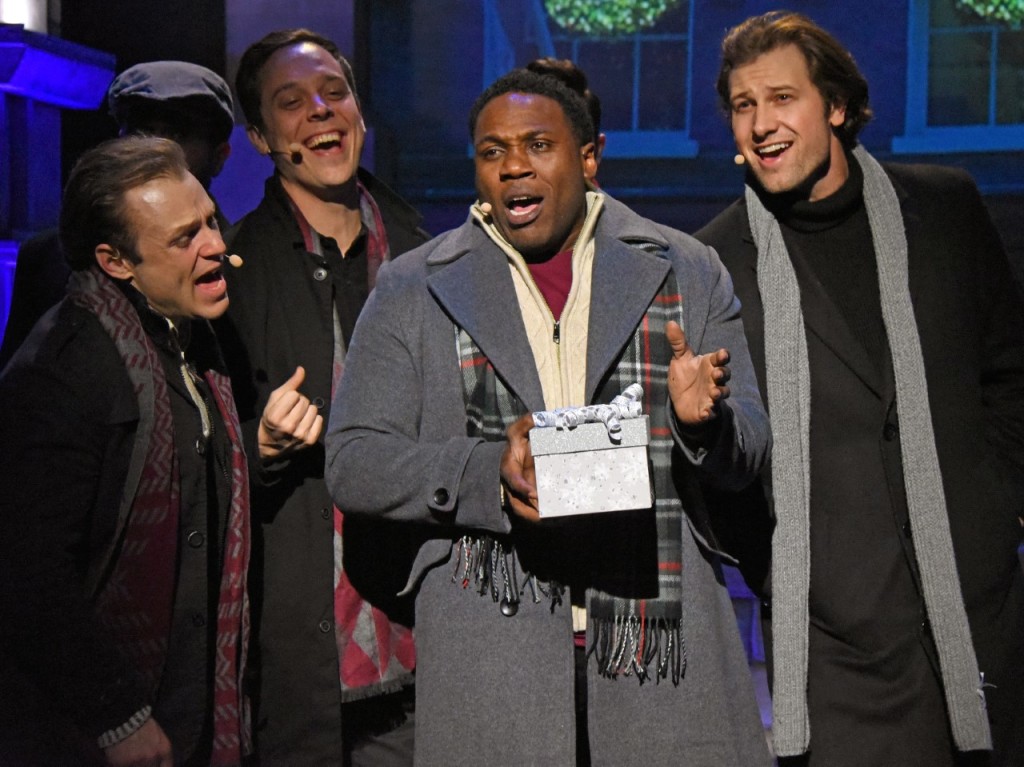 We were both very impressed with absolutely all of the singing. Of course, Mr. X observed, “They all have great voices.” But Rogelio Douglas, Jr.’s rendition of White Christmas was hands-down my fave. He could have dropped the mike after it, and I would have gone home a happy girl.

But I’m glad he didn’t because we were treated to so much more, both in the categories of emotion and fun.

And it all ends with a very entertaining sing-along, featuring Rex Smith in a gold Speedo! How could anyone not want to see that?!

The curtain call of Love Actually Live, with a mostly-naked Rex Smith in the center. Photo by Kevin Parry.

Here’s one auxiliary note of interest for first-timers to Love Actually Live: When you see the show, you may notice that Mariah Carey’s holiday mega-hit, All I Want For Christmas Is You, is missing. No one (except for the powers-that-be, I’m sure) seems to really know why, (and trust me—I researched the topic for hours,) but we all assume that the producers could not get the rights to it. (Or maybe someone associated with the production is not a Mariah fan. Who knows.) That omission really bothered me last year, when I had waited the entire two-and-a-half hours for it, but now that I knew it wasn’t going to happen, I was fine. So I’m giving you the heads-up, too. (By the way—that long-sounding time just flies! I didn’t look at my watch even once, not even at intermission!) 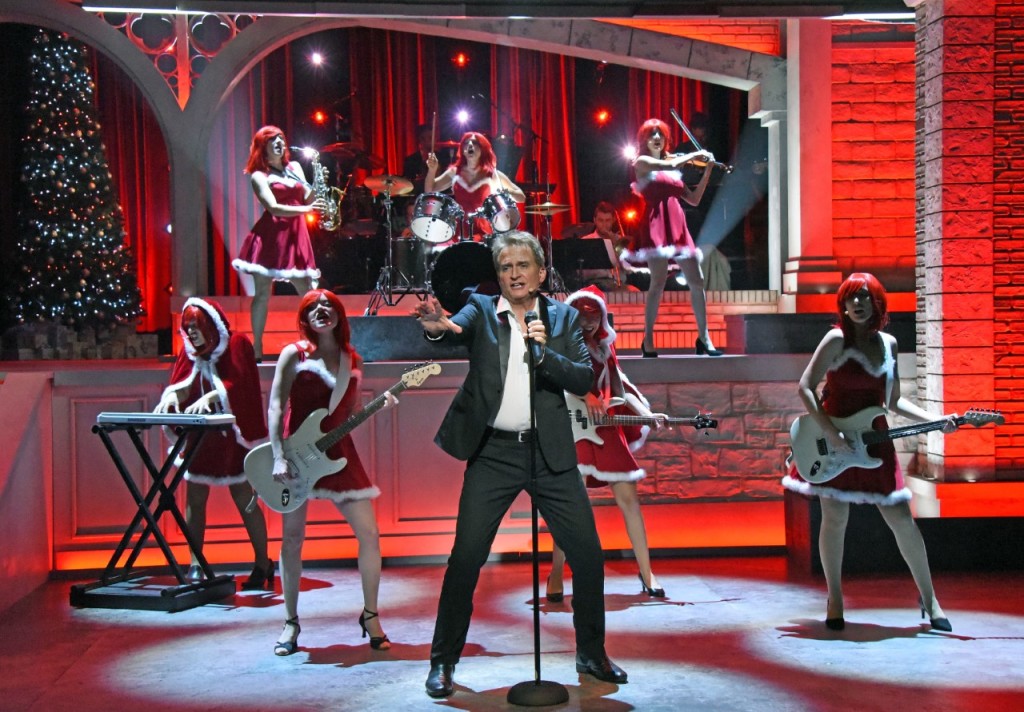 And here’s a sidebar: On the way to the theatre, we were listening to Christmas music on the radio when Joni Mitchell’s River came on. I checked to see what station was on because, in my mind, that is definitely not a Christmas song. Mr. X and I could not figure out why they were playing it. And then, watching the show, there it was, smack dab in the middle of the first act. (And again in Act II, when they needed to bring the room down a bit again.) So now Mr. X is convinced that River is, indeed, a holiday tune, especially because the first line is, “It’s coming on Christmas, they’re cutting down trees.” I still do not agree, but please feel free to weigh in yourself in the Comments section below.

As for the venue itself, I cannot imagine a more perfect one for this production than The Wallis. Every seat is comfortable and provides a perfect sideline. The visuals on this show are just spectacular, and with actors coming and going to and from different areas of the orchestra, you just always feel a part of the action. I don’t think it would be as perfect an experience anywhere else. 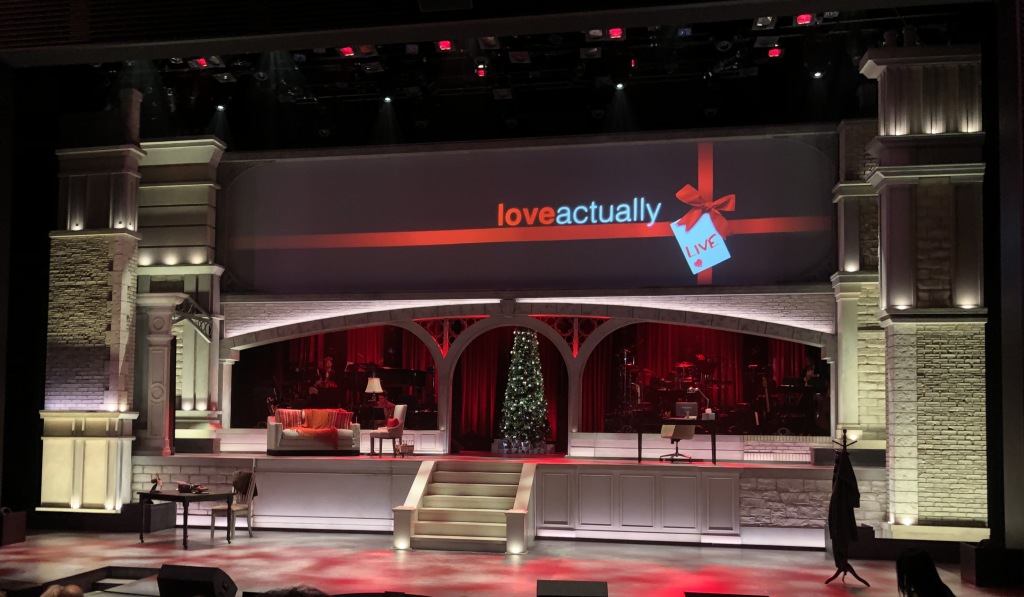 The beautiful view as you take your seat at The Wallis. Photo by Karen Salkin.

So my suggestion is–go see Love Actually Live for the holiday! (If you can even get tickets. It looked sold-out for the performance we saw, on what my mother would refer to as “a plain little Tuesday night.”)

I’m begging the Wallis to do it all again next year—I know it will once again be the only show Mr. X comes with me to willingly! So Happy Holidays to me!