Trending
You are at:Home»THEATRE»THEATRE: LITTLE SHOP OF HORRORS
By Karen Salkin on August 31, 2012 · THEATRE

So, Labor Day week-end is finally here, and we get a chance to relax. Or have some fun. Or both. But what to do? If you’re staying in town, which I always think is a good idea, you can always go see Little Shop of Horrors at the Glendale Centre Theatre for some easy-going entertainment.

I’ll spare you the sad details of how long it took me to get to see this colorful show because of unreliable pals. But I’m glad I finally got there because I’d been singing the songs from it constantly for at least two weeks beforehand! And trust me, I wanted to hear them sung by people who have better voices than I (which actually, is just about anyone!)

For those of you who’ve never seen this stage musical, nor the movie, nor the original non-musical film that’s become a cult classic, it’s basically a light dark comedy. (That description sounds oxymoronic, but I think you understand.) The story itself is kind-of dumb, but it makes for lots of laughs. And, as long as you don’t care about a show having a real ending, (which is not the fault of this production, but of the way it was written,) you’re good. 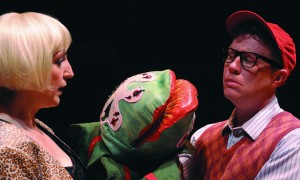 Since it’s about a human-eating plant to begin with, (wrapped inside a love story,) I say just forget about the actual story anyway. Go for the music and the comedy. And to see how this wonderful theatre-in-the-square pulls off yet another otherwise-complicated production flawlessly! To me, even better than the actual shows is their always-clever staging.

They gave this show all the color that it deserved, from the sets to the props (especially how they did the could-have-been-tricky-in-that-space plant!,) to the costumes to the performances. On that last subject, it was a little hard for me to judge what the actors did as opposed to what was written in the script; it was all a little over-the-top for me, but I believe that’s how those characters were drawn. And the sold-out audience loved the campiness of the portrayals. There was constant laughter.

The first act flew by; the second half seemed somewhat longer, but that might have been because I was trying to remember how it all ended. But it was excellent time spent in a theatre.

My pal, Flo, hadn’t been to the Glendale Centre Theatre since way back in the day. She’s seen almost as much theatre in her life as I have, (and that’s saying something,) and she was totally impressed with the whole experience, including spending at least ten minutes perusing the books on the shelves on the lovely second floor. (That’s where the restrooms are.) After the show, she sent me this email, “Thanks for the show tonight. I’m still humming the tunes!  Lovely theater.   I think they did a wonderful job on the plant, and I loved the show overall.  Nice to rediscover that theatre.”

First of all, I was thrilled that I know someone who actually thinks to say thank you! That’s, shamefully, a rarity these days. Secondly, I’m glad she reminded me to tell you about the music! I had seen the show only once before, way back in the day, and two of the songs have stood out for me since then; the title one and Suddenly Seymour. I could have just heard hour-long versions of each one of those and been happy. Poor Mr. X—he’ll have to listen to my non-dulcet tones belt those tunes out for the next month or so!

But, lucky you don’t have to suffer the same fate; you can just hop over to Glendale and hear the pros do them!

No matter what you do, have a safe and fun Labor Day Week-end!