Trending
You are at:Home»THEATRE»THEATRE: LITTLE SHOP OF HORRORS
By Karen Salkin on October 2, 2019 · THEATRE

For those of you who’ve never seen this stage musical, nor the movie, nor the original non-musical film that has become a cult classic, Little Shop of Horrors is basically a black comedy.  But a mostly non-painful one. The story itself is kind-of dumb, but it makes for lots of laughs. And, as long as you don’t care about a story having a real ending, (which is not the fault of this production, but of the way most of the versions are written,) you’ll be good. 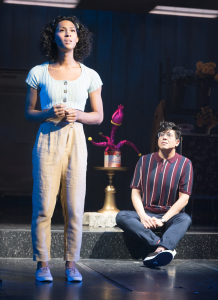 Mj Rodriguez and George Salazar. Photo by Jenny Graham, as is the one at the top of this page.

Since it’s about a human-eating plant to begin with, (wrapped inside a love story,) I say just forget about the actual plot, anyway. Go for the music and the comedy.

And in this case at the Pasadena Playhouse, also enjoy the interesting casting, which people in this town seem to be appreciating.

On opening night, Danny Feldman, the Producing Artistic Director of Pasadena Playhouse, made a good short announcement (in an admirably understandable voice, to boot,) about this rendition of the classic musical being created just for this venue. It’s not a touring company nor headed to Broadway; you will see it only here for the next few weeks, which makes it that much more special.

I grew-up with basically no prejudices, (so therefore I often don’t notice differences in people,) so I had to be made aware of the fact that what differentiates this production from the rest is that it features several members of the LGBTQ community and also several people of color, which is not how Little Shop is usually presented, even though, in my opinion, this is one show that has always had the potential for diversity.

And, since I’m a supporter of all communities, (outside of Hare Krishna, scientologists, child actors, white supremacists, and, of course, Trump idiots!,) I don’t need (or even want) to know about an actor’s personal life, or sexual preferences or leanings, to judge what they’re doing to entertain me. I know that much has been made of the fact that Mj Rodriguez, who plays Audrey, is a transgender woman. To me, if someone says she’s a girl, she’s a girl. It’s not my business; I just want everyone to be happy. So I just say, “You go, girl!” 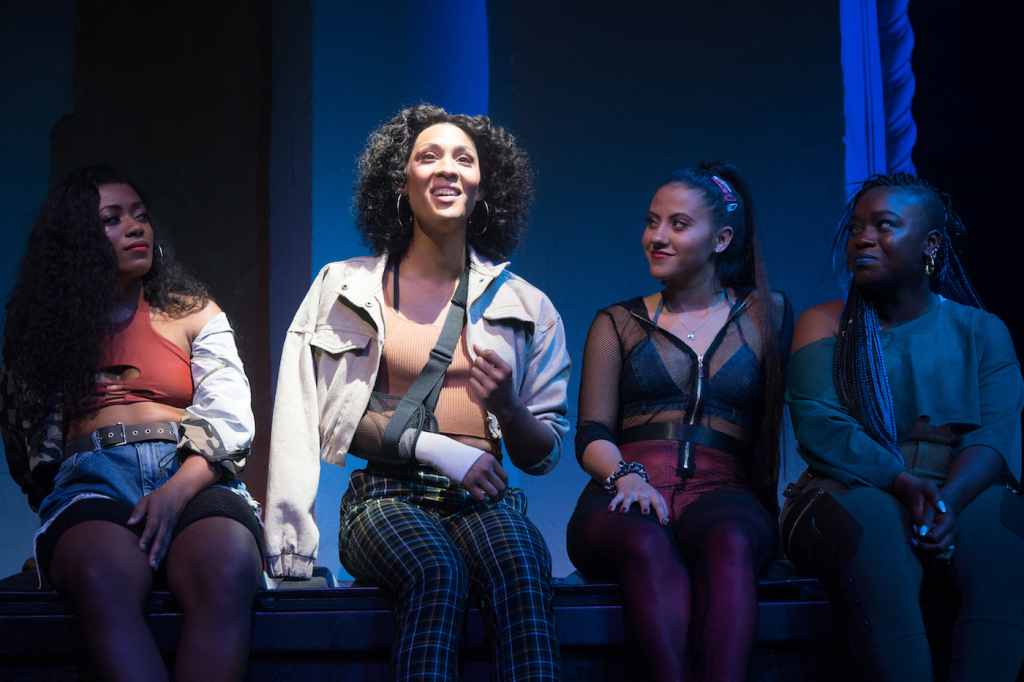 I’ve also heard somewhat of a fuss about the casting of two gay guys here in straight male roles. But don’t we see that all the time?! How many Broadway leading men and dancers are openly gay? It doesn’t matter. At all. Actually, I dare you to name a Broadway musical with no gay guys in it! So, to me, it’s just a big non-issue. (And Jonathan Groff is playing Seymour on Broadway right now, which backs-up my point.)

So I’m judging each plus and minus of this production on its own merit.

And most of it is wonderful. It’s the same story and music it always has been, so what’s not to like?

This is the classic off-Broadway musical, Little Shop of Horrors, for goodness sake, so it has those iconic numbers by Alan Menken and Howard Ashman. I’ve been hearing Suddenly Seymour in my head all week!!! 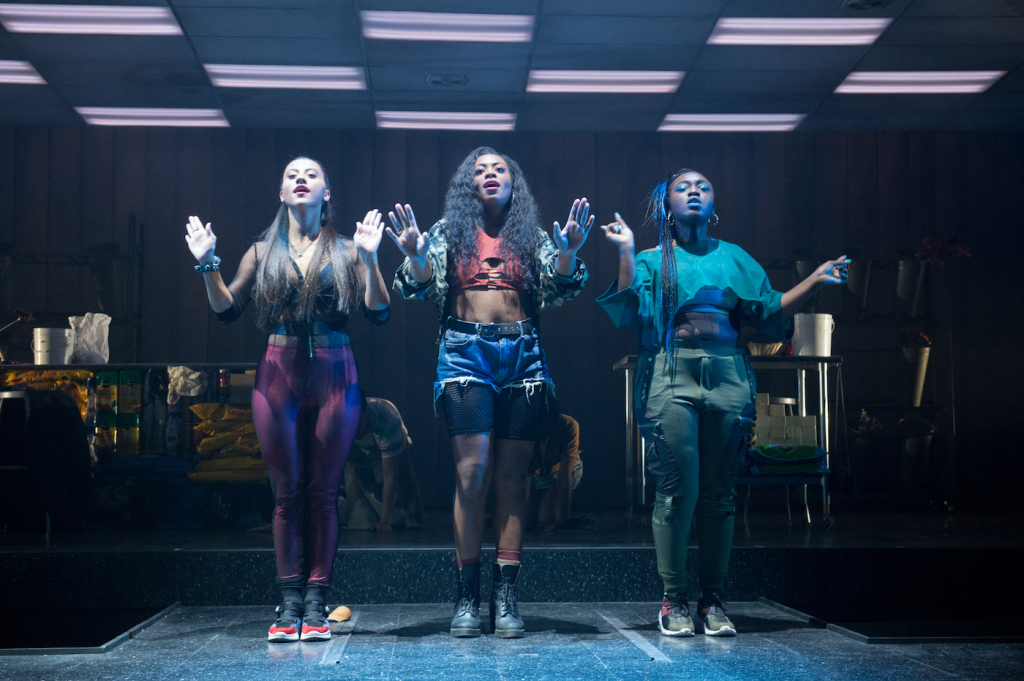 In the vocals category, I was especially impressed with George Salazar, who plays the pivotal role of Seymour here, and was the hit of the recent Broadway season in the cult sensation, Be More Chill. He sings beautifully! And the trio who make up the Motown-esque chorus, (Brittany Campbell, Tickwanya Jones, and Cheyenne Isabel Wells,) have phenomenal voices! OMG! They could really be a girl group going forward.

My favorite performer, though, was Matthew Wilkas, who plays all the fun parts including the sadistic dentist. He’s hilarious. Every time he even began walking into a scene, the entire audience I saw it with perked-up. I can’t imagine anyone being better than he is. 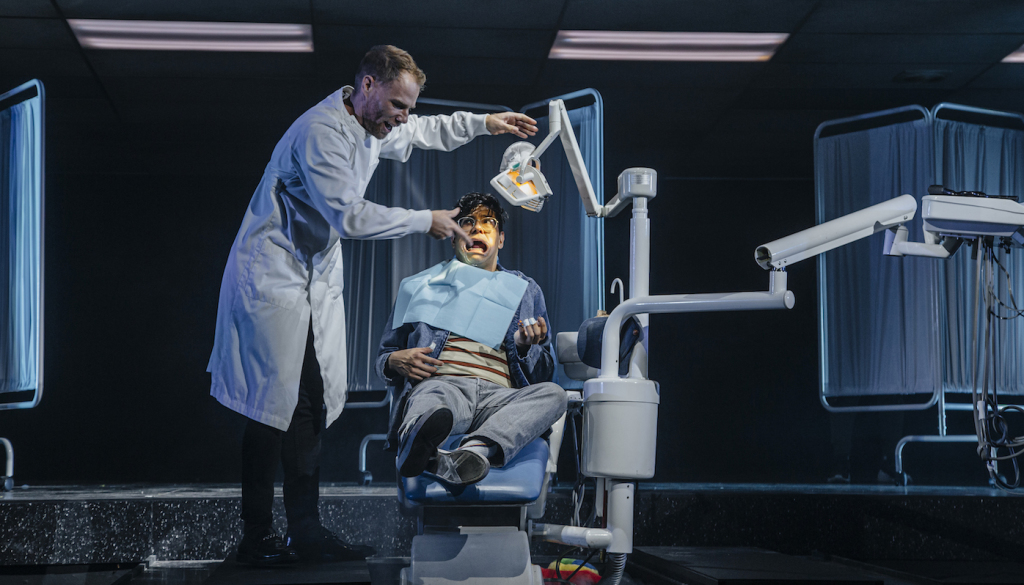 The set by Dane Laffrey is simple and kind-of easy-going; we know exactly what’s happening at all times with a modicum of movement of the pieces. And I really admire how the ceiling of the plant store is depicted. It’s just perfect!

And here was an opening night surprise–the audience was actually a big plus this time! That’s pretty surprising for the usually-pretty-staid Playhouse assemblage. Everyone was upbeat and colorful and supportive of everything that was happening on the stage. It had kind-of a college event atmosphere, with everyone being so enthusiastic. 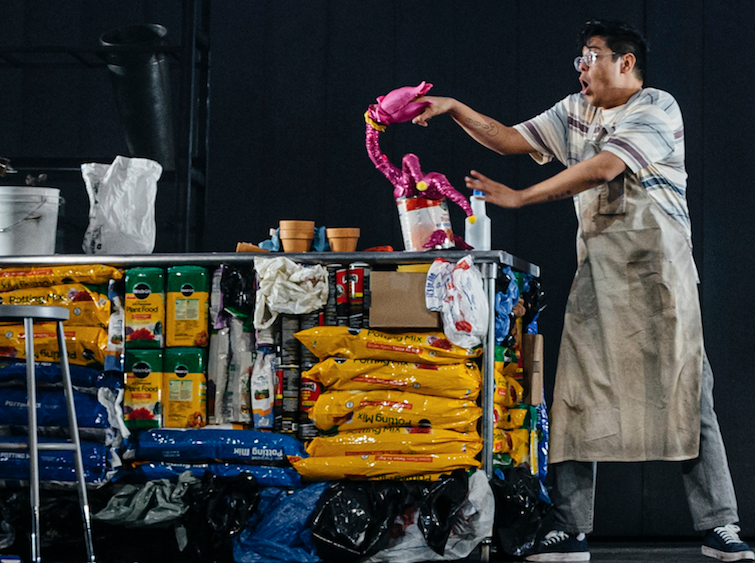 But the one aspect of this production that absolutely had me stymied is that…the plant at the center of the tale never grew! That’s usually one of the high points of any version of this show! But this one depicts the plant “problems” (I don’t want to give it away in case you’re the one person who doesn’t know the whole story) with some weird sort-of puppet work, which is pretty weak. How can they not have the plant grow? That’s the hallmark of Little Shop!!! A friend and I both said that we’ve always seen it done the right way even in smaller, much less reputable theatres, including a regional one in a suburb of Montreal! That was somewhat of a mistake on the part of whoever made that decision.

And lastly, the wardrobe on everyone is absolutely hideous! Yes, I know the show takes place in the ’60s, but these particular choices are just awful. I’ll leave it at that.

Despite those two little hiccups, Little Shop of Horrors is really fun, with music that is just fabulous, so all my SoCal readers should see it while you have the opportunity. And you never know–someone special just might turn-up on the night that you’re there, just as they did when I saw it. 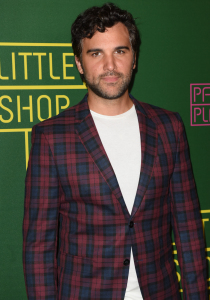 Juan Pablo di Pace. How gorgeous is this guy?! Photo by Nick Agro.

Actually, many people in the LGBTQ community, including some of Mj Rodriquez’s Pose co-stars, came out in force to support her. The opening night reception was so juicy that I eschewed the food to just mingle instead! (So that should tell you something.)

Handsome actor  B.D. Wong and I discussed the next presentation at the Playhouse, which he’s directing; adorable Vincent Rodriquez III and I agreed how strange it was of the recent Emmys to not include his show, Crazy Ex-Girlfriend, in their “series that have just ended” tribute; and the gorgeous Latin multi-talented Juan Pablo di Pace and I discussed how awful Dancing With The Stars was last year to have allowed that creep Billy Bones to win, when it should have been Juan Pablo himself! (Those are my words, not his.) 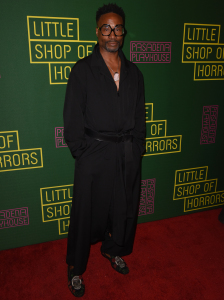 But the most amazing thing that happened that night is that I got to tell Belle of the Ball right now, recent Emmy winner Billy Porter, that the best thing I’ve ever seen in my life was him singing Everything’s Coming Up Roses in a commercial break of this year’s Tonys! I had wanted to share that revelation with him since I noticed him entering the building three hours prior, but then when I spied him again at the after-party, I was talking with Juan Pablo and wasn’t going to abort that convo. So I left the fete a tad disappointed. But as my friend and I were walking to the car, lo and behold, there was Billy with just a small group of friends, who said hi to us as we were passing by! So I got to share my affection with them all, and they all were as nice as could be. As I left, they were even still laughing over the fact that I referred to intermission as “halftime.”

This was truly the most fun opening all year! So I thank the Pasadena Playhouse for having the courage to try something so hip and modern. I think it will be appreciated by most people who enjoy being entertained.