Trending
You are at:Home»THEATRE»THEATRE: LEVI, THE MUSICAL
By Karen Salkin on November 20, 2017 · THEATRE

When I found-out that a musical about Levi Strauss that was written a long time ago by one of my favorite people, Richard Sherman, was finally being produced, I canceled all my other plans and threw on my one jeans jacket (which is a Levi’s, of course!,) and ran right over to see it. 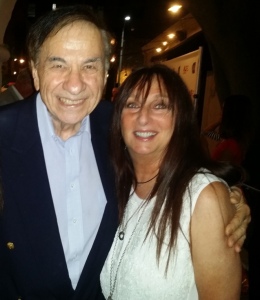 Richard Sherman and Karen Salkin at a previous event in 2016.

I was rewarded for my efforts with a beautiful, entertaining, high-quality show. I was proud to be a member of one of the most appreciative audiences I’ve ever been in, witnessing a World Premiere of a musical by an incredibly illustrious production team, in a very comfortable venue I knew nothing about until I was there that night! So, this show is a win-win-win. (But please do not sleep on Levi, The Musical because I believe that it’s running for just a few performances only!)

I’ve known Richard Sherman for over half my life now, and you would never know that this humble man is one of the most prolific composers in the world! In all the years I’ve known him, he’s never bragged, “And then I wrote…,” even though he’s one of the few people who really has that right, with compositions like It’s A Small World, and everything from Mary Poppins and The Jungle Book, under his belt. Whenever any of my friends have met him through the years, no matter his or her age, they beam from the encounter. So I feel privileged to know him, and am happy to support any projects of his. (And I love that he and his wife Elizabeth and I were the only three people fun enough to wear Levi’s attire to opening night! I love thinking like a genius!) 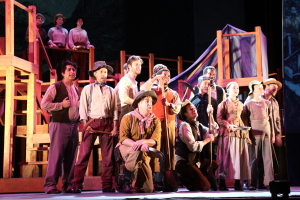 Photo by Carrie Frances, as is the big one at the top of the page.

Levi, The Musical has an interesting background. I was told that it was written in the 1980s, but was never produced. It didn’t even have a reading back then! It’s such a delightful show that I’m glad that director Bruce Kimmel found it and has now produced it at his Alma Mater, Los Angeles City College, whose theatre is the perfect spot for it.

Richard and his brother, Robert, wrote the music and lyrics, and Larry Cohen wrote the book of this musical, with additional new material being contributed by his wife, Janelle. When I later researched Larry, I discovered that he’s as prolific a screenwriter/director as the Sherman Brothers are composers! But it appears that his main genre is horror, so I’m especially impressed that he could write such a heartwarming and witty script as Levi is!

So, let’s get to my thoughts on the actual production. I loved it! It’s adorable. I didn’t check the time even once during the opening night performance, which is the sign of a really good show! I can’t remember the last time that happened for me.

The songs, with so many clever lyrics, are all very Sherman-esque, which is a big compliment! My two favorite numbers are the charming love duet, We Know Why, and the comedic Like a Man, which is adorable. (The latter is performed by all students, by the way, which makes it even more impressive.) 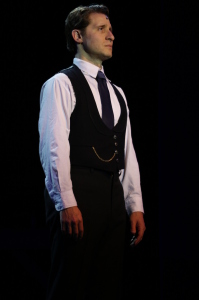 Marc Ginsberg, as Levi Strauss, (who is on stage almost the entire time!,) is the perfect lead for this show. He has a really beautiful voice–I can see why he has worked so much in his career. His theatre credits are massive!

The rest of this very big cast are students, so I’m not going to critique their performances much, except to say that I knew right away that they were students (as opposed to professionals,) no matter how hard they tried. That none of them can really sing became more and more obvious every time we heard Marc’s dazzling voice.

But even though the students may not sing well, every single one of them had presence, with absolutely no signs of nerves on opening night, especially on the parts of Rachel Frost and Prisca Kim, who each have an important solo, and also Tristen Kim, in a major role. I was impressed with all of that.

And the group singing sounded great. I’m sure that they all learned a lot doing this, and as a former teacher and mentor to a lot of younger people, I’m thrilled for all of these college students that they’re getting to have this wonderful experience.

Levi, The Musical features a simple yet clever set, which fits the bill perfectly. The musicians are on stage, in the background, the whole time, but I barely even noticed them, which is a good thing; anyone who wants to watch them for a bit is able to, but they don’t take attention away from the action. 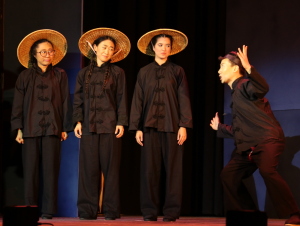 There are several projections along the way, which are the perfect touch; they’re nice and simple, and appropriately black-and-white, and portray exactly what they need to to make the timeline apparent to the audience. I love that, because I’m often confused about that part of theatrical presentations.

Levi, The Musical has a little bit of everything in it, including a historical Asian conflict and lessons on old-school anti-Semitism. I can’t believe that I never knew that the inventor of jeans was of my ethnic persuasion! I’ll wear my Levi’s with a little more pep in my step from now on!

In general, I love learning about real-life historical figures any way I can, but gaining that knowledge through a fun musical is better than anything. So, of course I enjoyed that aspect of this show, too. 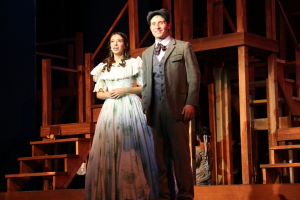 As with most entertainment versions of true stories, my post-show research showed me that a lot of Levi Strauss’ story that was portrayed on the stage was not exactly what really happened, but I know that stories often have to be re-worked for theatrical purposes. In this case, because I was enjoying it so much, I just went along with it, and I suggest that you do the same, if you’re lucky enough to see Levi, The Musical in it’s uber-limited run here.

Here’s one little personal story that this show brought to mind: As I was sitting there thinking that Marc Ginsberg’s voice is so masterful that perhaps he should have sung all the parts, I remembered that that scenario almost happened to me once, but with acting, not singing. I had to play a scene with Patti Lupone in a television show, and she was so intimidating that I downright forgot how to say “Chinese food.” Can you imagine? So, she loudly announced to the assemblage, “Why don’t I just play both parts?!” I was so mortified that I could barely finish the rest of my scenes that day. But no worries—I got back at her. At a party she threw for the show a few weeks later, a friendly game of Musical Chairs got down to—you guessed it—just the two of us! Mr. X begged me to throw it, (since he had to work with her, too,) but I guess I should have played both of the parts in this game, because…of course I won!!! That showed her! (Yeah, right.)

Here’s my last thought on Levi, The Musical: If you’re anywhere near Southern California during this show’s brief run, do not miss this chance to see a Sherman Brothers premiere.  You never know—Richard may even be there! And there’s complimentary parking, to boot!