Trending
You are at:Home»THEATRE»THEATRE: JANE AUSTEN UNSCRIPTED
By Karen Salkin on April 20, 2022 · THEATRE

What an enchanting afternoon my friend Laura and I just had at the Garry Marshall Theatre in Burbank. And you can, too, every Saturday and Sunday through Mother’s Day, (an occasion this event is tailor-made for!) Jane Austen Unscripted is the perfect spring entertainment! 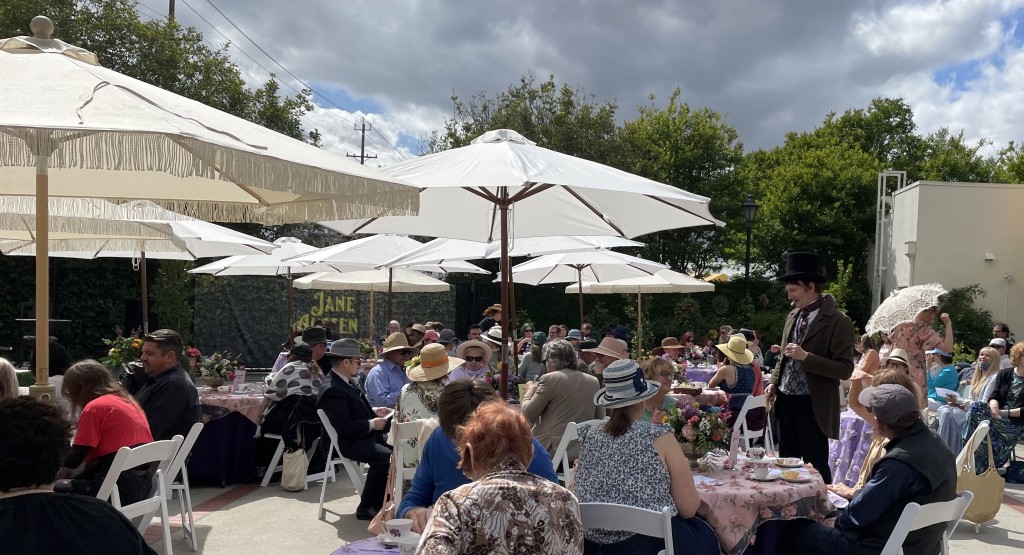 As many of you know by now, the thing I adore more than anything, (outside of Mr. X, of course,) is Afternoon Tea.  So when I was invited to see Jane Austen Unscripted, which is subtitled “An Afternoon of Improv & English Tea in Our Garden,” I jokingly told my host that I’d be happy to attend if they were actually serving me that repast. And to my amazement, he said that’s a definite possibility! And so it was.

But even if you’re not a tea person, but are a theatre, comedy, improv, or Jane Austen fan, this is the event for you.

It’s a lovely idea, actually. And executed to perfection. The show is performed in the theatre’s *garden area, which absolutely lends itself to Jane Austen. *[They turned the parking lot into an incredible venue for this event. I could not envision it before I got there, but now I will never want cars there again!]

There are two aspects to this outdoor theatre experience. The production itself and the pre-show tea. I’ll discuss the show first.

Jane Austen Unscripted is exactly what the title says it is–an improvised presentation in the style of Jane Austen. But you don’t have to know a thing about her works to enjoy it. It’s just fun from start to finish. The show is one full story performed by a troupe of eight actors, (from a pool of about eighteen who work on different days.) At the outset, they take one suggestion from the audience of a situation that they then incorporate throughout the narrative. 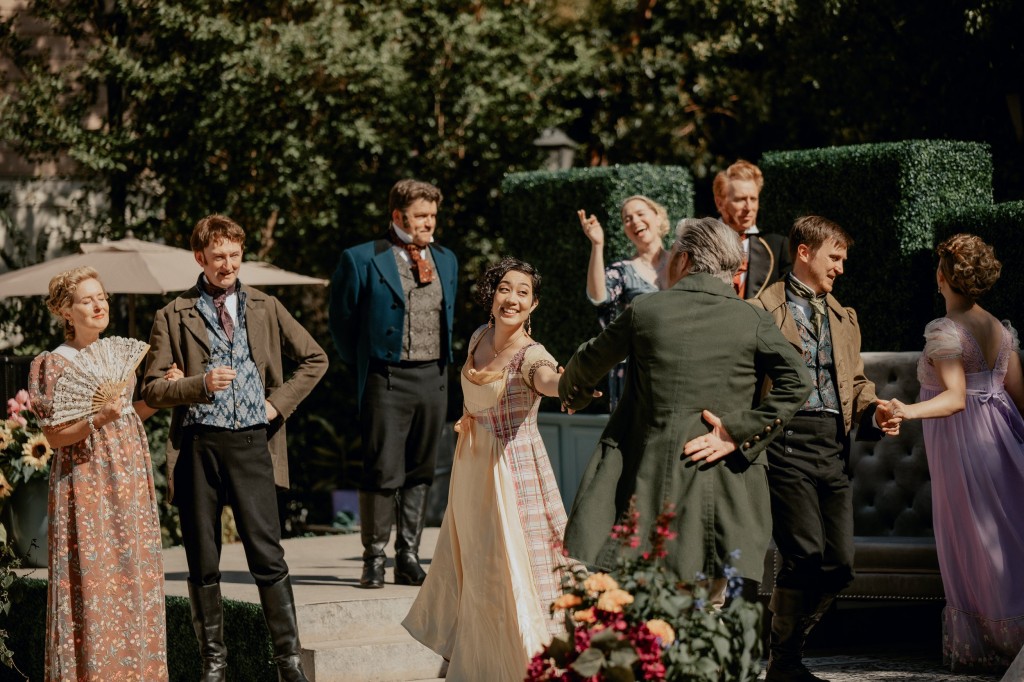 Photo by Ginger Sole, as is the one at the top of this review.

The outline of the story seemed somewhat set, (it has to be for the actors to know when each scene is over, and to move the tale along and finish on time,) but the actual lines are improvised as they go along. [Note: As a member of the original Laugh Factory Players back in the day, I can tell you that improv is far from as easy as it looks. Yes, of course some of the premises have to be pre-set, but most improv is just quick-thinking, with high hopes that you’ll be entertaining. So I applaud anyone who does it well, as this company definitely does.]

My friend Laura absolutely loved the show. She told me she thought the concept was “very unique.” She said, “We’re all familiar with traditional improv. But to see it combined with a period piece is sooo original.” I agree.

The whole cast is excellent, (including their off-stage sound effects,) and the audience we were part of laughed at just about every second of the show. (I was fond of the costumes and even the jewelry, as well.) My absolute favorite performer was Dan O’Connor, who could not have been more adept at his craft. I learned later that he’s the Founder of Impro Theatre, whose production this is, so improv is definitely Dan’s forte.

Another superb facet of the presentation is the music, which is spot-on all afternoon! The trio, (Ryan Whyman, Madeleine Eaton, and Mikala Schmitz,) play during the show and the pre-show tea, and I hope that everyone appreciates them as much as I did. The experience would not be as rich without those beautiful strains. And I loved watching the musicians enjoy the humor of the actors. 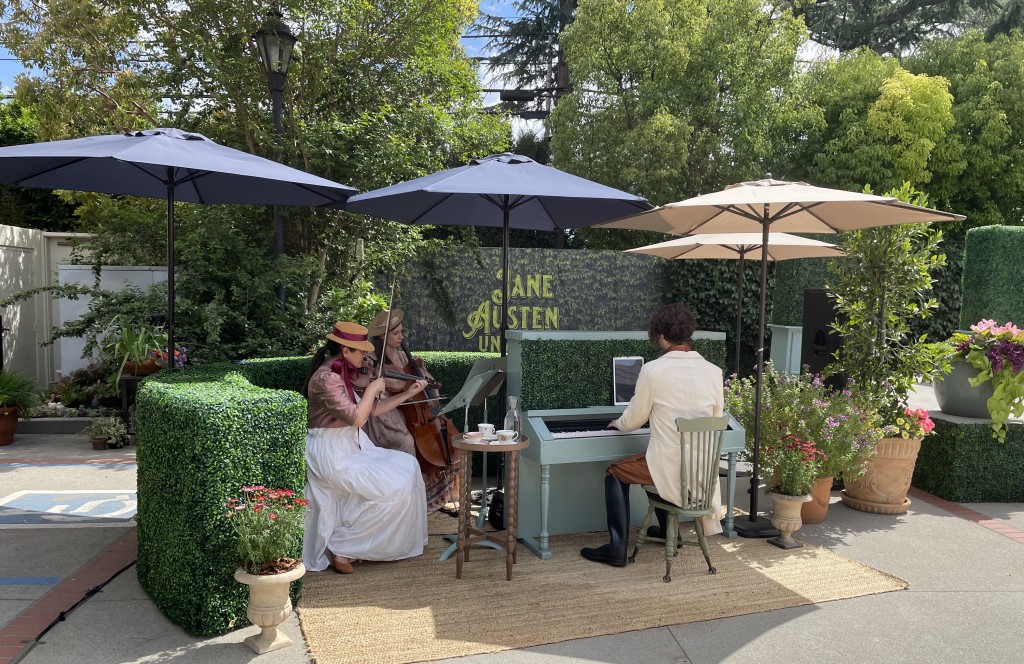 The musicians. Photo by Karen Salkin.

Jane Austen Unscripted is the perfect length of an hour and a quarter. On the day I saw it, it started and ended on time! What a miracle. But no one wanted to leave when the show was over, (not even yours truly who had a full quartet of NBA play-off games to watch before the day was done!) That’s because the entire event is delightful from start to finish! And everyone in the sold-out crowd was into all of it. Many of us lingered afterwards to mingle with each other and the actors.

Then there’s the Afternoon Tea aspect of the Garry Marshall outdoor stage experience. The actual refection and being seated at a table is optional, (although I highly recommend it,) but the entire assemblage gets to begin the fun as soon as they walk in. Whoever put the whole event together did a stellar job.

If you neglected to wear a hat, (either to block the sun or to get into the spirit of the day,) there’s a big table of appropriate chapeaus to borrow from. Near-by is a giant cooler of water with either attractive “crystal” cups or pretty paper ones. And each guest even receives a little gift on the way in!

Some of the theatre’s hat choices, (after many had already been spoken for.) Photo by Karen Salkin.

Several of the actors walk around the “garden” pre-show, and chat with the audience members in character. I usually hate stuff like that, but this time it was fun. (And I was so proud that the cast members admired my hat, which I spent a fortune on back in the day, and have actually waited decades to wear!!!)

The fare itself, for those who choose to have it, is simple but lovely. It’s a cup of Earl Grey tea, (which Laura said was “delicious,”) with a cucumber mint finger sandwich, a vegan chocolate-peanut butter bonbon, and two thumbprint cookies. It’s not as hearty as what you get at actual afternoon tea, but it’s just the right touch for this endeavor. 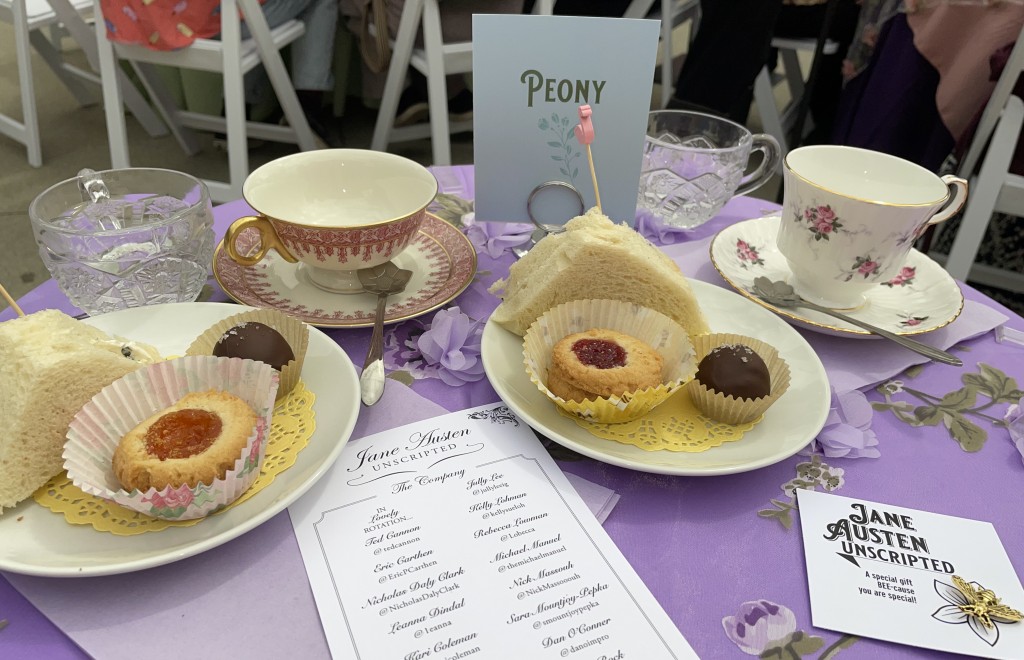 But even with all of that, (the show, music, food, and hats,) my absolute favorite part of the whole day was beholding the stunning set-up. I’ve been to decades worth of professional afternoon teas, and even thrown many myself, but I have never ever seen such a stunning presentation! I wanted to live in it!

The tablecloths alone took my breath away. They’re triple layers of loveliness, all in the same color-scheme, but varied a bit from table to table, and topped with the most exquisite sheer, flowered material. Then the settings feature lavender napkins, yellow doilies, and charming mismatched cups and saucers with unique teaspoons. I didn’t want to use any of it; I just wanted to sit back and take it all in forever! 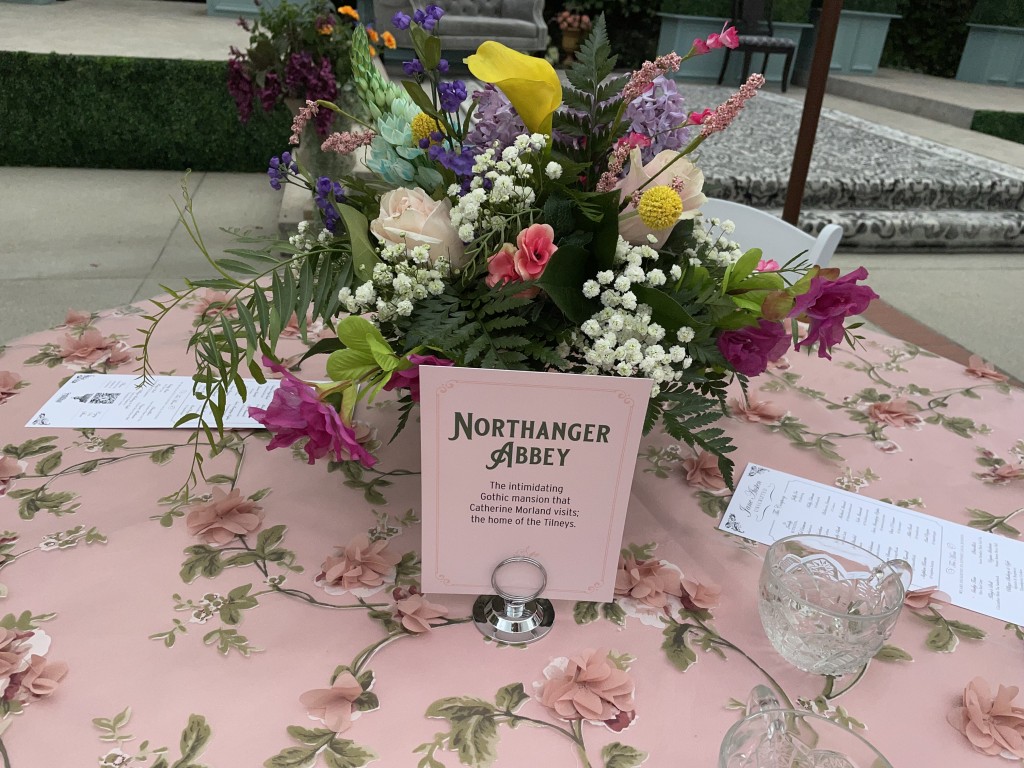 Event producer Joseph Leo Bwarie was kind enough to share his design secrets with Laura and me after afterwards. Let me put it this way—I need to never go shopping without this dude ever again!!!

To round it all out, each table is identified by a fun name, (rather than a number,) and there are several umbrellas around the bigger ones.

Even if you’re not partaking in the tea service, you’ll still enjoy the atmosphere. (All you’ll be missing is being seated at a table instead of the row behind them, and having the treats.) But you’ll still get to mingle with the cast before and after, and enjoy the show, music, borrowed hats, and dressing-up. So it’s a toss-up of whether to spring for the tea part or not, but I do recommend it. 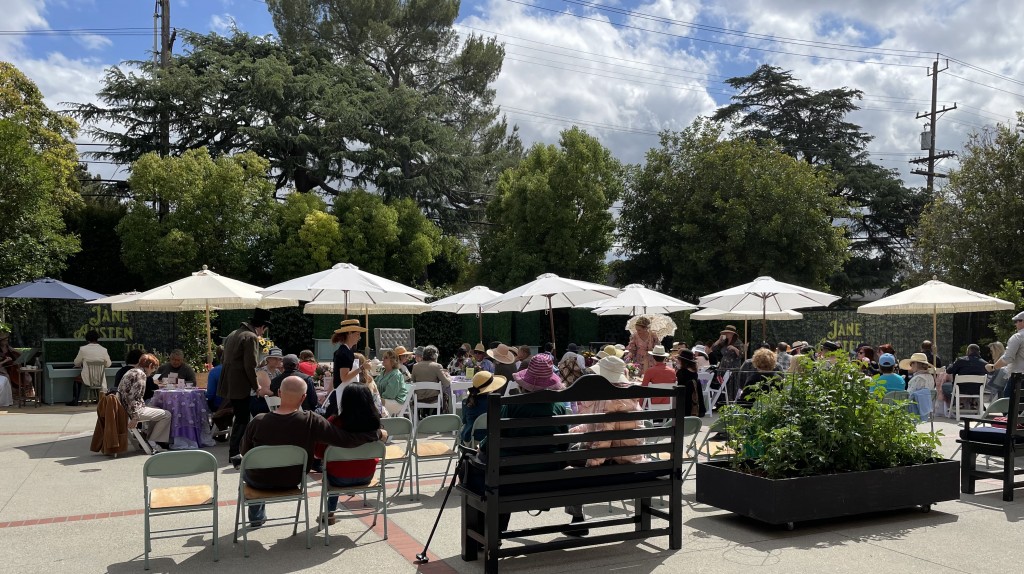 So here are a few extra tips for attending Jane Austen Unscripted: please be fun and dress for a garden tea, as Laura and I did, along with many of the other attendees. Dressing-up is always half the fun of going any place that merits the effort.  If I hadn’t painted a different Easter egg on each of my nails, (yes, it did take forever,) I would have even worn tea gloves. A garden-party-type bonnet is not only a lovely touch, but important to block out the sun. (But, as I said, the theatre lends you one if you don’t have your own.) And speaking of the sun, please, please, please remember to put sunscreen on, all over! Do it even on a cloudy day, which can be the most dangerous. And, if you’re engaging in the tea party itself, don’t arrive very hungry, but look forward to the tea and tidbits.

And just look forward to Jane Austen Unscripted in general; a happier day of entertainment I cannot imagine.