Trending
You are at:Home»THEATRE»THEATRE: JACQUES BREL IS ALIVE AND WELL AND LIVING IN PARIS
By Karen Salkin on July 11, 2017 · THEATRE

JACQUES BREL IS ALIVE AND WELL AND LIVING IN PARIS

When I was a high school theatre student in Brooklyn, I was so excited that our teacher was taking us to the city to see an off-Broadway production of the musical revue, Jacques Brel is Alive and Well and Living in Paris. My much older boyfriend had just returned from a trip overseas, and insisted on taking me out to dinner…in the pouring rain! So, of course I got deathly ill, and had to miss the show. And, no exaggeration, I have felt bad about it ever since. But not anymore. 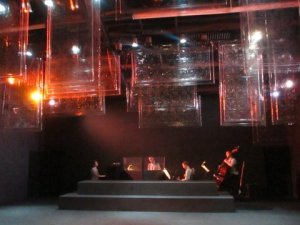 The set and musicians. Photo by Karen Salkin.

Going by the old rule, “If you have nothing nice to say, don’t say anything,” this is going to be a very short review. I was actually going to pass on writing it, because there is nothing good to say about this production of Jacques Brel is Alive and Well and Living in Paris, outside of the musicians and some plastic decorations hanging down on the set. Well, actually there is one other good thing—Jacques Brel is really not alive, because seeing his work performed like this might have killed him!!!

I decided to go ahead with this review because I’ve been running into several people who’ve also seen the show, and they’ve begged me to warn away other potential audiences. A couple of men I sat next to at a different show opening in LA recently, told me they feel that Jacques Brel…, in general, is a show that every theatre student must see. But they emphatically stated that this Odyssey Theatre production is so awful that they had to leave at intermission.  And this duo sees almost every show Los Angeles has to offer!

I really don’t like to hurt anyone’s feelings, but nor do I want my readers to spend their hard-earned money on a less than fabulous theatre experience.  So, let’s dive in. (I’ll try to make it quick. But I can’t promise painless.) 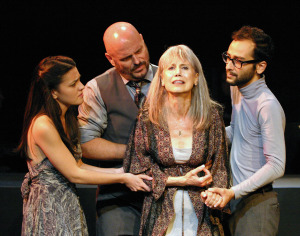 First of all, the entire show is just a musical revue, with no story, which I knew going in, and would not have minded, had it been even a little bit entertaining.  I was familiar with several of the songs, and was interested to hear the others. Jacques Brel’s style is supposed to be something to behold.

I don’t know exactly where the blame lies for the weakness of this production. Probably not with the quartet of performers, who, while not very good, are just doing as instructed, even though they all seem to embrace the gooniness.  It must lie with the director, Dan Fishbach, and the producer, Ron Sossi.

The entire production is totally devoid of charm, although Jacques Brel is said to have had that in spades! The four performers sing in all combos—sometimes alone, sometimes as a duo, and sometimes as a group. But their voices are mediocre at best, and don’t blend very well, until the very last song, the gorgeous If We Only Have Love, most of which they sing lying flat on their backs.  On the unadorned floor.

Which brings us to the awful movement. I can’t even call it “choreography.” I felt like I was watching either a singing class recital—a bad one—or, more aptly, a group of people in some small town who got together and decided to put on a show. 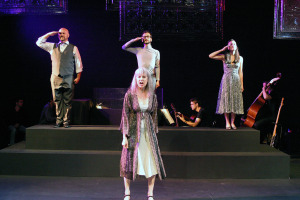 There are no special voices in this group, or even particularly good ones. These songs are not the kind that need someone like the amazing Adam Lambert to make them great, but they deserve at least the performance quality of Bernadette Peters! I was so frustrated by the whole thing that I had to go home and play Jacques Brel’s songs by people like Johnny Mathis, and even Jaques Brel himself, just to know what I was supposed to have heard that night.

Jaques Brel did not have the greatest voice himself, but he had a soul, which came through in everything I’ve now seen of his. And the songs themselves are supposed to be the stars, which did not happen at the Odyssey. All the people involved need to trust their audience, and not rely on dumb gimmicks and superfluous movements to convey the message here.

I was already familiar with several of the songs, and they’re beautiful, but these performances are so frustrating that it ruined even those numbers for me. And many of the songs are over abruptly, with no real endings! That’s so annoying.

I’ve heard that this theatre often does quality work, but, so far, in the few shows I’ve seen there in the past year or so, they cannot prove it by me. 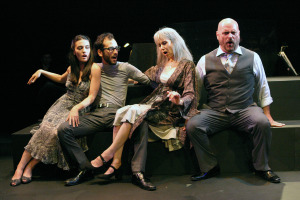 The direction of Jacques Brel is Alive and Well and Living in Paris is brutal.  And the stupid movements are sort-of creepy.  For instance, on a few occasions, the ones who aren’t singing at the moment are doing silent little scenes in the background, such as looking into each other’s eyes, or fawning over another cast member.  (Or two! Oysh.) Those bits reminded me of high school kids doing a show, who think they’re so cool to be doing it.  And at one point, it’s the young guy and the older woman hanging all over each other, and all I could think about was Mary Kay Letourneau and Villi Fualaau, (when they were first together, because they’ve normalized now,) but this scene was so much worse. (It’s about a forty-year age gap here. Trust me–no one wants to see that in a singing revue! Nor most other places, either!)

Of course, if you’re desperate to hear the songs of Jacques Brel, perhaps you should still see it. But for no other reason. That’s actually the only redeeming quality of the show–getting to hear the songs of long-gone Jacques Brel sung live. And since, as I believe, the lyrics are supposed to be the attractions here, at least we can understand them, so that’s a positive. And the younger woman has fabulous tight upper arms, which I would kill for! (But I would not see this show again for them.)

I do semi-thank the Odyssey Theatre, though, because this production made me finally stop feeling bad to have missed this show when I was a teen-ager. I only wish that I had missed it this time, as well!