Trending
You are at:Home»THEATRE»THEATRE: IN THE HEIGHTS
By Karen Salkin on June 29, 2010 · THEATRE

In The Heights is one of the very few Broadway musicals that Mr. X was looking forward to seeing. We saw a bit of it on the Tonys two years ago, when it won four awards, and it looked great! As most touring companies nowadays don’t have the original Broadway casts, we were both especially excited to get to see Tony Winner Lin-Manuel Miranda recreate his starring role (Usnavi), which he’s doing exclusively for the Los Angeles engagement at the Pantages Theatre. (I think he actually had to step in at the previous city.)

For you non-theatre types, Lin-Manuel played the crazy guy, Alvie, who tries to room with the doc on this season of House. You’ll recognize him right away. I was surprised to realize that he did only two episodes of that drama because it seemed like a lot more–he got a lot out of his performances. 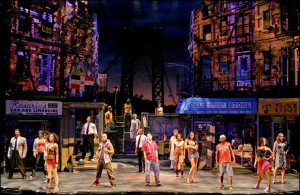 I love this New York set!!!

In The Heights is one of those new-fangled Broadway musicals, in the vein of Rent and Spring Awakening, neither of which Mr. X and I are fans. (But we’re always willing to try!) We both enjoyed this one enough, but far from loved it. The big number that we had seen on the Tonys turned out to be the opening number, and the rest of the show didn’t quite live up to its promise.

It’s a convoluted, not at all believable, story that we didn’t understand half the time. And the ending made no sense in the scheme of this tale. But, it’s still fun to see for the excellent dancing, music, voices, and especially the Anna Louizos-designed set!!! Being from New York, I loved it! I thought it was brilliant and very authentic to that neighborhood, and was the most believable part of the show.

The interesting twist of this musical is that most of the songs are at least partially rapped, which Lin-Manual Miranda is a master at. You can totally understand his lyrics, which is good since he’s the creator, composer and lyricist! (He won his Tony for Best Original Score.) And all of the singing voices are excellent, especially Rogelio Douglas Jr. (Benny) for me and Arielle Jacobs (Nina) for Mr. X. And he pointed out that every single one of these singers puts to shame the mainly awful American Idol cast this year. (The girl who’s playing Vanessa until July 4, Sabrina Sloan, was actually an almost-Top 12 contestant in Season 6.)

Two highlights for us were the excellent dancing, and Shaun Taylor-Corbett, who played the young cousin of the Mr. Miranda’s character, and had the most amusing line delivery.

I’m really recommending that everyone see this show. Just keep your expectations down a bit, and enjoy it for what it is.

A few audience notes on opening night: A couple of girls were off to the side of the audience with a music stand of sorts in front of them, and a small light. I thought it had something to do with the orchestra at first, but it was signers! (For hearing impaired patrons.) What a lovely concept! I realized that might be a function of either the Pantages itself, or the lovely Broadway L.A. program. So, please check with one of them, should the need arise, ahead of time. It really brought a smile to my face to watch it being done.

That’s the yang. The yin is the discovery of yet another rude audience behavior, one I was never aware of before! The guy of the couple right next to me kept his phone face down in his lap and turned it face up every few seconds, probably to check scores or something like that. (I’ve seen guys do that a lot for that purpose, but usually at ballgames, not in a dark theatre!) His girlfriend asked him to stop a time or two, to no avail. Finally I had to say something because they were ruining the show for me. And I had just eaten heavy garlic, so he probably thought he should stop or I’d be breathing on him with awful garlic breath all night!

The last note is that we saw the Los Angeles Mayor, Antonio Villaraigosa, in the audience before the curtain. In light of the recent accusations that he accepts free tickets to events without reporting them, (state law says he must report tickets as “gifts,” unless he’s performing official or ceremonial duties,) I jokingly asked Mr. X if he thought that the Mayor had paid for his opening nights seats. (For the record, most VIPs get theirs gratis.) Well, at the curtain, he arrived on stage, and I whispered that he must be bringing the cast a plaque to commemorate the show being in L.A. (And justify his appearance as “official business.”) Sure enough, out comes a girl with a framed declaration! We were hysterical!

A lovely ending to the evening was the classy after-party across the street at the gorgeous W Hotel, catered by their Mediterranean (in all aspects of the menu) brasserie, Delphine. Mr. X was anxious to attend his krump session that night, so we didn’t stay at the party long enough for me to form an opinion of their cuisine, but I’ll try to get back there to do a full review for you guys as soon as I can.