Trending
You are at:Home»THEATRE»THEATRE: I’M NOT A COMEDIAN… I’M LENNY BRUCE
By Karen Salkin on September 21, 2022 · THEATRE

As a native New Yorker, and a Jewish one, to boot, along with being in the comedy world, of course I’ve always known the name Lenny Bruce. But all I knew, really, is that he was considered a “filthy comedian” because he used “dirty” words that are now de rigueur among stand-up comedians. 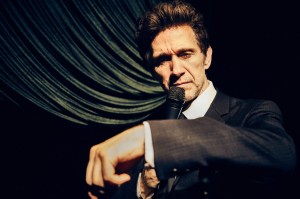 Ronnie Marmo as Lenny Bruce. Photo by Doren Sorell, as is the one at the top of the page.

His era was way back in the day, (the ’40s-’60s,) so he was always in legal trouble over that usage. I don’t know why he couldn’t just stop, because I’m assuming he didn’t enjoy being in jail, but that’s just me. It all went down way before my time, so I wasn’t at all familiar with his situation.

Nor did I ever have any interest in knowing more about him. Until I saw this one-man show last week-end. And as soon as I got home from I’m Not A Comedian…I’m Lenny Bruce, Mr. X and I watched videos all night of the real Lenny Bruce, whom actor Ronnie Marmo portrays here. (More on that in a minute.)

Besides the occasion being the opening night of the presentation itself, Saturday was also the opening of the entire Theatre 68 Arts Complex, (where the various theatres themselves are named after the children of the producing partners!) It’s located in the always happening, hipster-populated NoHo Arts District in the Valley, so the entire area was really hopping that night, which was fun to be a small part of.

After the show, they had a reception with a beautiful spread worthy of a Broadway opening. My friend Laura said she witnessed everyone eating a lot, but the platters never seemed to get even close to depleted! Before the pandemic, I used to go to smaller theatre opening nights all the time, and this was the classiest fete I’ve ever seen at one.

During it, the assemblage was invited to explore the entire complex, which included a quartet of little theatres. It was all very interesting. And the theatre personnel could not have been nicer all night, which you know I appreciated.

There were also a few celebrities among the crowd that night, including Criminal Minds‘ Joe Mantegna, who directed the play, and Dan Lauria, who played the father on the original The Wonder Years. 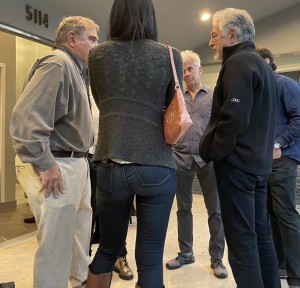 Dan Lauria on the left, Joe Mantegna on the right. Photo by Karen Salkin.

As for this production of I’m Not A Comedian…I’m Lenny Bruce, if you’re a Lenny Bruce fan, this might be the show for you. I’m sure you’ll enjoy seeing him be resurrected by Ronnie Marmo, the man who wrote and performs it. His research appears to be extensive because a lot of the show is word-for-word parts of Bruce’s old acts, and the rest is comprised of snippets of his life.

As a matter of fact, when he mentioned Lenny’s mother’s name, Sally Marr, I almost choked because I had completely forgotten that I knew her back in the day! In the early years of my TV show, Sally and I were at many of the same events, and she had told me she was a fan. I appreciated it when she said that I was “so funny,” thinking she was just a nice little old lady, but when someone at one of the fetes clued me into who she was, it meant so much more. So it was nice that I’m Not A Comedian…I’m Lenny Bruce brought those memories flooding back to me. 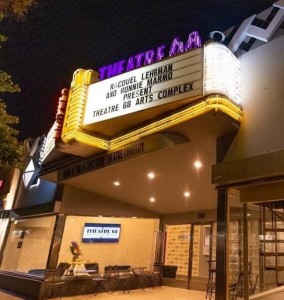 Photo courtesy of the production.

Now in all honesty, aspects of this show perplexed me somewhat. I assumed that because it’s about the life of a comedian, it’s a comedy, but Laura and I wound-up not so sure about that. Neither of us laughed at all, nor did several people around us, although many other audience members did from time to time. So perhaps it’s meant to be a straight play with some humor. After all, the title itself declares, “I’m not a comedian.” (I don’t know how it’s billed, actually—the only programs are digital, and I didn’t think to do the QR code that night.)

When I got home that night, and researched Lenny Bruce, I also came upon a clip of I’m Not A Comedian…I’m Lenny Bruce from a previous run of the show. The audience was sitting at tables and appeared to be enjoying drinks, so I assume it was shot during the off-Broadway stint a few years ago. It seemed to have a lot more energy in that “cabaret” environment, perhaps spurred on by the imbibing crowd. I don’t drink, so I can’t say for sure how that activity would manifest in a theatre atmosphere.

Since Ronnie Marmo is now approaching his four hundredth show, (which you might like to help him celebrate this coming Saturday, September 24th,) during this North Hollywood run, (and major kudos to him for that amazing accomplishment!–I have no idea how any actor is able to repeat the same words night after night; I couldn’t even repeat one of my many stories on my own show!,) perhaps he’s just running out of steam a bit. 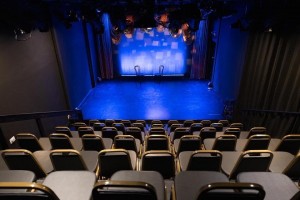 The stadium-seats theatre. Notice the perfect backdrop on which to write info during the show. Photo courtesy of the production.

While enjoyable and informative, Laura and my critical eyes did have a few slight issues with the show, which I would be less-than-honest to not mention. First of all, parts of the scenario were sort-of confusing; we were lost several times. It would have helped immensely if each scene’s place and date were written on the already-available big screen that served as the backdrop.

And often we didn’t know if Marmo was portraying Lenny or his wife or mother or daughter or a judge or attorney or what; he didn’t seem to change voices or demeanors to let us in on what was happening in some scenes. The director should fix that.

And speaking of his voice, at the end of the show, they play a brief soundbite of the real Lenny, which is enlightening, but the downside is that it shows that Ronnie doesn’t capture his voice during the performance, which is slightly disappointing. 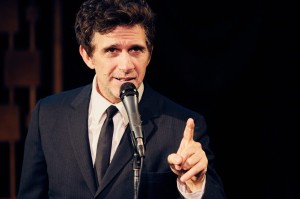 And a word of warning here: People on a first, second, or third date might want to avoid the show because at one point, “Lenny” asks the audience if they’ve ever performed fallatio, but not in that obvious language. Laura said she was humiliated to be sitting next to an old man when they turned the lights up to see everyone’s answer! It would definitely not be comfortable if you’re with a quasi-stranger. (Or with your grandpa. Or children. Or if you’re a man with your wife who says she has, which is news to you!)

Still, at just a tad over an hour and a half, I’m Not A Comedian…I’m Lenny Bruce is a non-painful theatre experience, and an opportunity to learn about a very famous and controversial before-his-time comedian. And that’s a positive.

So if you’re in LA, I suggest seeing it before the show goes on tour next month. And do not miss the chocolate chip cookies at the concession stand!