Trending
You are at:Home»THEATRE»THEATRE: HELLO, DOLLY
By Karen Salkin on February 6, 2019 · THEATRE

I have a personal feel-good memory with Hello, Dolly star Betty Buckley, which I’ll share with you at the end of this review, after all the show info. When you read it, you’ll understand why I was especially happy to see this production at the Pantages Theater in Hollywood last week.

Believe it or not, I’ve never seen any incarnation of this iconic musical before! Growing-up in New York, with teacher parents, I saw at least thirty or forty shows a year, but somehow, in all that time, I missed Hello, Dolly! I never even saw the film version!

So I thank the Pantages immensely for finally filling that hole in my musical theater education. 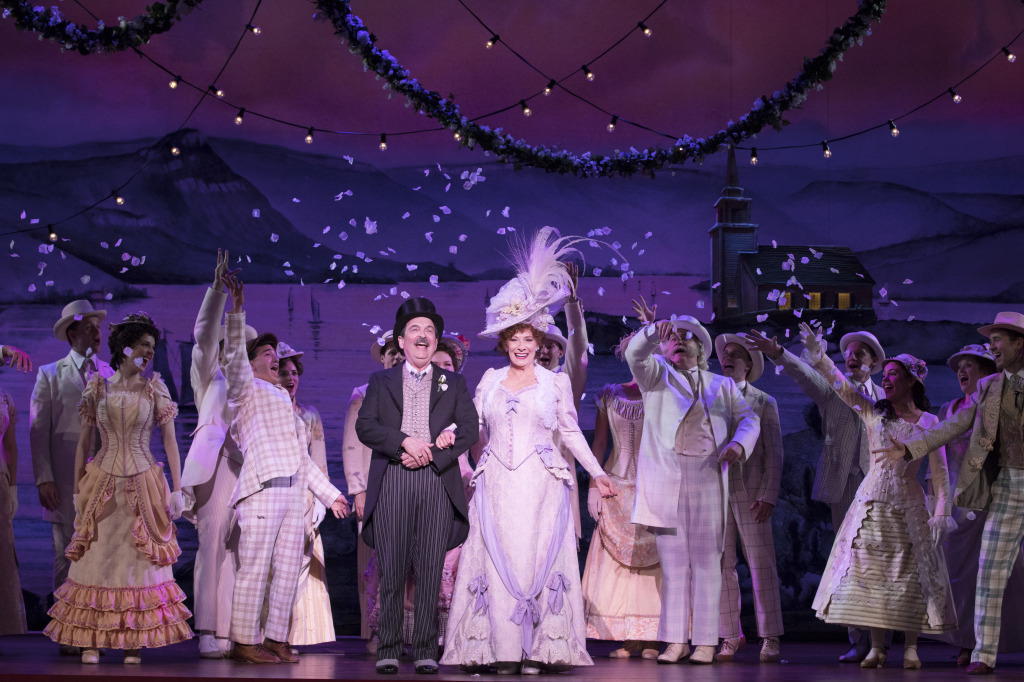 Photo by Julieta Cervantes, as is the one at the top of the page.

As to this actual touring production, it’s delightful! It’s chock full of talented people, everything is colorful, the music is fun and familiar, and it has a happy ending. What’s not to like?

If, like me, you know nothing about the story going in, this is all the heads-up you need: it’s about an old-timey matchmaker in New York. And it’s one of those classic musical comedies, with plenty of “scrapes” that are just waiting to be resolved.

If you’ve never seen any version of Hello, Dolly, you’ll really enjoy this one. And if you have seen the show before, I think you’ll love this particular presentation even more. 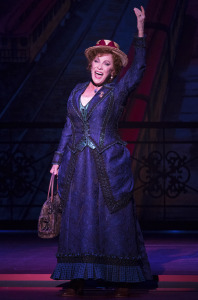 The Pantages opening night audience went nuts over it all, but they were especially enthusiastic about Betty Buckley. Every little word she uttered, lyric she sang, and move she made brought wild applause. The guy behind me was so gaga over her, I thought he was going to have a heart attack!!!

I have to admit that I had never seen her back-in-the-day TV series, Eight Is Enough, nor her Tony Award-winning work in Cats, (another uber-popular musical I’m in the dark about,) so I was thrilled to finally witness her full talent, especially her singing. (I did see her in Grey Gardens here in LA a few years ago, but it wasn’t a big singing role. And she wasn’t even in the first act, though, as I indicated in my review of that show, her Prologue was a thing of beauty. So this performance was pretty much a revelation for me.)

And let me tell you, Betty Buckley sings great! (It may have been my imagination, but I could have sworn that I detected that she was fighting a bit of a cold that night. If that was, indeed, the case, then that makes her achievement that much more incredible.) 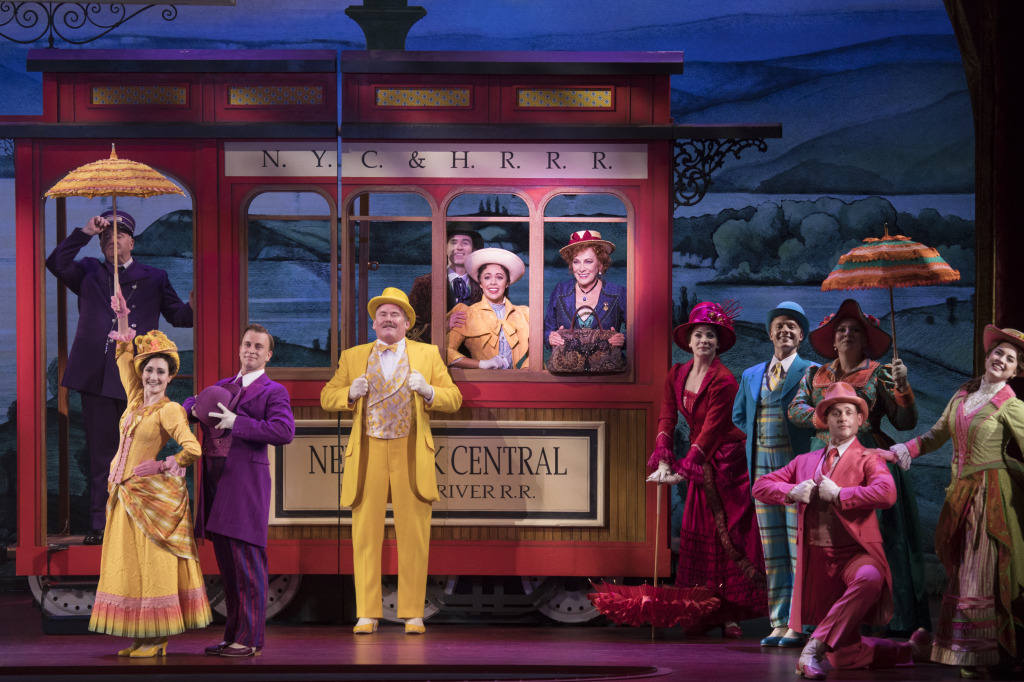 Even though the role of Dolly is the one I assume everyone goes to see, there’s so much more to the show than that. The entire production is excellent and charming. Yes, I do realize that Hello, Dolly is very old-fashioned–not just the plot but everything about it—but not every musical has to be Hamilton or Dear Evan Hansen. (Actually, I prefer for them not to be!) This one is just a lot a fun; nothing deep about it. (For me, there’s enough of that in real life; I don’t need to see it in my escape entertainments.)

But there’s absolutely nothing old-fashioned about the fabulous choreography by Warren Carlyle, (with a nod to Gower Champion’s original steps.) Many of you know what a fan of dance I am, and I could not get enough of it here. The dancers are stupendous, every single one of them, especially in the jaw-dropping number, The Waiters’ Gallop. As lengthy as that dance is, I wish it had gone on for twenty more minutes! 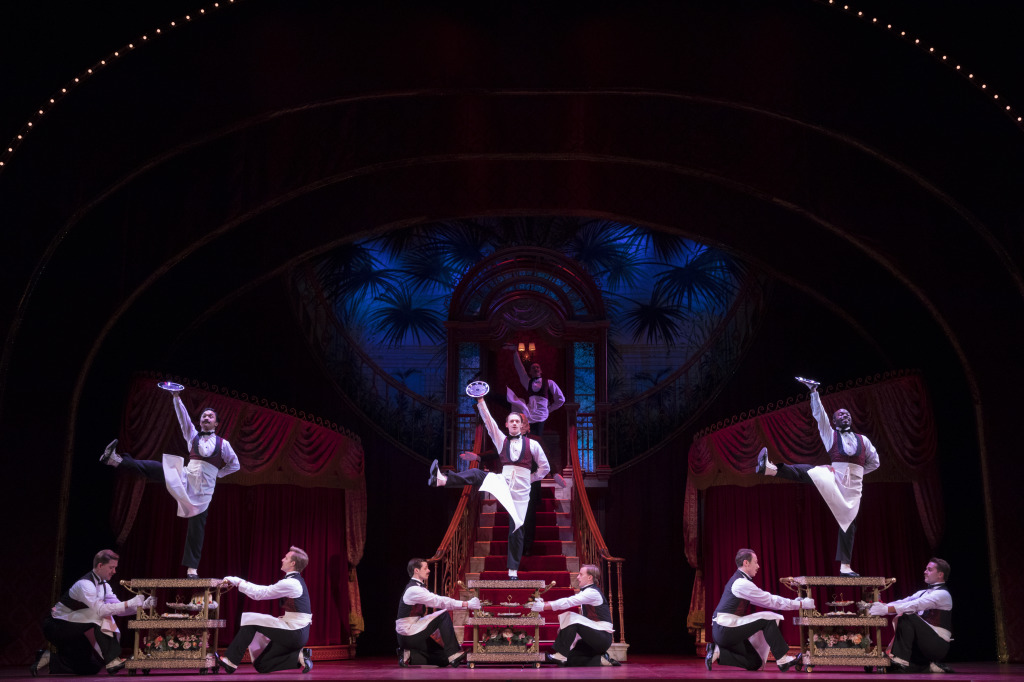 And what great tunes! I had no idea that so many famous songs come from this show. In addition to Hello, Dolly, (which I knew about, of course—duh,) it features Before The Parade Passes By, Elegance, Put On Your Sunday Clothes, and It Only Takes A Moment, (which I haven’t been able to stop singing all week!)

What a wonderful spectacle this whole show is! I loved all the colors–of the sets, of all the costumes, and, of course, of the piece de resistance—Dolly’s red gown as she comes down the stairs in Act II. The crowd I saw it with was cheering for that entrance, before any words were even sung or spoken! The entire evening is quite the celebration of theatre.

The highlight of the entire shebang for me was getting to see Jess LeProtto, one of my all-time favorite dancers on So You Think You Can Dance, work in person. That guy can dance his butt off! I’m so glad this production gives him that opportunity to shine, and not just blend in. This is very inside, but for other dance fans, you’ll understand—Jess reminds me of a grown-up JT Church, perhaps my favorite dancer ever! So that’s how impressed I am with Jess! 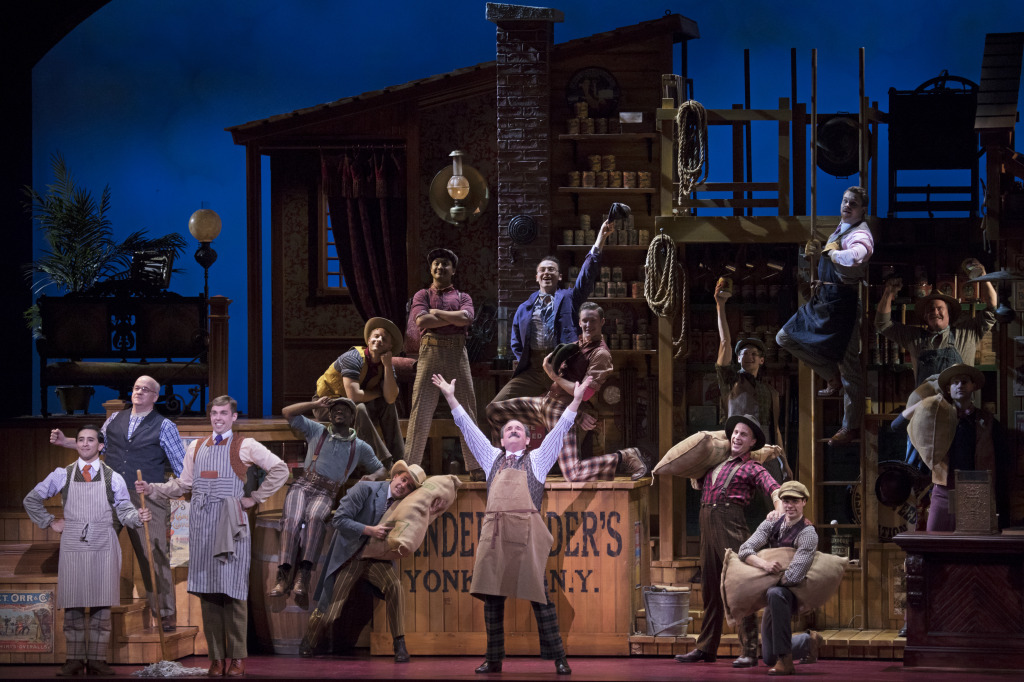 The males of the company, with Jess LeProtto and Nic Rouleau on the bottom left. Photo by Julieta Cervantes.

Everyone in the cast is spot-on, but the other stand-out for me is Nic Rouleau, who joins Jess as the duo of clerks in the store owned by Dolly’s love interest. He has the perfect Broadway singing voice. And the two of them do that musical comedy schtick together with aplomb.

Seeing this show was especially poignant at this time, because the original Dolly, Carol Channing, passed away just two weeks before. A few times on opening night, I found myself picturing her up on that stage. Having Hello, Dolly run in Los Angeles at this time is an unexpected tribute to her, which is the icing on an already delicious cake. 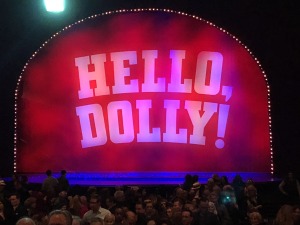 When I was a young girl just starting out in the business, even before I began doing my TV show, I got to go to awards shows and the like because of Mr. X’s career. (Yes, we have been together that long!)

So when I was shopping for a spectacular dress for my very first Golden Globes, I ran into none other than Betty Buckley, who could not have been kinder! She loved everything I tried on at one famous boutique on the Sunset Strip, and highly encouraged me to get one of them–an elegant pink creation.

But I wanted to explore other options, and later on, I came up with the absolute best dress that anyone has ever worn to an awards show ever. (It was a Norma Kamali bright red spaghetti-strapped number, with tiny red Superman spandex underpants under just strings! OMG!) I did worry that I would disappoint Betty the next night at the Globes, because I hadn’t worn her choice, but then I realized that she wouldn’t even remember me!

But how wrong I was! While Mr. X and I were waiting for our limo at the end of the night, she came right up to us, and said she’d been looking for me all night to see what I was wearing. I couldn’t believe that kindness. And she went nuts over my choice, and told me that I did the right thing to have kept looking.

I’ve never forgotten that encouragement. So, when I saw that Betty was starring in the Touring Company of Hello, Dolly at the Pantages, I knew I had to return the favor. But it turned out to be a bigger favor to myself!!! So do yourselves one, too, and see this show!