Trending
You are at:Home»THEATRE»THEATRE: HEAD OVER HEELS
By Karen Salkin on November 16, 2021 · THEATRE

As many of you know, I hadn’t been to a theatre of any kind, (indoor, outdoor, dance, plays, musicals, circus, magic, nor even movie theatres!,) since early March 2020!!! That’s over a year and two-thirds ago!

I’ve been invited to many presentations for about three months now, but I still never felt comfortable being that close to strangers, even though I was double-vaxxed. But now that I’m triple-vaccinated, I decided it’s time to get back out there.

And what better place to start than at the official State Theatre of California, The Pasadena Playhouse, which I love and have missed, with what I knew would be a party show, Head Over Heels? 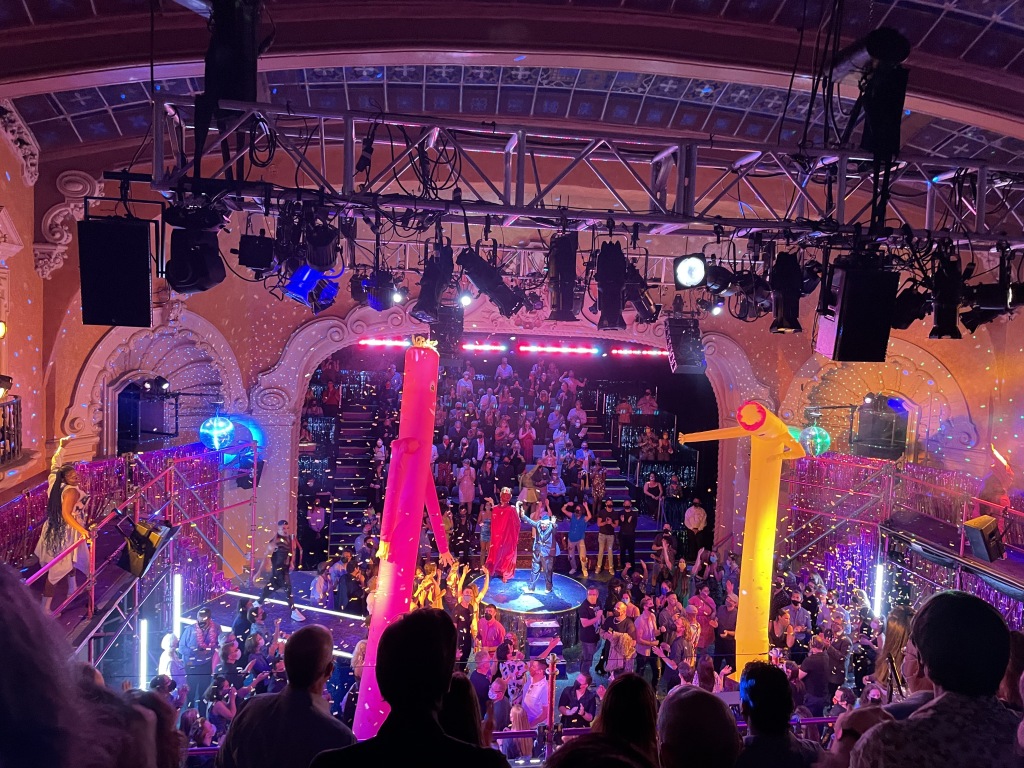 Jumping right to the colorful finale! Photo by Karen Salkin.

In case you’re not familiar with it, Head Over Heels is not the story of what I think Mr. X should be over me; instead it’s a campy “jukebox musical” that uses the songs of the ’80s punk girl band, (who are the latest inductees into the Rock & Roll Hall of Fame last weekend,) the Go-Go’s. [Note: The erroneous apostrophe drives me nuts!!!] I have to admit, their tunes are not my jam, at all, but I didn’t let that stop me. And neither should you! It’s all upbeat, happy music, to which all the patrons on the floor, (which I’ll explain in a minute,) are encouraged to move and groove during the show! And who doesn’t need that movement and exuberance these days? What a wonderful opportunity to cut loose while getting your culture fix!

The story is loosely based on a sixteenth century literary work, The Countess of Pembroke’s Arcadia, but I doubt many of us have read it, so the scenario should be new to just about everyone. Even though it was written five centuries ago, the presentation of the tale is ultra-modern. The cast is a potpourri of humanity–there are men, women, black, white, Latino, gay, straight; there’s even a drag queen. What’s not to like? 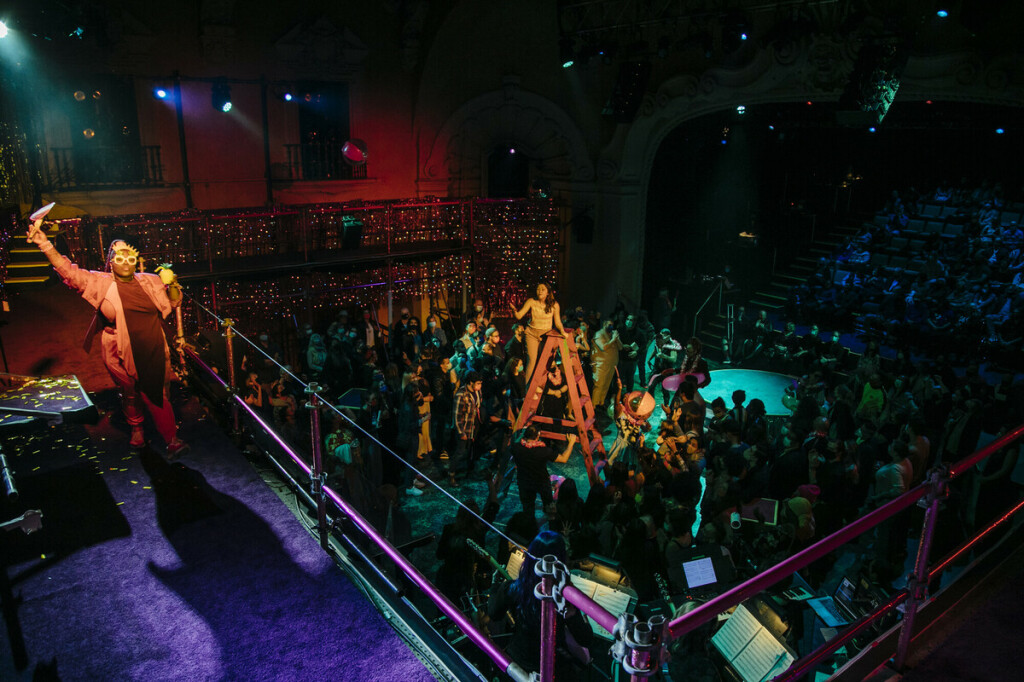 The Vacation number. Photo by Jeff Lorch, as is the one at the top of this review.

I have to admit that I had absolutely no idea what was going on for most of the show, (but I never get Shakespeare, either,) however the story itself is not the point here. The reasons to see Head Over Heels are the music and the different kind of theatre experience and to get back out into life after such a long time in our homes.

The story is an old-timey one, juxtaposed with less-long-ago songs by the Go-Go’s and lead singer Belinda Carlisle on her own. I actually knew only two of them—the opening and closing number, We Got The Beat, and Vacation, (which was the best overall number to me because it included beach balls and bubbles!) But my friend Marc was thrilled to hear his favorite old club song, Mad About You.

One personal word on the music, in general. The night before the opening, my neighbors had a party and played pounding music from 5PM to…11:30 the next morning! (The day of this show.) So it was a tad hard for me to hear more of this type of music that night. But all the other audience members I saw it with were totally down to party. 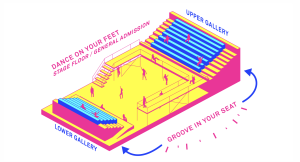 The official diagram showing the seating, and standing, choices.

Which is actually one of the positives of Head Over Heels–you can forget your own problems for the ninety+ minutes, and just go with the flow.

Part of the fun is the special configuration of the theatre designed for just this production. I meant to examine it, but when I saw glittering curtains and colorful lights, I forgot all about the inspection. Suffice it to say that where the theatre seats usually are, there’s a dance floor with one round elevated stage that Marc said was reminiscent of the risers that elephants step on in the circus. Then, where the actual stage usually is, there are several rows of stadium seating, with seats also in the mezzanine across the way. When you purchase your tickets, you have a choice of which area from which to see the show—one of the seated sections or on the dance floor. (Had it been a hip-hop musical, you know I would have chosen the floor, of course! But for the Go-Go’s, I chose to sit.)

No matter which vantage point you choose, it’s interesting that all the action happens on several different levels, often simultaneously, making all the areas equally entertaining.

I especially loved the all-over Christmas lights that are accentuated when the stage lights get low. They’re fun anytime, but this is definitely the season for them. 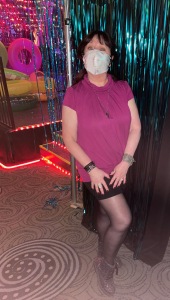 Karen Salkin posing in front of part of the entrance to the stage area, with her sparkly boots and mask, (which the camera flash makes hard to distinguish.) Photo by Marc Winer.

Actually, everything is so sparkly! I adored all of that. I was so glad that I wore boots to match the set, even though I had no idea beforehand. But several audiences must have had some pre-knowledge of the show because I saw blinged-out boots and other footwear, along with some shiny outfits, all around me. This is a show that it’s fun to get dressed-up for. (Sidebar: When my parents were visiting me once during the run of my cable show, my father opened my closet with all my sequined, jeweled, and tiny clothing, and asked incredulously, “What is this? Costumes?!” I had to explain that no, it’s just my basic wardrobe!)

Speaking of attire, do not bundle up to go here; the almost century-old building is always warm! The man who spoke at the beginning of the presentation even mentioned that, although they now have a new ventilation system, which is excellent for all of our health, the cooling aspect of it is still to come.

As to the very accomplished cast of Head Over Heels, the octet can definitely sing. Marc especially enjoyed Alaska 5000, a drag performer from RuPaul’s Drag Race who plays the Queen here. He got a real kick out of her. And we both enjoyed the all-girl band, which was front and center on a portion of the dance floor.

I don’t know if the original work was written as a comedy or not, but this production was definitely played for laughs. It’s not my cup of tea, but the opening night audience was chuckling along.

The tale isn’t preachy, but it has a message, and that is that we’re all beautiful. (I got that from a mirror that was set-up on the way to the dance floor, and then when it seemed to come up near the end of the show, I said, “Ah.”) 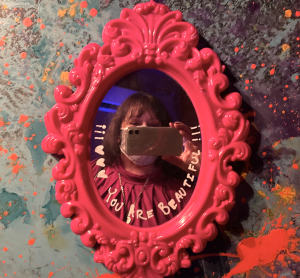 The message mirror on the way in. Photo by Karen Salkin, as you can see in the mirror!

One more thought on the music. My whole life, whenever I’ve gone to any kind of musical event, including the symphony, I’m always amazed that I’m the only one bopping to the music. I can never understand how people are able to sit still during all that. So I was glad to see that most attendees to Head Over Heels were into it. There was lots of moving and grooving, clapping, and even singing along. And all of those activities are encouraged throughout.

After my recent article suggesting that everyone read their theatre programs, (which you can still read here: itsnotaboutme.tv/news/karens-tipstheatre-read-your-theatre-programs,) at first I was a bit perplexed that there didn’t seem to be any programs for this show. But at the end, I discovered that the presentation of them was just done really cleverly. As we exited into the lobby, there were QR codes posted on the walls for the people who wanted to just read the online version, and then the actual paper ones were on tables for us to pick-up on our own, so they weren’t touched by anyone else who would have handed them out. I appreciated that. 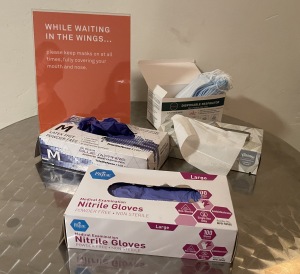 One of the tables with items to help us stay safe. Photo by Karen Salkin.

And while I’m being appreciative, I’m thrilled that the theatre not only requires proof of Covid vaccination, (including ID,) but they also insist that everyone wear a mask in the theatre at all times. And even better—there are signs telling people how to wear masks the correct way—over both the nose and mouth! I’m flabbergasted that people would still need that admonition almost two years in, so I applaud the Pasadena Playhouse for breaking it down for them. (And those notes are on tables in the lobby with masks and gloves for anyone who needs them, to boot.)

Lastly, Marc wanted me to be sure and tell you to “Go-Go to the Pasadena Playhouse!” Done.