Trending
You are at:Home»THEATRE»THEATRE: HARMONY
By Karen Salkin on March 18, 2014 · THEATRE

First let me put this disclaimer on my review of Harmony at downtown LA’s Ahmanson Theatre: I don’t ever want to see a musical that includes Nazis, unless it’s Springtime for Hitler.

But, as is my usual policy, I didn’t research the topic beforehand. I still didn’t even realize where this real-life story was headed until near the end of the very long first act.

So I can’t quarrel with the story itself because it’s a true, and interesting, one. And as much is I can’t bear to see anything about Nazi Germany, any tale that reminds the public about what my people went through at that time is all right by me. 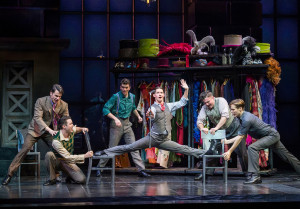 While I applaud the extreme efforts made by the entire production team to tell the long-lost story of the musical German sextet, the Comedian Harmonists, I just feel there has to be a better, shorter way to do it.

It wasn’t my cup of tea, although the opening-night audience did give it a standing ovation at the end. And my friend Maria was very impressed with all the singing voices, especially the lead, Shayne Kennon, who played Rabbi.

I honestly had no idea what was going on until halfway through the first act. I think they really need to make it much clearer from the beginning. My assumption is that they wanted to open with a musical number to grab the audience’s attention, and then go backwards to tell the story, which is an oft-used theatrical device. But in this case, it just confused me.

You could tell that the music itself is excellent, and why wouldn’t it be? It’s composed by none other than Barry Manilow. But, that being said, there are no tunes that caught my ear, nor even pieces of any which ran through my mind over the days since the opening, which is what usually does happen with new musicals.

But I think the main problems with the show stem from the book of the musical. (Book and lyrics are by Bruce Sussman, whose long history of work with Mr. Manilow has usually been stellar.) While the lyrics are fine, there’s just something amiss about the action and dialogue. It’s a story that’s worth telling. But the first half is too patly bouncy while the drama with the Nazis in the second half is too patly depressing. When, at the end, the Rabbi character tells us, (in a maudlin tone, no less) when they each died, I couldn’t even really be sad about it; of course they had all died–they were famous in the 1930s, for Pete’s sake! Some of them lived into their nineties! It wasn’t some horrible concentration camp story. (Actually, thank goodness for that.) 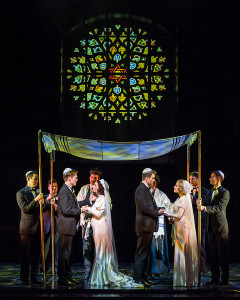 The best part to me was the very movable Tobin Ost-designed set, which worked perfectly, on every level. I missed it during the opening number because the head of the guy in front of me took up the whole stage from my vantage point, so when I moved to an empty seat to the side of me, I was wowed by how great the set looked. And it so easily morphed from a train station to a theatre to a bedroom, etc., that it did its best to keep the action flowing.

So, here’s my final word on Harmony: it’s not dreadful; rather it’s just nothing special. And it drags a lot. But it might be worth seeing, if only for the excellent voices, and to be aware of a true story from this tragic chapter in history.

And, at the very least, if you ever meet the iconic Barry Manilow, you’ll have something to talk about that I’m sure is really dear to his heart.