Trending
You are at:Home»THEATRE»THEATRE: HADESTOWN
By Karen Salkin on May 2, 2022 · THEATRE

As a fan of Broadway musicals that are mainly comedies, and as also a despiser of mythology, I expected to dislike Hadestown. Actually, I was sure of it. But let me tell you, this show, playing now at the Ahmanson Theatre, is fabulous!

And we in Southern California are lucky enough to get to see yet another hit Broadway show without flying to the Big Apple. I so appreciate that privilege.

Photo by T Charles Erickson, as is the one at the top of this review.

Even if I didn’t know the backstory of the entire fifteen-year journey of Hadestown, from inception to becoming a multiple Tony award winner, I could tell that a lot of work went into the production of it. A lot. There are so many aspects to it, and absolutely every little thing comes together for one of the most polished, tightest presentations I’ve ever seen. (Yes, it is basically a depressing story. But you leave the theatre feeling that you were just wildly entertained.)

Ever since Hadestown received that abundance of Tonys a few years ago, I’ve heard people rave about it. But I couldn’t figure-out just what the topic was because even the word “Hades” gives me the willies. I knew it had something to do with mythology, but that is one of the very few categories in life that automatically puts my mind to sleep, so I didn’t delve into it. (On the other hand, I have a friend who’s a nerd for mythology, and a fan of musicals; ergo, this is her favorite show.)

So now that I didn’t do it, I cannot recommend enough that you research the plot before you go; it will help immensely. You know that I never do that, because I always want to experience a tale for myself, but I had no idea what was going on for almost the entire first half of the show! I looked it up when I got home, and realized I should have done so before I saw it. (So now I may have to see it again, just so I can say, “Aha.”)

But I also suggest that, unless you’re a major fan of that genre, don’t worry about the actual story; just enjoy the incredible music, voices, and performances of Hadestown.

The entire cast is so talented. They don’t seem like a touring company at all. (Many touring companies are excellent, but often they just don’t have the same panache or excitement as the Broadway troupe. But this one has it all, from the second the actors and musicians take the stage.)

Yes, the musicians are on stage the entire time; they’re a major part of the show, which really adds to the semi-festive atmosphere, despite the uber-depressing scenario. And the music is glorious! At times, I felt like I was living a great day at a gospel church in New Orleans, during Mardi Gras, to boot. (My friend, Lyndsey, who also had no idea what to expect, said almost the same thing on the way home. Actually, probably everyone who sees Hadestown feels that way.) And I love me some accordion, which one of the “Fates” plays from time-to-time. 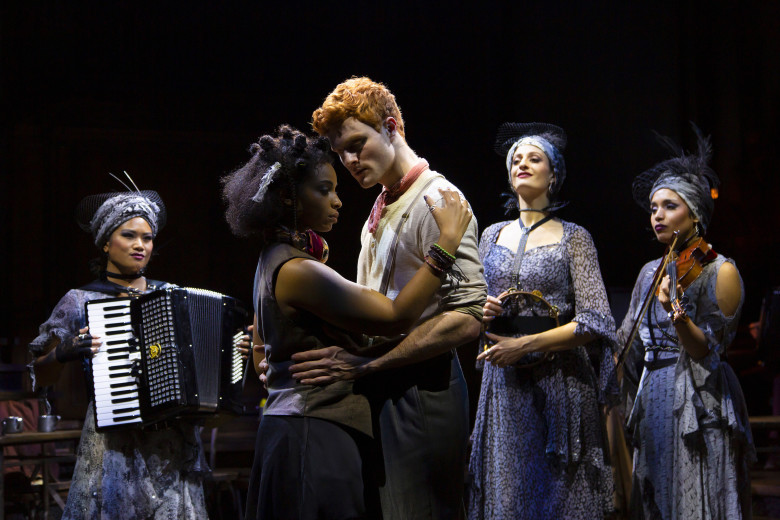 Note the accodion on the left. Photo by T Charles Erickson.

Good thing the music is so excellent because—guess what?–Hadestown is all music, with no (or little) actual dialogue, so you really have to pay attention to understand the entire narrative. And, from what I understand from all my Broadway-centric friends, the score is comprised of songs that singers of all ilks love to sing. (I wouldn’t know myself because I can’t sing at all. If forced, my two big numbers are Take Back Your Mink from Guys and Dolls, which is not exactly what I’d call “singing,” and Willy Wonka’s Pure Imagination, which I perform as a Miss America contestant. Don’t ask.) 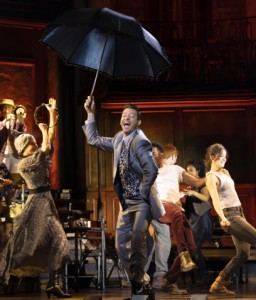 Every member of this company is spot-on; it’s one phenomenal voice after the other. But there are two stand-outs for me.

First is Levi Kreis, who plays Hermes, the Master of Ceremonies of this tale. I’ve known who he is since he won a Tony award for Million Dollar Quartet a dozen years ago, because, when accepting his award, he made a thoughtful statement which impressed me. He thanked someone for “…making me more available to my good.” I love that. I only wish that someone would do that for me! (Don’t we all wish that for ourselves?)

My other Hadestown stand-out is Kevyn Morrow, who plays Hades himself. He’s the only one whose every single word I could understand! (Probably in any show ever!) I don’t remember having ever heard such a clear stage voice before. On top of that, he actually gave me the creeps, which is exactly what his character is supposed to do. 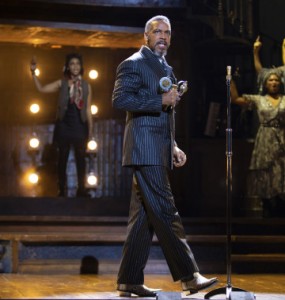 Adding to the festivities are a Greek “chorus” of singers who all dance great. When they started almost krumping, I was sad that the krump-dancing Mr. X had sat this one out.

The only part of the show I was not into is the costumes. I’m sure they go with the story, but I never like seeing anybody look so slipshod, not even on stage. (Hermes and Hades looked great, though. Maybe one’s character’s name has to begin with an “H” to get nattily attired.)

The many clever touches to the tale made up for the wardrobe weakness, though. And it’s all performed on one beautiful, utilitarian set, which morphs into something dark and dungeon-esque when necessary.

Yes, as you may have heard, Hadestown is a tad too lengthy, but it really does move right along. However, I advise you to be prepared for the ending.  Mythology is never happy, so keep that in mind. The opening night audience, as a whole, gasped at the sad ending, and I laughed when someone called-out a loud, “Oh no!” Even my mythology-eschewing self knew that that sadness is inevitable.

But to bring the room up a taste, during the curtain call, after they bowed, the cast sang a song about raising a glass, (or something to that effect,) and everybody left in an upbeat mood. A great show will do that for you.