Trending
You are at:Home»THEATRE»THEATRE: GOOD BOYS
By Karen Salkin on July 2, 2019 · THEATRE

Good Boys at the Pasadena Playhouse is one of the few plays I’ve ever seen that’s populated by people from TV series I actually watch! Betsy Brandt from Life In Pieces is the star, it’s written by Roberto Aguirre-Sacasa who created Riverdale, and it features James Carpinello from The Enemy Within and cute entertainment business newbie Ben Ahlers from The Village. (But, sadly, only Roberto’s project made it out of this season alive. Well, not sadly for him!)  And let’s not forget Toks Olagundoye from the also-defunct Castle. (Are you getting the idea that I’m strictly a network kind of gal?)

It was lovely that so many of their TV cast-mates showed-up on opening night to support them. (In case you’re curious, I spied Madchen Amick from Riverdale, Angelique Cabral and Holly J. Barrett from Life In Pieces, and The Village’s Daren Kagasoff and Grace Van Dien, who’s even more beautiful in person.) 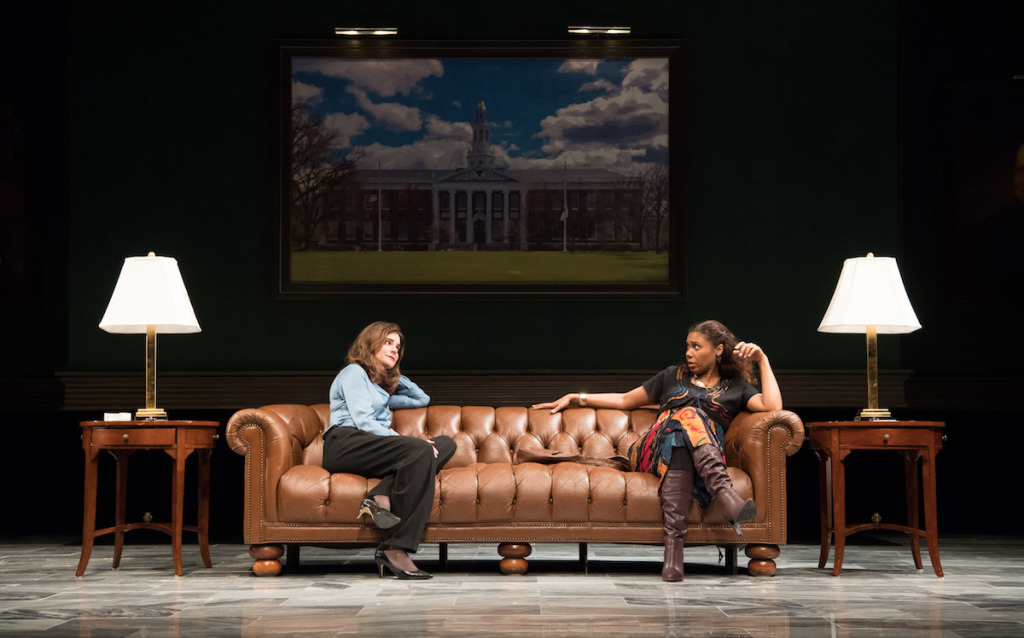 Betsy Brandt and Toks Olagundoye. Photo by Jenny Graham, as is the one at the top of this page.

Because of the pedigree of the playwright, and my being familiar with so many of the players, I expected to love Good Boys. I wanted to love it. But, sadly, I did not.

I thought the production was good enough overall, but as I read the notes I had written during the presentation, I realized that there are very few positive ones. (But there are some.) So let’s get into it all, in no particular order.

The entire presentation was very low energy on opening night. Everything about Good Boys needs to be tightened-up a bit—much of the acting, the story itself, and especially the direction by Carolyn Cantor; the whole thing cries-out to be much more dynamic. And all of the actors really need to cease pausing at every period at the end of a sentence! Nobody talks like that in real life! Even the set and costume designs did nothing for me.

I had already written the note that this seemed sort-of like a rehearsal, like it wasn’t quite ready yet. And then as we were exiting the theatre, the young guy behind me said the same thing to the woman he was with. (I love when my own thoughts are confirmed by others!) 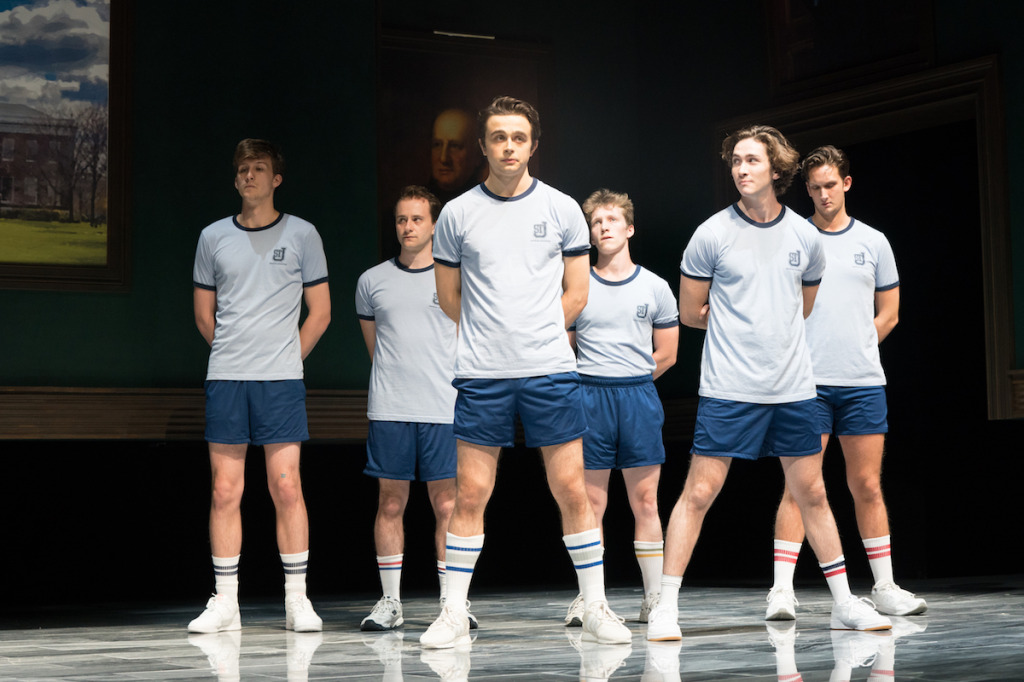 Speaking of similar thoughts, this is how Charles Isherwood of the New York Times reviewed the 2008 off-Broadway production, and, I’m sad to say, it totally applies to this current one at the Pasadena Playhouse, as well: “ ‘Good Boys and True,’ about a scandal at a prep school, is a standard-issue issue play written by Roberto Aguirre-Sacasa and acted competently by a likable cast. The brouhaha in question, unfortunately, is likely to inspire more stifled yawns than furrowed brows or raised consciousnesses.”

So, for once, I must tell you a bit of the topic of this play. Good Boys is basically about the fallout from the making of a sex tape by a privileged prep school boy. That’s really all you need to know.

This tale that’s predominantly of sexual harassment and molestation is always relevant, including right now with all the Hollywood scandals that have come to light in the past couple of years. But I feel this actual storyline would have been more jolting back in 1989, the year in which this play is set. Perhaps because of the way-too-many horrific date-rape headlines these days, along with teens and millennials posting almost-pornographic images of themselves all over social media on a daily basis, this scenario does not have the impact today that the playwright seemed to be hoping for.

But this subject, real or fictional, is always disturbing.

And that’s what makes Good Boys a drama, despite containing a good dose of humor. But when I read the official description of it when I got home, I was shocked to discover that it’s being billed as a thriller!!! Wha-at?! It’s not even close! I would have been so disappointed if that’s what I had been expecting. (It’s not even much of a mystery–I figured-out the tiny drop of puzzlement within a few minutes of the core of the plot being unveiled.) 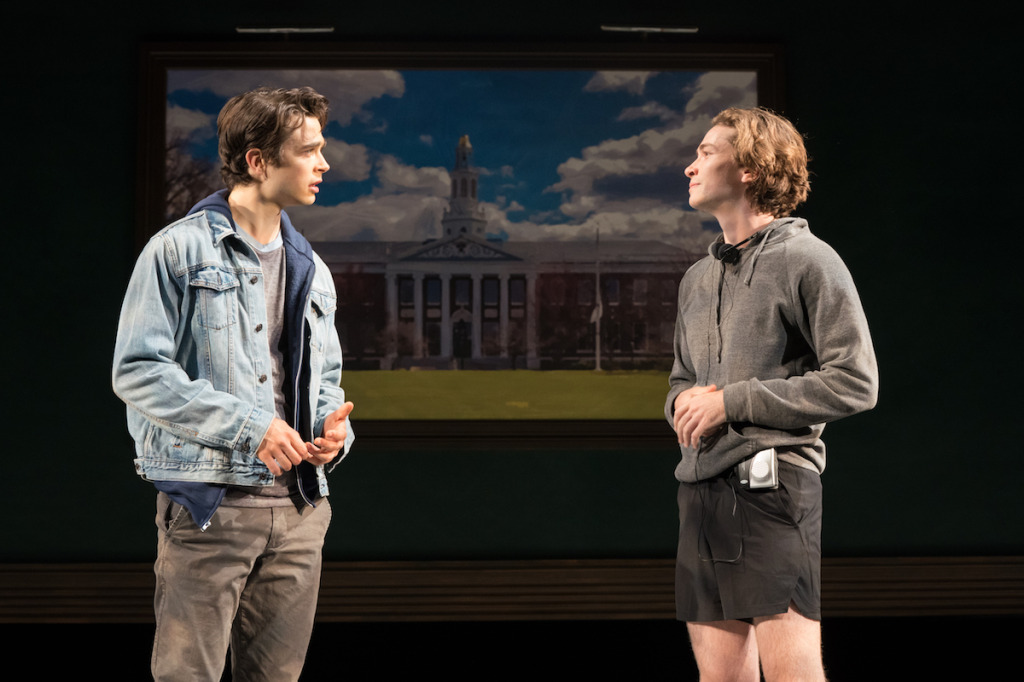 The narrative does start getting a little crazy in the second half, with several characters sharing his or her own account of an abhorrent high school sexual assault. It becomes almost like all the TV competitions nowadays, which you cannot win without a sob story. Except these are all horror stories.

There is one thing I loved about this show. Really loved. The abs on the two college-bound guys! (Maybe that’s why I wasn’t seated in the front row–because the powers-that-be were worried I’d rush the stage.) The definition on Ben Ehler is amazing! His abs are so good they look fake! (But believe me—they are not. Thanks, binoculars!) I’m so glad they included that near-nakedness in the locker room scene, (which could have been much longer, as far as I’m concerned,) even though it’s totally gratuitous. (But no worries about my appreciation of those muscles—the young men are not really teen-agers.) 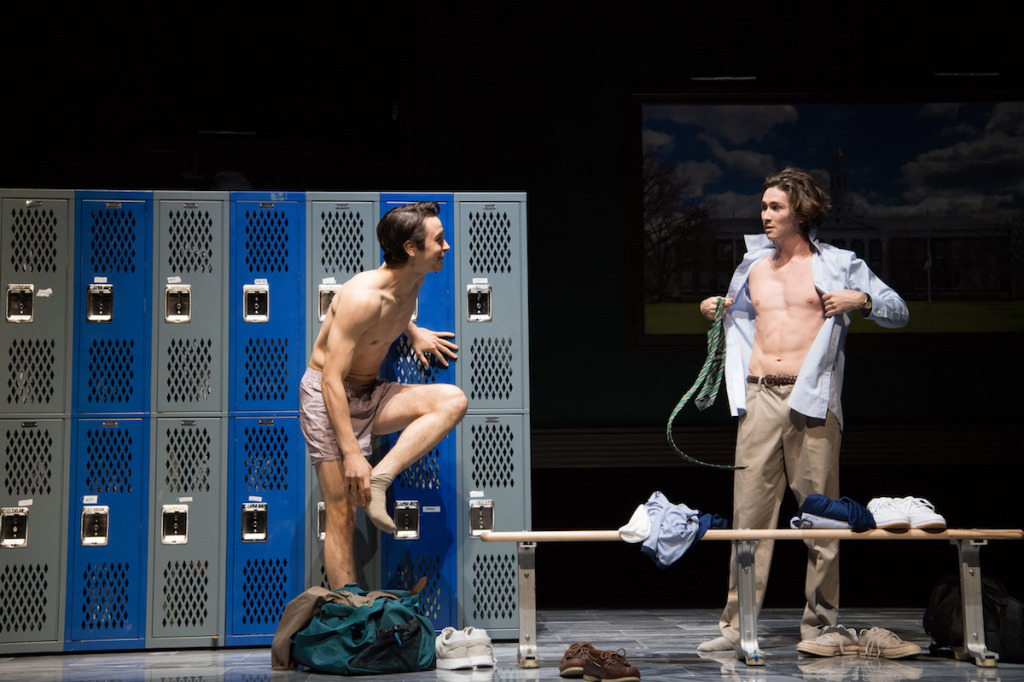 As I heard another audience member say that night, all the actors are adequate, but this difficult saga needed so much more. For me, (and I promise–not because of the abs,) Ben Ehlers as the entitled tape-maker, and Dylan Arnold as his admittedly-gay friend, come off the best. There’s just something about Dylan’s performance that seems so easy and genuine.

There is an aspect of this production that had never happened for me before at this iconic theatre; either all of a sudden the Playhouse has terrible acoustics, or the actors weren’t miked, or they just didn’t speak to the back wall. I’m known to have bionic hearing, (so don’t discuss your secrets within a hundred feet of me,) but I couldn’t make-out much of the dialogue. We sat towards the back of the theatre, (which I had never done before, so I have nothing to compare it to,) so that might be the culprit. In the first half, I could barely hear or understand Brett Cooper, the actress who plays the girl in the tape in question, at all. But someone backstage must have told her to project in the second act because she really hit all the right notes then. And I think the reason that several of Betsy Brandt’s punchlines were so low-key is that she’s just used to doing television.

Okay, here’s a mini-spoiler alert: I love seeing a parent take responsibility for his or her child’s upbringing, which the mother character seems to do at the end. (But the writing really needs to let us in on if she helps the girl out or not. The story is revealed but not resolved.)

That action reminded me of something Peyton Manning did in real life. Acknowledging the evil that your son has done to another human being is what his mother should have done. (I’m sure most of you are unaware of the sexual harassment the quarterback perpetrated on a female trainer in college, which his family helped him get away with, so if you’re curious, you can learn about it here:  itsnotaboutme.tv/news/footballkarens-rant-peyton-manning-scandal.) 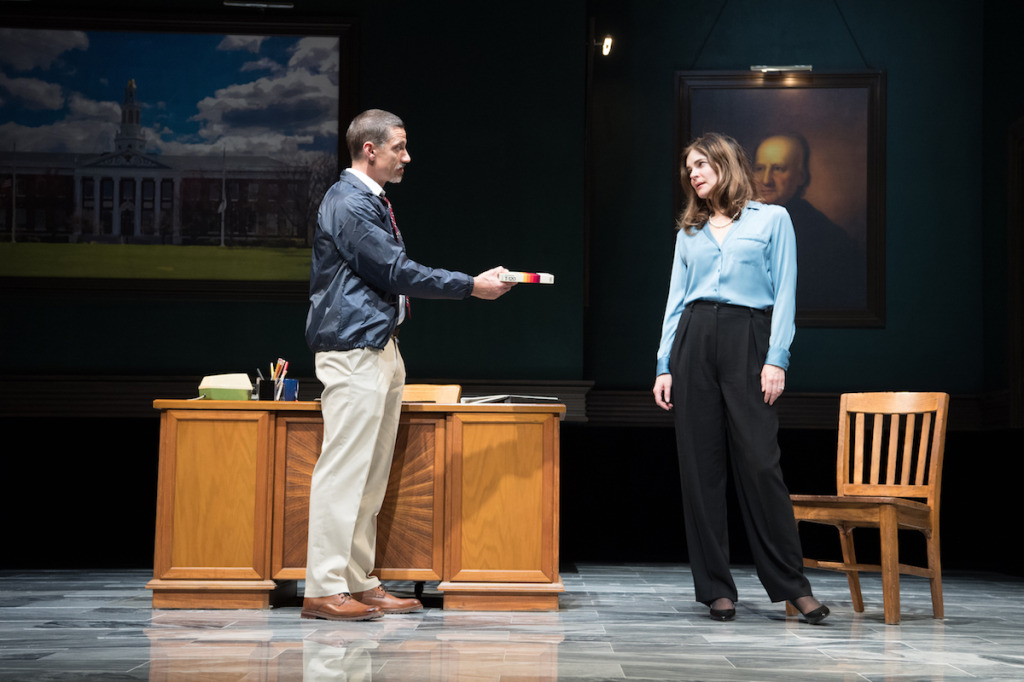 To wrap-up, despite my issues with much of it, Good Boys is still worth seeing. First of all, any trip to the Pasadena Playhouse is a worthwhile one. I love that place! And though it’s far from the most riveting story I’ve ever seen, and the performances need to percolate quite a bit more, if you’re a fan of seeing TV actors work right in front of your eyes, this could be the theatre experience for you. (And perhaps some more of their TV pals will even stop by to support them doing the run.)

I just advise you to keep your hopes in check. Here’s the thing about expectations: our low ones are usually exceeded, while our high ones almost always result in disappointment. So my own very high ones may be why this show didn’t quite cut it for me. And now that I’ve lowered yours, you will almost surely enjoy Good Boys more than I did.