Trending
You are at:Home»THEATRE»THEATRE: GATHER: SURPRISING STORIES & OTHER MISCHIEF
By Karen Salkin on June 4, 2019 · THEATRE

This is a different kind of production. And venue. Gather is an evening of very old-timey stories presented by a troupe of high-energy actors, (including one famous guy,) in the intimate Carrie Hamilton Theater upstairs at the Pasadena Playhouse, with just a bare floor as the performance area. And a man who starts-out reading a script on the stage, front and center, and then gets up, takes a seat in the audience, and calls out the titles of the stories from there! As I said—a different kind of evening. (And I do not get the title, unless it means “gather ’round to hear these stories.” They should say that’s it even if it isn’t.) 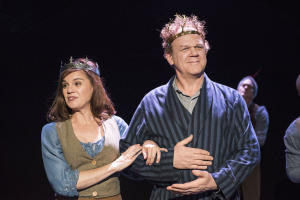 Amie Farrell and John C. Reilly. Photo by Nick Agro, as is the big one at the top of this page.

But it is interesting, on several levels.

First of all, I’m sure that movie fans will be keen to see comic actor John C. Reilly in person. And close-up, to boot!  And not as his usual comedy-star self. (These are not amusing tales.  More on the genre in a second.) I almost didn’t recognize him without Will Ferrell by his side. And he is thinner than I thought. And taller. So there’s that.

I loved the music, by Logan Hone, whose clever credit in the program is “One-Man Band.” It was my favorite part of the entire presentation, and my friend Roz echoed my sentiments. The music, (which is usually interstitial, as opposed to true ditties,) coupled with the fabulous sound effects, makes the show, in my opinion. 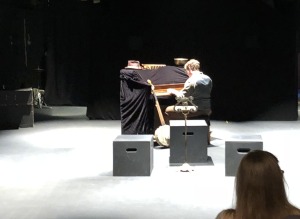 The empty-ish set, with Logen Hone entertaining the crowd as they get seated. (The piano et al gets moved back and out of the way when the show begins.) Photo by Karen Salkin.

The set, which is just a big blank floor, is perfect for John to do “activities” in. (Fans of the movie Step Brothers know of what I speak. Mr. X quotes it all the time! He even begged me to clear out a specific space in our house so it would be perfect for activities. Which it now is. And he has that movie to thank for me getting that task done.) 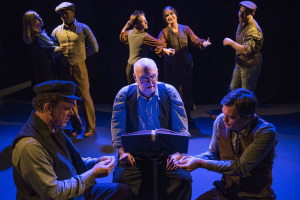 The man who reads this part, then sits in the audience, is in the center. Photo by Nick Agro.

I could make-out only about half of the titles the man called-out, and the only name I recognized is The Bremen Town Musicians, (whose official title is Town Musicians of Bremen.)  Brother and Sister is the only other one I could find on the internet. They also do one called The Magic Tree. Then there’s another story called The Devil, Death, and Samuel Green. Delightful. Now I know why these folk tales are so obscure—no one wants to hear them! 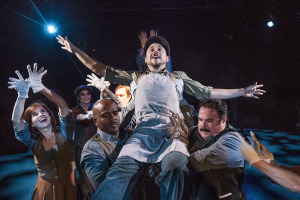 The cast. Photo by Nick Agro.

Since The Bremen Town Musicians is the first one presented, and it features the cast amusingly portraying animals, I thought this is a theatre piece that is more for children than grown-ups. But then the rest of the narratives turn dark really quickly. So I have to advise you to not bring children to this show that features Death not once but twice, and people getting chopped-up, and many mentions of blood, and someone even getting tied up in a sack and sent to his demise…while still alive! Gather has way too much violence for kids, (and for me, too,) even though it’s just described horror, with no blood displayed. (Thank goodness there are few props.) Roz and I both said that we would have had nightmares if we had seen these yarns as kids. And as a former elementary school teacher, I advise that many children will react the same way. These are not your Disney fairytales!  (But they are your grandfather’s. Actually, your great-great-great-grandfather’s!)

But that’s how folklore was written back in the day, with so much brutality, (even though one good character or another often undoes the evil.) Maybe that’s why there have been so many crazies and miscreants and serial killers through the ages. 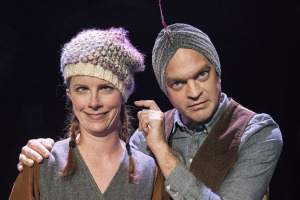 In addition to John C. Reilly, Gather features eight other talented actors, who appear to be really into this kind of performing. Since John’s the one who put this together, (with creative partner, and this show’s director, Patrick Murphy,) it’s nice of him to have chosen all non-famous actors to round-out the cast. And these people are not shy about throwing themselves into each character, complete with weird facial contortions and complex body movements, which I wholeheartedly applaud them for.

And I have to give John credit for not making it about himself when he’s probably the reason people want to attend Gather to begin with; to see him work in person. [Note: When I researched him after, I was wowed to discover his prolific body of work! I know him from only Chicago and the aforementioned Step Brothers, even though I’ve seen about half the movies he’s appeared in! I never even knew he’s been in more dramas than comedies!] 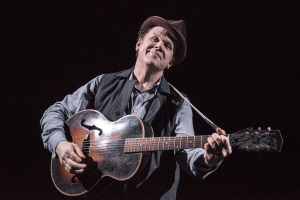 I have to say that John seems like a nice guy. That observation was solidified for me when I noticed the last line of his bio in the program for Gather. It reads, “He has been acknowledged by the Academy, the Tonys, the Grammys, and the Golden Globes, but he is most honored by your presence here tonight.” I love that, (even though he’s perhaps a tad nutty if he means it.)

And here’s one weird note. (Like all of my reviews are not somewhat wacky to begin with?!) I was actually impressed that most of their shoes are so quiet. One woman’s boots could not even be heard on that floor at all! They must have had great rubbery cushioning.  I give major kudos to the Costume Designer, Ann Closs Farley, for that. Perhaps she’s the person responsible for one visual that awed me, as well; one of the women does a silver bird with her gloved hands, which is just beautiful. 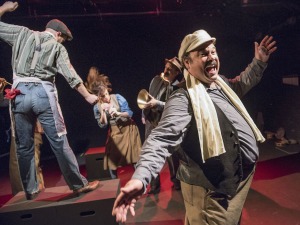 So, if you want to see a movie star do something other than what you’re used to seeing him do, really up-close and personal, and even hear him sing an old-fashioned troubadour-esque tune or two, and want to learn about these fables without reading them for yourself, and want an evening at the theatre that you don’t need to get dressed-up for, and do not mind gory old tales, and are over fifteen, this ninety-minute, intermission-less show just might be the one for you.