Trending
You are at:Home»THEATRE»THEATRE: FIDDLER ON THE ROOF
By Karen Salkin on February 17, 2012 · THEATRE

FIDDLER ON THE ROOF

Those of you who are regular readers of my theatre reviews are aware that I’m a new-ish fan of the Glendale Centre Theatre, which has the distinction of being the longest continually-running theatre in the country. As a matter of fact, I just realized that if I had kids in this city, I would take them to see all the shows there to get a wonderful Broadway education. I think Los Angeles is very lucky to have them in our midst.

And, every young person should see this particular show to realize how lucky we all are to live in these times, even with all the modern-day problems, which are still better than those. 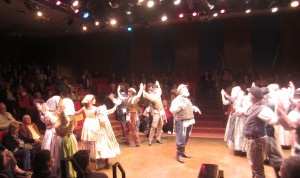 The truth is that I’ve never been a fan of Fiddler On The Roof, perhaps because I’ve been to a couple of weddings like this. Or because, when they’re group dancing, I feel like I’m back on the Chabad Telethon. (I used to be one of the celebrities on it every year, until I got fed-up with the men pushing us females off the stage when we’re all dancing at the end.) I can’t quite put my finger on it.

But, a friend was here from New York, and she loves the show, and since I always want to be good to my pals, I said let’s go. I wasn’t looking forward to it, but I’m glad I went because the production definitely lived-up to the excellence we’ve come to expect from this company.

For those few of you who don’t know anything about Fiddler On The Roof, it’s the story of a basic poor Jewish family in 1905 Russia. (As a matter of fact, it was a good thing I wasn’t late—the way that I looked that night, the rest of the audience would have thought I was in the show!!!) But it’s not really depressing; it’s mostly humorous.

The main couple has five daughters, and the story focuses on the love issues of the three oldest. Some of it is what several of my friends go through today! As a matter of fact, watching it made me feel like I was back in my mother’s neighborhood in Brooklyn! But, even as Jewish girl growing up there, I had few dating restrictions put on me by my normal parents, so it’s hard for me to watch others in that position, even in a fictional story.

[Note: okay, there was one exception back then–when I was really young, my posse and I had to tell our parents that all the Italian boys we dated had Jewish mothers! I just found-out this week that in one case, it was actually true!]

I really had forgotten just how much wonderful music there is in Fiddler. Just about every song is famous and beautiful. And this giant cast having mainly wonderful voices just added to the musical enjoyment.

Tevye and his wife Golde. Photo by Nathan Milisavljevich.

Richard Malmos, who plays Tevye, is charming. Not that it’s a contest, but he’s so much better than the guy who played Scrooge in December. So, score one for my team!

And my friends and I loved the voice of Tyler Milliron, who plays the young Russian soldier who’s in love with one of the daughters. It’s gorgeous! (He’s pretty cute himself.)

The staging in this indoor theatre-in-the-round, (well, it’s a square really,) was as impeccable as ever, especially the major dream scene in Act I. When we sat down near the bare stage, one of my pals asked where the set was! I told her that the actors bring the pieces in with them, and she raised an eyebrow. But, when they first did it, she was really impressed.

As with all the musicals they produce here, there was a modicum of dancing, and as a former dancer myself, I have to admit that it always does bother me a little bit that these singers are not also dancers. But, in the case of Fiddler, that almost no one had dance talent actually lent authenticity to the show. Trust me, the religious Jewish people dance like this at every major function, and almost always look like these actors did. So, it’s perfect, and it would be ruined if they stylized the numbers.

There’s one exception here: I was glad to see that Daron O’Donnell, who played the youngest daughter, Chava, can dance because she can’t sing. At all! But at least she has the correct look, and has a good little dance number, where you can tell by her hand position that she can dance.

So, this show had beautiful music, excellent staging, a strong lead in Tevye, authentic costumes, good voices, and lots of charm.

The only real weakness, which I always hate pointing out, was Osa Danam as Yente, the Matchmaker; she played it like she was doing a high school play. You know the routine—there’s no real acting involved, only mugging, which I hate.

My only other slightly negative note is that the cast mispronounced “L’chaim!!!” Such a basic and important Hebrew word! They need to rectify that right away because it takes the people in the know out of the moment.

A couple of notes on the actual theatre, which I love. First, in regards to my always telling you how freezing this lovely theatre is, in order to keep the usually bundled-up cast cool: dress in layers because this time it was actually hot in there. And the actors were more bundled than ever! So, I can’t figure out he temperature sitch over there. Also, this was the third set of different seats I’ve been in and I can tell you–they’re all good!

There was one tiny problem on opening night, however, which happens in all theatres, unfortunately: someone was wearing horrible, strong perfume! I always try to remind people to not wear fragrances to the theatre, because you don’t want to make the experience unpleasant for the person sitting next to you, but this time I think it was one of the actors, and because it’s such an intimate space, it wafted up to the seats. We didn’t know for sure, but we smelled it only when Yente appeared. Perhaps it was a character choice. But I almost had an asthma attack. I thought I was going to have to leave the theatre, but when she exited, so did the aroma. It didn’t come back until later, when she re-entered, so we deduced it must be on her. Or her costume.

So, to actors and audience members alike, please no fragrances in such confined public spaces!!! It’s just rude.

But other than that, you should do yourself, and your children, a favor and go see this show. And then marry anyone you want!

Fiddler On The Roof running through March 24, 2012