What perfect timing for this play at DTLA’s Mark Taper Forum! Direct from his triumph as Christopher Darden in that recent mini-series about the OJ Simpson trial, Sterling K. Brown stars here in Father Comes Home From The Wars (Parts 1, 2 & 3.) 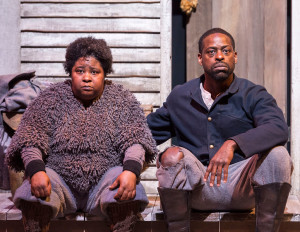 During that TV show, I actually kept thinking that he was Chris! He was that good. But here’s what an excellent actor Sterling is—I forgot all about that portrayal as I was watching him perform in this play. I have a feeling we’ll be seeing him in a lot more projects pretty soon.

But, alas, apart from his excellent performance in Father Comes Home From The Wars, there are so many problems with this play that I don’t even know where to begin! (And I feel that anyone who tells you otherwise is just Emperor’s New Clothes-ing it.)

It may wind-up being your cup of tea, but it certainly turned-out to not be mine. I have no squabble with any of the acting. That’s the only good part, especially Larry Powell as Homer, who’s adorable, and made us all laugh with just about every line of his.

And, even though I’m not a fan of stories having to do with the Civil War, in general, I usually do find them interesting. My entire beef is with the writing, (and also with the bizarre execution, which features lots of weird little touches, that may have been in the directing of the piece.) I know that playwright Suzan-Lori Parks has won a Pulitzer Prize before, but it definitely was not be for this strange one.

I can sum up those very long three hours in just three words: slow, wordy, disjointed. 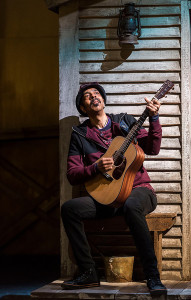 My very first note of the evening was a positive one. I wrote, “Go early for the wonderful blues guitar that’s being played as the audience enters.” Steven Bargonetti performs it throughout the show, but it’s especially wonderful arrival music. It put me in a good mood right away on opening night. But that quickly dissipated, and got slowly and progressively worse as all the strange bits began happening.

My second note was a short one, about a totally erroneous bit of wardrobe, but, as the evening wore on…and on, it just got worse in that category.  By the end, I had copious notes about that same subject, so I’m condensing them into one big complaint here.  There are so many instances of it that I realize that it may have been a conscious choice, albeit a mind-boggling one.  I was so distracted right from the start by that oh-so-wrong wardrobe that it was hard to pay attention to what the actors were saying rather than wearing! 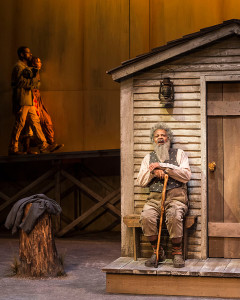 Roger Robinson. Notice the modern garden shoes on him, which triggered my distraction. Photo by Craig Schwartz.

Here are just a few examples of the clothing that’s seen on-stage at the Taper, but definitely was not around in 1862!: rubber “garden shoes” on the Old Man, the girl wearing a hip modern shirt…and a bra (whose straps were showing, I believe on purpose,) many of the men rocking new-looking Converse sneakers, a jacket with a zipper, (but it is on a talking dog, so nothing strange there, right?,) and the most egregious one of all–a fanny pack!  A fanny pack! That was the last straw for me.

Aside from the costumes, there are also several actions that are wrong for the 1860s, including many of the physical gestures, the main dude dancing the Roger Rabbit, the characters saying, “True dat” multiple times, (which no one even said in the 1990s!,) and one of them ending a statement with “…Not!”

There are just way too many confusing things for me to have enjoyed the show.  The “talking dog” (who shows up in the second act,) is great, as is Patrena Murray who plays her to a tee, giving a much-needed shot of adrenaline to the almost-snoozefest, but why is she there?  She just comes out of the blue to tell the people what’s been happening with her master in the war. She was lost at home before he went away, and then she shows up more than a year later and says she was at war with him? Huh?! That whole bit is just another weird anomaly. And why the sporadic talking to the audience by the characters? That device doesn’t go with along with anything else in the story.

And why the cutesy title? (i.e. Parts 1,2, and 3.) So not necessary. [I have a feeling it’s because there are more parts to come in this story, but why can’t the author just say that her next play with the same characters is “Part II?” Why will those scenes be labeled “Parts 4, 5, and 6,” and on and on? It’s just sort-of pretentious, if you ask me, (which you are, by reading this!)]

And while we’re on the appellation, the whole first act (which I’m assuming is “Part 1,”) is taken up with an uber-lengthy discussion of if the main character should go to war with his “master.” But guess what? There is no drama in it because any audience member with half a brain knows he is going to war—it’s right there in the title! He can’t “come home” from war if he doesn’t first go there! Duh! And he was never a father, so how did “father” come home? [I’m assuming having the plural “Wars” in there means it’s more than the country’s Civil War he’s fighting, but I’m still so exhausted from seeing the play that I don’t care to analyze it further.] 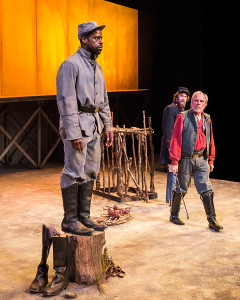 And, here’s a Spoiler Alert, so skip to two paragraphs down if you don’t want to know: One scene features a captured Union soldier, who, in a surprise twist, turns-out to be black. So, why wouldn’t they cast someone who looks even a modicum of African-American for the role? There are so many actors who would fit that bill! (Ones who look like Iggy Azalea, for instance. I absolutely cannot believe that girl is white. Or Wentworth Miller, who is black, but you can only see it a bit once you know.) Instead, they cast a big old Irish-looking dude with a ginger beard, and we’re supposed to believe he’s really black?! Puh-lease. (Josh Wingate is fine in the role; he just doesn’t physically fit the “surprise.”)

And, one more Spoiler Alert. (Sorry, but I just can’t help myself on this one): So, the end is that the guy we rooted for all along is an asshole?!  That’s the lesson of this super-long play???

Okay, it’s safe to come back now: I saw Father Comes Home From The Wars with my smartest, most literary-minded friend, who really wanted to see it, and even she was disappointed. At the end, she remarked that it’s “inconsistent.”  And she is so correct.  It’s all trying too hard. It’s too scattered and disjointed, with too many different techniques. It reminded me of that SNL skit where teen-agers do bad piecemeal theatre bits, thinking they are so profound, but the horrified faces on the audience members say it all. I have a feeling my visage had the same look on it more often than not that night at the Taper. 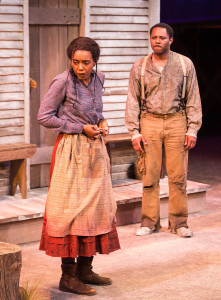 Here are two observations that are not of the play itself, but apropos: I’ve always wondered how anyone could have condoned slavery back then, but then I realized that I forgot that the people in the south in those days were as crazy as Trump is now!  I guess the problems are the same, and only the names have changed. Shame.

And, even in a play or movie, I can’t bear to hear the n-word.  I cringe every time it’s uttered. I’m not that good of an actress myself that I could ever say it, even in character.  I’d have to whisper it.  And apologize immediately. So, I guess it’s good that I wasn’t chosen to play Mark Fuhrman! (See how I circled back to the OJ trial?)

So, here are my final words on Father Comes Home From The Wars. You have to judge this one for yourselves. I didn’t hate it; it just annoyed the heck out of me. But, I always think it’s important to be reminded of the horrors of life back in the day, so that we can, hopefully, not repeat them, (even though we often do, in some from or another.) So, that might be the reason to see it. Just try to rise above all those strangenesses, which I, obviously, was not able to.