Trending
You are at:Home»THEATRE»THEATRE: FALSETTOS
By Karen Salkin on April 22, 2019 · THEATRE

This Jewish-themed musical is here in LA just in time for Passover.  That’s brilliant scheduling on someone’s part!

About two decades ago, a music producer pal and I saw Falsettos, (or at least part of it, which I’ll explain further along in this review,) elsewhere in town.  We both hated it so much that we tried to sneak-out at halftime, despite the fact that there was going to be a big opening night party!  So you know how much I really hated it!  (For the funny story about that attempt at stealth, plus a mini restaurant review and a big surprise, go to my new YouTube video right here:  www.youtube.com/watch?v=WICncVn0QGQ.)

So, when I became aware that the show was coming back to LA after all these years, (via the National Tour of the 2016 Broadway revival,) I was not one of the many people hopping on the Falsettos bandwagon.  But I love seeing anything at downtown LA’s Ahmanson Theatre, so off I went, with an intelligent worldly pal, JoAnne, who had never even heard of this show before, so I would also have the opinion of someone who was viewing it through virgin eyes. 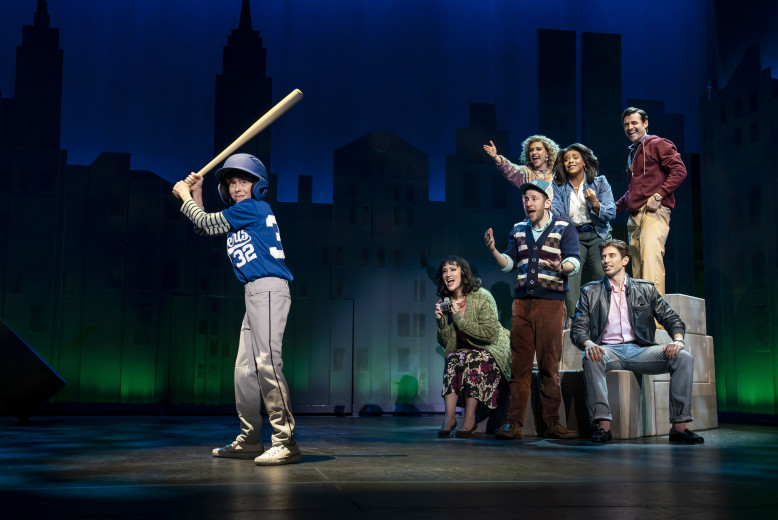 Photo by Joan Marcus, as is the one at the top of this page.

And my verdict this time is…I actually enjoyed it!  A lot.  Perhaps that’s because the show seemed so much better-directed than the original, even though co-book-writer, James Lapine, did the honors both times.  Or maybe I’ve just matured.  (Yeah, right, like that’s really a possibility!)

Since this is an all-singing show, (meaning no spoken dialogue,) the actors’ singing voices are of paramount importance.  And everyone comes through in that department.

Nick Blaemire, who plays the psychiatrist, has the best voice. I felt a sort-of peace whenever he sang.  And he was both of our favorite player, in general.  I wanted to hear Bryonha Marie Parham, (who plays one of the “lesbians next door,” along with Audrey Cardwell) really wail, which I could tell she can, but alas, this score does not allow for that.

What Would I Do, the very last number, a duet between Max von Essen and Nick Adams, who play the lovers, is very powerful. 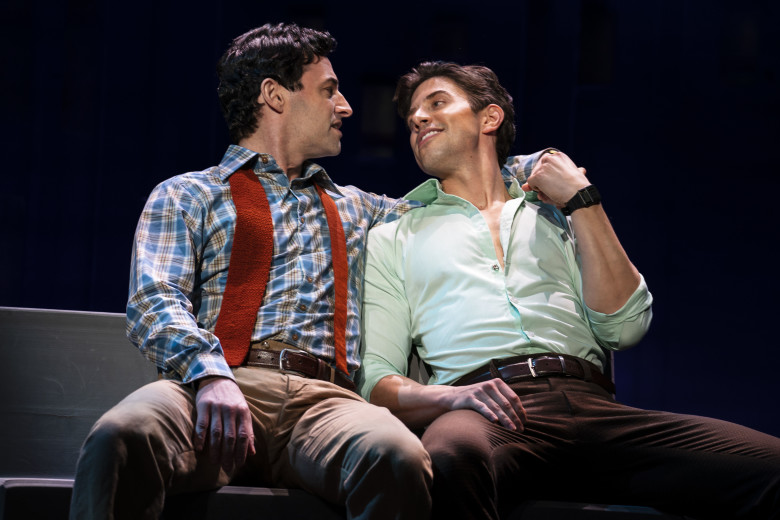 Thatcher Jacobs, (who performed the shared role of the young son on opening night,) more than holds his own among the grown-ups, which is far from always the case.  I was shocked to discover that this is his first major musical role; his performance is so mature and professional.  (And not the usual kid-actor-obnoxious, thank goodness.)

I’m assuming the big draw among the cast is Broadway’s Eden Espinso.  I don’t recall ever seeing or hearing her work before, though I have heard her name. (New York stars don’t usually translate to LA consciousness, except for the bi-coastal peeps.)  Her tour de force moment comes with I’m Breaking Down, which is the most defined, stand-alone number in the production. The opening night audience went nuts over her rendition of it.

The little dancing, or more accurately, movement, there is was cleverly-choreographed by Spencer Liff.  Those steps are very welcome whenever they happen. 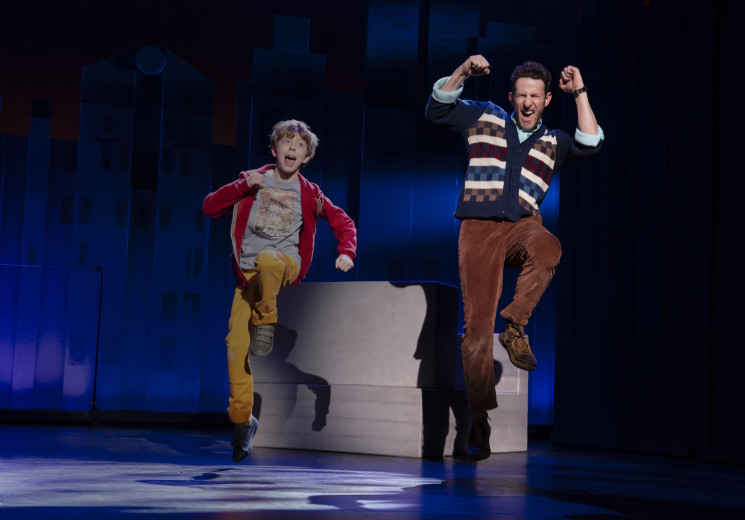 JoAnne went berserk over the very interesting simple-looking yet deceivingly-complicated set, which was designed by David Rockwell.  She could not stop raving about it!  Before the show begins, we see a lone giant gray cube in the middle of the stage, which then unfolds into a zillion different configurations during the action to convey many different locations.  I particularly admire that it becomes an entire living room!  And big kudos to the actors for being the ones to move it all so unobtrusively.

The opening of the second act revealed that the smallish, hip-looking band was above  the set, covered by part of the backdrop.  Including that info in a song is an inventive way to give the musicians their props.

Now that all my technical thoughts are out of the way, let’s discuss the script. Falsettos is surprisingly charming at times. It’s always hard for me to decipher narratives when there’s no actual dialogue, but since I knew the story going in, it was a bit easier this time. And the fact that I could make-out most of the lyrics really helped. (So, thanks to the cast for enunciating so well!)

Writing it was a lot of work, I’m sure.  I can’t even imagine it. One person, William Finn, wrote all the music and lyrics, which seems like a gargantuan task to me.  (The book of it was written with director James Lapine.) I fret over just writing these reviews! And there’s no music involved in them, (except for the Beatles’ Help, the refrain of which plays over and over in my mind every time I look at yet another blank page!) 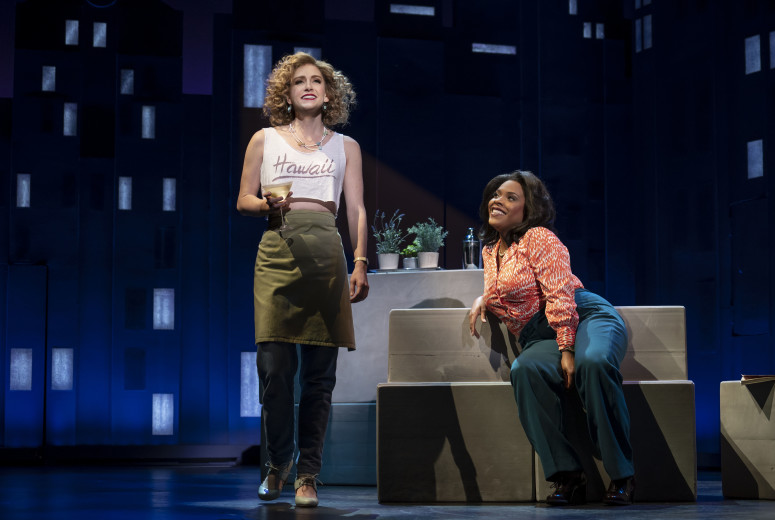 So here’s what I meant by “part of it” in the second paragraph above: The two halves are actually two different shows that were written a decade apart, by the same team I just mentioned. Act II is a continuation of the story from the the first half. A tad confusing, I know. Joanne didn’t know any of that, but she correctly felt that Act I was an entire show unto itself. She told me that she would have been much happier if it had ended there, without the depressing second half.

And the reason that it’s depressing is that one of the characters is dying from AIDS. It was actually somewhat weird to see a show about AIDS in 2019. I had pretty much moved my thoughts on that insidious disease, which occupied so many of our minds and hearts in the ‘80s and ‘90s, onto the back burner. I’m grateful that we’ve come so far in getting it under control.  (We’re still not even close to all there yet, but two years ago, the CDC’s Dr. Jonathan Mermin said, “Half of Americans with HIV now have the virus under control.” That’s a big step, even though so much more work is needed.)

With all the recent Magic Johnson sports news the week before the Falsettos opening night, I had even marveled that no one has talked about him being HIV-positive in decades! So seeing its horrors depicted up there on the Ahmanson stage made me, (and I’m sure many of my fellow audience members, judging by all the sniffles near the end,) remember so many people whom we lost to AIDS-related illnesses. That renewed sadness and anger made me go home and research the topic extensively. Any show that can encourage people to think outside of their own situations in life is more than an entertainment—it’s a service to humanity. 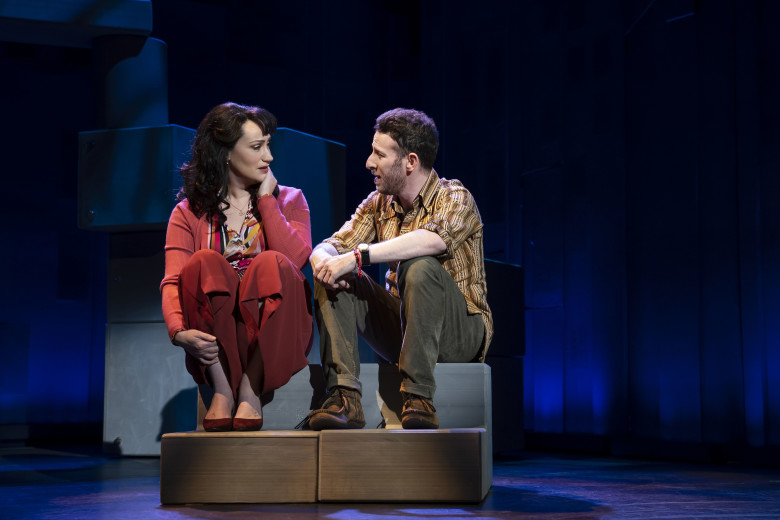 So now I feel shallow pointing-out the only two quarrels I have with Falsettos, but here goes. My general complaint is that it’s waaaay too long!  It’s well over two-and-half hours.  There’s so much that can be cut, from both acts.  Each little nuance of the tale does not need to be pounded home so many times!  Even my wind-bag self goes back over every column and removes some verbiage before publication, (which I’m sure is news to you.)  It’s called editing, people—this show needs to use that concept!  (Of course, since this is a pretty old show, I don’t know just who would be allowed to do the trimming of it, both now and in subsequent productions.  But, as Coco Chanel taught us—that we need to “look in the mirror” before we leave the house and “take one thing off”— that’s what the powers-that-be need to do with this show.)

And what I (and JoAnne) absolutely detested was the wardrobe.  At one point, echoing what I was already thinking to myself about the wife’s outfit, someone sitting near me asked their companion, “What the f**k is she wearing???” The character’s attire is not part of what defines her, so why would the costume designer, Jennifer Capri, make her look so dowdy?  I know this show is set in 1979 and 1991, but this is ridiculous.  We both found Eden’s outfits and bad wig (by Tom Watson) to be distracting.  (But at least they totally explain why her husband left her.  Just saying.’) 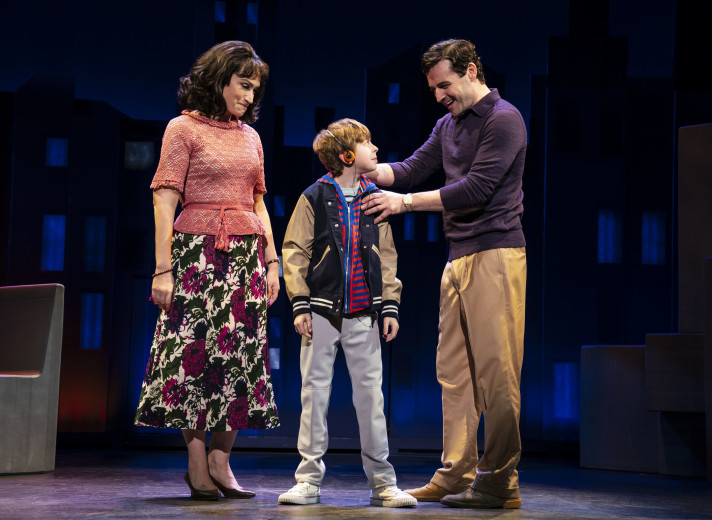 But guess what?  All of the costumes miss the mark!  On every character.  The kid is even dressed like a tribute to Sheldon on The Big Bang Theory.  They should have just asked me to do the wardrobe because I looked my most adorable in the ‘80s! (If I do say so myself.)

But wardrobe and length of show aside, seeing Falsettos is a very worthwhile experience. Besides the entertainment value, it reminds us of the brevity of life. And affirms what I always espouse–that we should all grab happiness when we find it, no matter with whom nor the circumstances. (Without breaking any laws, of course.) And that the definition of “family” is what you make of it.

So grab a loved one or pal, and some tissues, and go to the Ahmanson to see Falsettos. And maybe bring a matzoh or two to snack on.