Trending
You are at:Home»THEATRE»THEATRE: END OF THE RAINBOW
By Karen Salkin on March 22, 2013 · THEATRE

END OF THE RAINBOW

Tracie Bennett, playing Judy Garland, was so good in this role that I thought I was watching Daniel Day-Lewis! She’s another one of the very few people who were born for a role. (I discussed that very same thing earlier this week. If you missed it, you can read it here: www.itsnotaboutme.tv/news/2013/03/19/theatre-one-night-with-janis-joplin.) 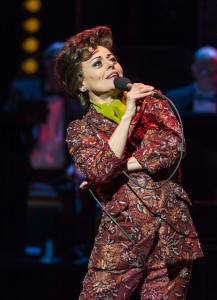 I was so disappointed when I missed End of the Rainbow in New York last year. My musician brother played in it, and I had hoped to see him, but just never got the chance.

So, I’m thrilled that it’s here in LA now, and that it was as fabulous as Judy Garland herself!

I have to say that it was sort-of hard to review the first act because of my horrible audience situation during it. I usually just accept whatever seats I’m given, and try to make the best of it. But my pal, Lucia, and I both had the misfortune of sitting behind the two biggest heads in existence! We couldn’t see around them at all, except for a tiny patch on the very side of the stage. We were both miserable; the heads took up the entire stage. We basically missed seeing the whole act; we just had to hear it, like a radio show!

On top of that, the guy next to her, who I really don’t think was an opening night invitee, started loudly opening crinkly packets of…corn nuts! And he kept pouring them directly into his mouth, (rather than placing them in there one at a time with his hand, which would have been more genteel,) releasing the smell of them in all their glory. The man on the the other side of me was nice enough, but he was the loudest clapper ever, rendering me just a tad deaf by the end of the first act. And, I had to practically put my head on his shoulder to see even a tiny bit of the stage, and whenever I did, he turned and stared at me. The whole experience was awful.

So, we were lucky enough to change seats after intermission, and boy—what a difference it made! We could see the beautiful stage, the musicians, and most importantly, of course, the actors! So, please all future audiences everywhere—a) don’t eat in the theatre, b) clap normally, and most importantly, c) when you know you’re super-tall and thick, please ask for seats in the back. When I was a teen-ager, my boyfriend had an afro, and I always asked to sit in the last row. If young girl can think to be that considerate, why can’t grown-ups?

Okay, back to the show, which we loved. Many of you know it’s about Judy Garland, but the interesting thing is it takes place in a period near the end of her life. (Hence, the “end” in the title!) I think that’s such a clever premise. Kudos to playwright Peter Quilter for thinking of it! (And to whoever came up with the great title!)

Obviously I never saw Ms. Garland in person, but on opening night of End of the Rainbow, I felt that I was doing so right then and there. Tracie Bennett is the very embodiment of her. Throughout my life, I’ve seen tons of television clips of Judy as a grown-up, and for all intents and purposed, Tracie is Judy Garland on that stage. She even had the same little tiny body!

This is a slight digression, but I have to discuss for a second how physically perfect she is for this role. She has that tiny stature, as Judy did, but she also has a very big head, (physically, not bragadociously, if that’s even a word,) which makes it easy for the audience to see her face! If her head matched her body, we wouldn’t have been able to make-out her facial expressions. (Trust me, as a girl with a peanut head, I know what I’m talking about in this area.) [Note: I have a feeling you won’t read this part of the review anywhere else.]

The role looked so exhausting that at the end, when my friend and I were lauding Ms. Bennett’s performance, I said, “Wait a second—she has to do that all again tomorrow night!” I really don’t see how that’s humanly possible! And she’s been doing it for years. I cannot even express how impressed I am. 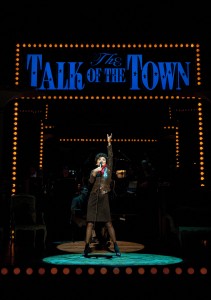 Here’s something weird (about the situation, not the show)—she got nominated for a Tony last year for this role, but as Best Actress in a Play, not a Musical! How could that be??? I guess they call it a play with music because it’s definitely not a musical in the traditional sense. It’s really a play with breaks of Judy doing her one-woman show in-between. It’s all her famous songs, like The Man That Got Away, and You Made Me Love You, but there’s no original music. And, she’s the only one singing. There are three other actors in it, but they don’t do anything musical. So, this was probably a hard case for the Tony committee.

Speaking of the music, I love that they had the musicians on stage, as I’m sure they were for Judy’s real shows. I love it when musicians actually get credit for the music they’re the ones creating!

Oh dear—I have to put in one more digression here. Many years ago, when Mr. X was doing a major musical in Toronto, (he got the role on Broadway, but couldn’t be released from his television series in time,) we decided to have a wonderful party on a boat for everyone involved in the show. With me being his social secretary, it fell to me to proffer the invites. So, I put a note on the backstage bulletin board with the deets, and asked everyone to RSVP to me by a certain date. Of course, the entire cast and crew accepted, but I had not heard from any of the musicians, either way. So, I went down to the pit one night, and asked them if they were coming. They all looked at each other quizzically, and one of them said to me, “We’re invited???” I said, “Of course!,” and asked why they would even think otherwise! They told me that, as professional Broadway musicians for many years, they had never once been included in cast activities! I was shocked, but, sadly, that same scenario has since been confirmed for me by many other musicians.

People in show business—wake-up! You can’t have a musical without the ones making the actual music! They’re the most valuable assets. So, please treat them right! 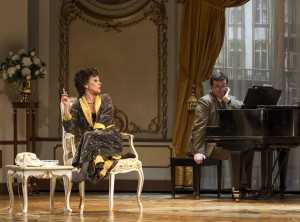 Photo of Tracie Bennett and Michael Cumpsty by Craig Schwartz.

Okay, got that one off my chest. So, back to my review of End of the Rainbow, although there’s not much more to say about it. It’s excellent all the way round. The three men play their parts exactly as necessary. The set works well, and really does look like an old London hotel. (Or what I imagine it to look like, since I’ve never stayed in one there.) The music is gorgeous, and played beautifully. The writing is witty and the story educational.

But the one and only reason that I say that everyone must see this show while they have the opportunity is the marvelous tour de force performance of Tracie Bennett. Everything she does is perfect. She’s got Judy Garland down pat—the hand gestures, the body movement, the speaking voice, the speech patterns, and best of all, the fabulous singing. This woman gives it her all, just like Judy did. I don’t know how that tiny (yet very in shape) body can sustain it all. This is one time I can truly use the word amazing.

And yes, she does sing Somewhere Over The Rainbow at the very end. Whew.