Trending
You are at:Home»THEATRE»THEATRE: ELLIOT, A SOLDIER’S FUGUE
By Karen Salkin on February 8, 2018 · THEATRE

This 2006 play is part of an exciting theatre event in LA right now. Elliot, A Soldier’s Fugue is the first offering in a trilogy of plays by Quiara Alegría Hudes that is running concurrently at three LA theatres.  (Water By the Spoonful opens at the Taper this week-end, and The Happiest Song Plays Last at LATC shortly after that.) Central to the them all is how the Iraq war impacts the fictional “Elliot,” whom the playwright based on two of her cousins. 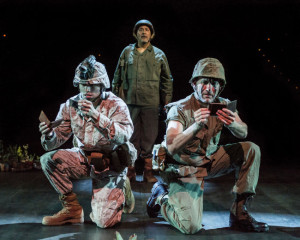 (L-R) Peter Mendoza, Rubén Garfias, and Jason Manuel Olazábal. Photo by Craig Schwartz, as is the big pic at the top of this page.

Elliot, A Soldier’s Fugue is the story of three generations of a Puerto Rican family whose men go to war–the Korean, Vietnam, and Iraq ones, to be exact.  (I’m far from an expert on the subject, but the seemingly endless military action in the Middle East has been going on way too long now—Hudes wrote this a dozen years ago!)

I have to admit that it took me a while to realize that the characters were in three different wars. I was confused for about the first ten minutes, of just seventy-four! (Perhaps I need to start reading the promo materials on all these shows and films I review. But I really want to experience them all with no pre-conceived notions, as I hope you do, too, so sometimes I just have to suffer the consequences of that innocent approach.)

I have a major conundrum in reviewing this show. I always appreciate the efforts that go into most of the theatre I see, but I have an aversion to anything to do with war. So, this one was a tad hard for me. The title gave me a clue that Elliot, A Soldier’s Fugue had something to do with war, (“soldier”-duh,) but I did not want to miss this historic theatrical event, so I decided to suck it up and see what was proffered.

And the production is admirable. The uber-sensitive friend I brought along found it to be especially moving. Actually she was moved to tears on more than one occasion during the show. And even on the way home when we were just discussing the show! So it accomplished what I perceive is its purpose. 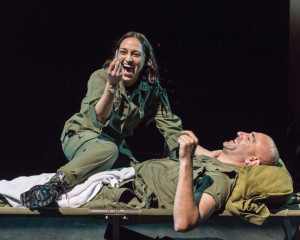 One of the very few times in this play where two of the characters interact. And it’s the most fun scene of them all! Caro Zeller and Jason Manuel Olazábal. Photo by Craig Schwartz.

Elliot, A Soldier’s Fugue covers a very serious topic, so thank goodness there’s some mirth mixed in. There’s a quartet of actors doing mainly monologues*, and they are all perfect for their roles. (And I wouldn’t be me if I didn’t mention this, but seeing adorable Elliot-portrayer, Peter Mendoza, in his tidy whities, made my night. If you’re an appreciator of male beauty as I am, do not be late to this show!) *[Note: The reason for all the monologues is that the playwright made the action akin to a musical “fugue,” which is defined in Dictionary.com as a “polyphonic composition based upon one, two, or more themes, which are enunciated by several voices or parts in turn, subjected to contrapuntal treatment, and gradually built up into a complex form having somewhat  distinct divisions or stages of development and a marked climax at the end.”]

The opening night audience was very enthusiastic and appreciative. I have a feeling that a lot of them were Spanish-speaking because they laughed knowingly at lines that went over mi cabeza.  (Maybe I should have studied more Spanish than French and Latin in high school! Just think how often those last two have come in handy. I haven’t had many chances to use “agricola aquam portam.”* Quel domage.) *[Translation: “The farmers carry water.” Or so I was told by the teacher. But I grew-up in Brooklyn, so who really knows what she saying with that New York accent!]

Enough digression—back to the play. The good news, for me, is that, even though this story is about war, we don’t see any simulated deaths nor hear any gunshots. Actually, the overriding sounds are of music. 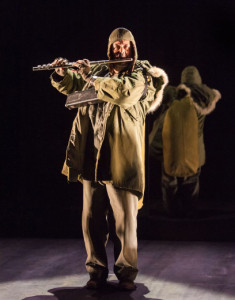 That’s because the grandfather plays the flute, which ties in to the “fugue” theme. (Hudes was a music major in college.) I was also a flutist when I was younger. My playing was–how shall I put it–less than stellar, but I just loved opening that textured black box with the blue velvet interior and assembling my silver flute. Seeing the actor do it on stage brought back so many memories for me. I don’t even know why I gave up playing the flute other than that I was terrible at it. But that’s rarely stopped me. (Did you ever witness me play in a sports tournament for charity when I was doing my TV show? I was always the worst one participating. But I always had the cutest outfits, which I counted on to disguise my ineptness. Wardrobe doesn’t count in an orchestra, though.) Please don’t lament my non-existent flute career–I passed my beloved instrument on to my brother, and he became a very successful professional musician who’s never had to work at any other job but music!!! How impressive is that? 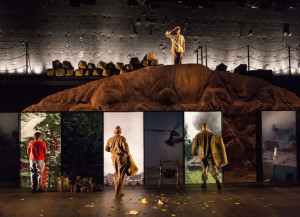 Also impressive is the set for Elliot, A Soldier’s Fugue. Sibyl Wickersheimer made the Douglas stage look so much bigger than I’ve ever seen it! At first, I was bothered by a wall of mirrors along the back of the stage. But it really helped because even though that theatre is mainly stadium seating, the oversized pate two rows ahead of me blocked the entire front of the stage! So, I would have missed a lot had I not had the mirror to reflect the action. And those panels are also the site of many interesting projections which set several scenes for us. The very end of the show is the most visually-spectacular of all.

I had wanted to see Elliot, A Soldier’s Fugue for several reasons, not solely because I’m planning on reviewing the entire trilogy. One of my main impetuses is that Ms. Hudes and I share some life situations, although in very different ways. First of all, she’s half-Jewish to my full-on yente self. And then we have some college experiences in common. Sort-of. She got her Bachelors Degree from Yale, while I smoked my first joint there! (I told you—not exactly alike.) Then she received a Masters Degree from Brown, while I taught five-year-olds how to sing The Wheels on the Bus Go Round and Round just a few stop lights away. So, at least we’ve traveled in some of the same areas, if not exactly on the same paths. 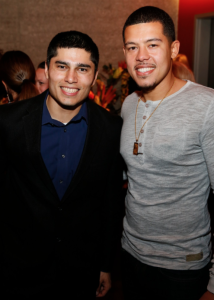 As always, the Douglas had an opening night fete. It was one of the most upbeat post-show soirees I’ve been to in a long while. I loved witnessing the semi-private lovefest among the cast and behind-the-scenes peeps, especially the one between the real and fictional “Elliot”s. That was fascinating to me.

The food was fabulous, too! The theme of the evening was continued with lots of delicious tacos, guacamole, and taquitos!

All that whetted my appetite for seeing the other two plays this month. I can’t wait to continue my own reviewing trilogy with Water By the Spoonful, which opens at the Mark Taper Forum this week-end.