Trending
You are at:Home»THEATRE»THEATRE: ELEPHANT ROOM
By Karen Salkin on August 28, 2012 · THEATRE

In the several years of its existence, I had seen only one show at Culver City’s Kirk Douglas Theatre. I would have liked to attend more, but I guess I was just too busy being the restaurant critic for that city’s newspaper to spend time there doing much else!

That one show, all wear bowlers, (no caps because that’s how it’s officially fashioned,) was really fun. So, here it is seven years later, (where does the time go???; I thought that was just last year!,) and two of that show’s creators, Trey Lyford and Geoff Sobelle, have brought us this new one, along with their new-ish partner, Steve Cuiffo. 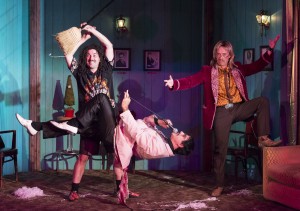 Elephant Room is equally zany and enjoyable. My only problem is that I don’t know how to describe it to you! I think you just have to experience it for yourself. It reminded me a bit of a crazy public access show, but this one’s intended that way, rather than being one of those shows that were entertaining by accident.

There’s magic, goofy physical comedy, crazy stories, singing, and even some audience participation. (So make sure you look cute when you go!) And lots of surprises. It’s all just so nutty. And easy to watch. At just seventy-five minutes, it’s short. And who doesn’t have an hour and a quarter for mirth?

You know I rarely tell the plot of a show anyway, because I never want to spoil anything for potential audiences; if that’s what you want to know, you can always look it up. But this time, I’m not withholding it; I don’t think there is one. It’s really just like spending an evening with your crazy uncles. Yeah, we should all have relatives like this; life might be a little lighter.

Difficult as Elephant Room is to describe, what I can say is that it’s just refreshing, non-serious entertainment. I love a show whose premise doesn’t beg to be discussed ad nauseum afterwards; this one exists solely to give the audience members some yuks and allow them to forget their troubles for a brief time. That’s what makes theatre worthwhile to me. The chuckling commenced the second the lights went up, and it went from here.

On opening night, the audience was constantly engaged because we never knew what was going to happen next. One thing this show is absolutely not is predictable. It’s wall-to-wall surprises.

For some reason, I had thought it was going to be an all-magic show, which turned-out to be erroneous. From what I can tell from reading the three performers’ bios in the program, only one of them is actually a trained magician; so I guess the other two faked it really well! Impressive.

In all honesty, I must admit that it’s not a laugh riot throughout, but I’d venture a guess that there was a smile on the face of each audience member for the entire duration of the show. And the man behind me was downright guffawing. As each surprise was presented, his yuks got stronger.

To sum up, (because I don’t want this review to be longer than the show itself!,) I say, if you want to spend an afternoon or evening having some laughs, this is the place for you.

Especially because going to the Kirk Douglas Theatre is such an easy-going experience! And, as the aforementioned former restaurant critic for this town, I say that dinner at any eatery in the small town, either before or after the show, coupled with an entertaining evening in the cozy theatre, makes a wonderful date night. Or girlfriend night. Or family outing. There’s nothing offensive or painful about this show at all.

[Note: Well, to normal people anyway. There are a few “e-words” in one part, and those of you who watched my show know how I irrationally hate those things, so that was a tad hard for me to look at, even though it was really one of the funniest bits. (For those of you who never got to see Karen’s Restaurant Revue, “e-words” are those white oval things people crack open and eat for breakfast. I can’t even bear to write the word, so I hope you know what I’m talking about. Eww. My pal should have told me to avert my eyes!)]

Since we were there on opening night, we got to mingle at the after-party in the super-comfortable lounge. I was happy to discover that a near-by restaurant I had favorably reviewed a few times, Meet, provided the light passed tidbits. It was great that they were all vegetarian so everybody could partake of them.

I even had one celebrity sighting from there, but you’ll have to wait for my next Celeb Sightings column, due up soon, for it. But what you don’t have to wait for is the chance to go see this show. It’s open for business and raring to go! All you need to bring is your sense of humor.