Trending
You are at:Home»THEATRE»THEATRE: DANA H.
By Karen Salkin on June 7, 2019 · THEATRE

Very rarely do I want to see a play with just one character, especially one that I’ve heard tells of a “harrowing odyssey,” but Dana H. at the Douglas Theatre in Culver City sounded so fascinating that I was compelled to see it.

And indeed, it is. Fascinating on both intended levels. The story itself and the brilliant way the tale is presented. So, kudos to everyone involved for this amazing accomplishment, especially actress Deirdre O’Connell who pulls off a theatre feat I had never seen done before. Nor even ever heard of. Nor thought of! On the surface, it looks so simple, with her just sitting in a chair, front and center, but it’s one of the most brilliant, mesmerizing performances I’ve ever seen! She should win every award possible for this work! (I’ll explain it all in a minute.) 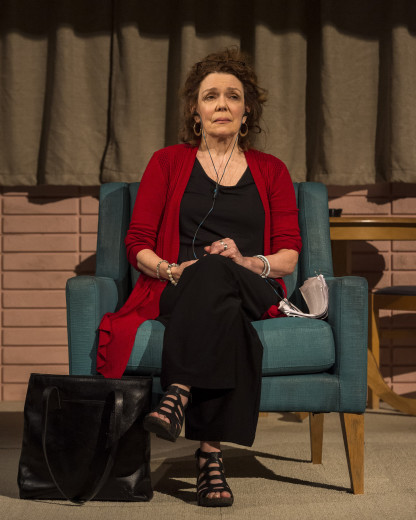 Deirdre O’Connell. Photo by Craig Schwartz, as is the one at the top of this page.

I rarely tell you the plot of a show, but in this case I must because if I had not known the uniqueness of it beforehand, I would not have realized what was going on. And even if I had, I think I would have been a bit confused with no prior knowledge.

Okay, so here’s the basic true story of Dana H. (Even if I told it to you word for word, you’d still be wowed by the production, so this won’t ruin it for you—it should make you want to see it even more!) In 1997, this woman, Dana (duh,) who was (and still is) a hospice chaplain in Florida, was held captive by a mentally ill patient, for whom she had gone above and beyond. He tormented her for five months! So the narrative is interesting enough, (especially for people like me, who watch all the primetime magazines on TV that feature real-life dramas such as this one.) But what makes this play extra-riveting is that it’s all told in the real woman’s voice and words! (Dana Higginbotham was interviewed on tape by Steve Cosson, an associate of her award-winning playwright son, Lucas Hnath, and the latter edited it to fit into a shortened and cohesive account. And that’s what we hear on stage at the Douglas.)

And beyond all that, the jaw-dropping aspect of Dana H. is that the actress, Deirdre O’Connell…lip-syncs the entire show!!!!!!! OMG! It’s seventy-five minutes long, with just about only five minutes of her not on stage, so that is a phenomenal achievement!

She can never make a mistake. Or ad lib. Or leave out a line, or even a word. She can’t even clear her throat or cough! I cannot tell you how impressed with her I am. (And all this after the trauma of losing her “daughter,” Alison, on The Affair. Please someone, give this woman a comedy to do! She deserves one right about now.)

Deirdre’s next appearance should be on Lip Sync Battle. She would cream the competition! (Thank goodness they didn’t hire Ashley Simpson to portray Dana, or we might have had the Saturday Night Live debacle redux.)

I had been trying to figure-out why the creative team of Dana H. didn’t just have Deirdre say the words herself, since she had to learn the entire script anyway. But they were so right to do it this way—it’s much more powerful!  And it’s so much harder for an actress to not have the freedom of her own rhythms. I cannot tell you how hard it is to portray that emotion when you can’t also use your voice.  Try it for yourselves. (There definitely cannot be an understudy for this one! But, at least the actress can always go on, no matter how sick she might be, even if she has laryngitis!)

Since it is in Dana’s own words, I could have just closed my eyes and listened to her, since I was exhausted that night. (Don’t ask.) But I could not take my eyes off Deirdre. I’ve truly never seen a performance like it before.

As to the “script,” I have so many follow-up questions! Such as, how old was she at the time this abomination took place? Why do she and her son, Lucas, have different last names? Was the husband who she mentions divorcing in the show Lucas’ father? If not, where was his real father in this scenario? 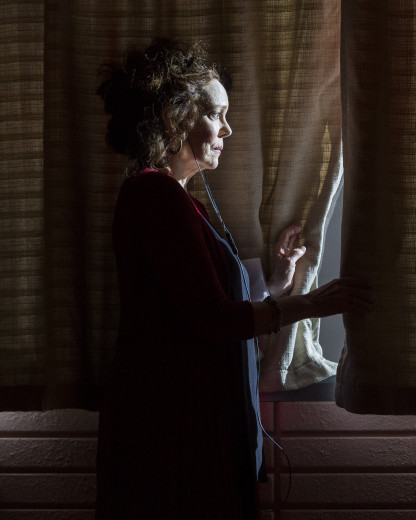 Dana never explains who “Lucas” is, (unless I missed it,) but his pal, the interviewer, of course knows, so there would be no need for her to clear it up in these taped sessions. But she does mention him a few times. I knew that he’s her son, (because I had read the press release,) but I had to research the topic later on, to see why he didn’t notice that she had been abducted. It appears that he was in college in New York when his mother was going through this ordeal, but did he not even call her in all that time? I’m not trying to make Lucas feel guilty—I’m just honestly curious. It’s not unusual for a college student to not go home for five months, but wouldn’t he be alarmed if he had not heard from his mom in all that time?! I guess this fam is clearly not Jewish because my tribe would never go that long. My little mo and I spoke all the time once I left home. And ever since then, as well. If we didn’t hear from each other at least once a week, (or more likely, every three days) we would have seriously called the police! (I’m not being flippant about all this—I’m just commenting on what I don’t understand about the circumstances.)

For those of you who hear the story and wonder why Dana didn’t try harder to escape, it’s really not for any of us to judge. We have no idea how we would react in that situation. Her words do not indicate that she had Stockholm Syndrome, at all, but she explains how her captor got her to stay in other ways.

In such a short production all the facts can not be filled in for us, but if ever they make a movie of it, maybe my queries can be answered. So how did they sleep? Could she have escaped then? How did they eat?

She mentions phones a few times, but I don’t know if she’s talking about landlines or cells; mobile ones were not prevalent in 1997. I was a queen among my crowd for having one back then. (But it was so big that one of my guy friends thought it was a gun!)

But we learn of those five months, and the prelude and aftermath, in just seventy-five minutes, so of course we don’t get all the answers. I suggest we all just marvel at the journey, both of the real Dana and the actress who plays her. These are two of the most intriguing women you’ll ever encounter, if only from afar.

Since the entire dialogue is entirely on tape, I must laud the great sound design, by Mikhail Fiksel, which makes it seem like it is actually coming out of Deirdre’s mouth, not over speakers! And I also greatly admire the excellent sound editing. The audience hears a “beep” when the tape is changing to another section. Just brilliant, all of it. (I hadn’t even realized that the jangling of her bracelets was actually on the tape! I was wondering why the actress kept playing with hers and why the sound of them was so clear. And then my friend Marc pointed-out that even those movements were coordinated with the tape. I’m in awe.)

But for me, the most technical kudos go to Steve Cuiffo, the Lip Synch Consultant! (Who knew there even was such a job as that?!) Man, that guy really knows his stuff! (He co-created a previous show in this theatre, Elephant Room, whose zaniness is the opposite of this current production! Go figure. In case you’re interest is piqued, here’s my review of that one: itsnotaboutme.tv/news/theatre-elephant-room.) 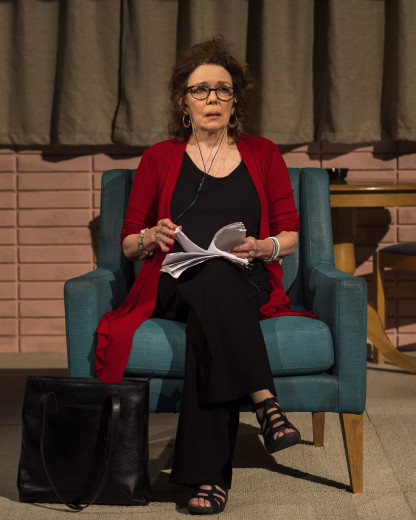 The only minuscule problem within Dana H., (for just me, I’m sure,) is that towards the end, there are about five minutes of my two worst nightmares—cacophony and flashing lights! I could not wait for those to be over. (And I still don’t totally understand the reason for them, except maybe to demonstrate the ongoing horror that would be too long to tell in one brief presentation. And that people went on about their business with no regard to helping her when they possibly could.)

And the one issue for my friend is that he mistook the dog-eared manuscript, which the actress held on to the whole time, to be the script of this show. But it’s actually a prop—the character mentions that she has to refer to it from time to time to refresh her memory of the horrific event; it wasn’t the actress looking at it for her lines. I don’t know how they can make that delineation more clear, though, since they can’t add any words to the scenario since we’re listening to actual recordings. So just go with the flow when you see it, especially since I just cleared it up for you.

I was curious about what the conclusion to this play could possibly be. And they did it in the best way possible, with Dana getting off the very painful topic of the torture she had gone through, and explaining how she helps dying people get to the “other side.” That part actually made Marc tear-up a bit, thinking about his own lost loved ones, as I’m sure it does for many other audience members. 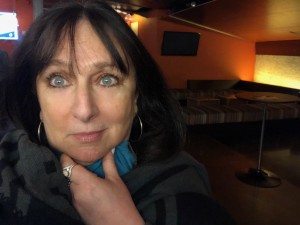 Now, because I don’t want to leave you depressed with this very serious subject, I have to tell you something amusing about the Douglas, especially for my fellow blue-eyed babes. (And dudes, too.) Before the show, I was standing at a particular spot in the dimly lit-lobby, while rocking my bright turquoise top, when Marc exclaimed, “Oh my God–your eyes are so blue!”  So, to cheer myself up on the way out, I took a selfie in that same spot to see what he was raving about. And he was correct–the lighting in the lobby is incredible for light-hued eyes! I just may take my next head shots in that spot! So please feel free to try it for yourselves.  That happy happenstance will help shake off the sadness of what you just witnessed.