Trending
You are at:Home»THEATRE»THEATRE: CHRISKIRKPATRICKMAS: A BOY BAND CHRISTMAS MUSICAL
By Karen Salkin on December 5, 2022 · THEATRE

Let me tell you—I have never heard my friend Laura laugh as hard as she did during this show! (Well, perhaps when she was in the audience at my former TV series, I say hopefully, but definitely not since then.) As she admits, she was downright cackling through most of this one! 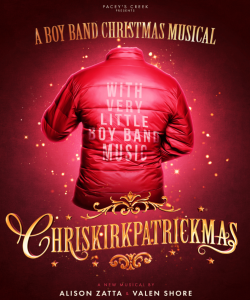 The poster for the show.

So, if you want some great laughs this holiday season, Chriskirkpatrickmas: A Boy Band Christmas Musical is the show for you!

I never look at the description of a show before I see it, (because I want to just watch the action unfold for myself,) so I had no idea that this was basically an NSYNC version of A Christmas Carol. I’m sooo familiar with that classic that I actually guffawed at one point towards the end, a moment that I don’t want to spoil for you. But just look to your right when “Chris” opens a window late in the very short musical.

It’s all sooo clever. Every bit of it. There’s even a bit of It’s A Wonderful Life thrown in, just to make it even more holiday-esque.

(L-R) Mia-Carina Mollicone, Emily Lambert, Valen Shore, and Elizabeth Ho. Photo by Matt Kamimura, as is the one at the top of this review.

At the end, (just in case the audience members haven’t yet read their programs yet, as I had no time to do before it began,) we find-out that Valen Shore, (who plays NSYNC founder Chris Kirkpatrick, and looks just like him—I almost did a spit-take when she first appeared,) and Alison Zatta, (a perfect *Marky Mark, outside of her hairless armpits,) have written this show…for the past decade! (They must have been ten when they started it!) And their hard work has definitely paid off. *[Note: Don’t rush to research NSYNC to see if Marky Mark was in the group—he was not. You’ll just have to see this show to see how he fits in, which is brilliant.] 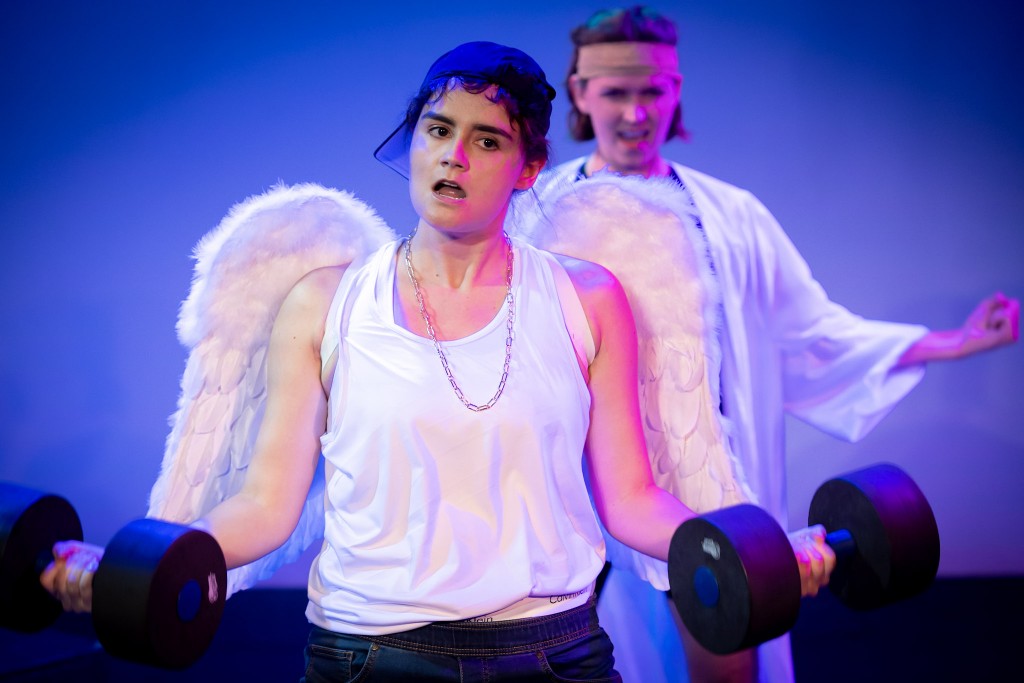 Alison Zatta, with Riley Rose Critchlow in the background. Photo by Matt Kamimura.

I love that Chriskirkpatrickmas: A Boy Band Christmas Musical is about a boy band, written and performed entirely by females! You go, girls!

My whooping-it-up pal Laura declared, “It’s hilarious!” She added, “They pull-out all the cliches you think of when you think of a boy band. They do the whole boy band trope very well. The ghost of Marky Mark is especially clever.”

All seven actresses are good, with the three stand-outs being the aforementioned duo along with Nicole Wyland as Justin Timberlake. She’s a riot.

Nicole Wyland in the center. Photo by Matt Kamimura.

And even though none of them are particularly great singers, (but definitely good enough,) it all works. And every single lyric is understandable, which is rarely the case with musicals.

The original songs are all inventive and witty, especially since they’re not allowed to use NSYNC’s actual compositions. That lack explains the subtitle to the proceedings: “With very little boy band music.”

I love a show that doesn’t overstay its welcome, and this one is a perfect hour and ten minutes. (Don’t let the program, which lists the songs as being in “Act One” and “Act Two,” fool you; it’s all one continuous seventy-minute presentation.) It all goes by in a flash. 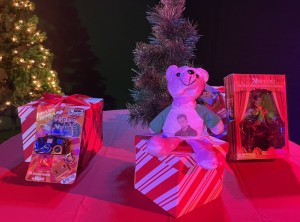 The entire evening (or afternoon) has a very festive vibe. They have some good (and complimentary) extras, such as a choice of sparkling cider or champagne at the beginning, (with lids, so you can take the beverages into the theatre,) easy on-site parking, (if you get there early enough,) masks, (which are required, thank goodness,) and raffle tickets for cute little gifts after the show. 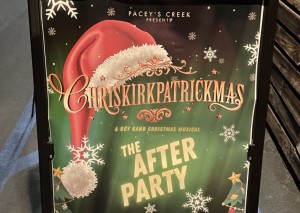 I love that the writers’ production company is named Pacey’s Creek, (which you can see in tiny letters at the top of this poster.) I assume that means, as I was, they were Team Pacey during the run of Dawson’s Creek. Photo by Karen Salkin.

Those raffles are done at the open-to-all-ticket-holders “after-party.” It’s really more of a group hang than an actual party, but it’s still really fun. It’s held in a beautifully-decorated space adjacent to the theater, with music and a no-host bar. And that’s where they do the raffles, which everyone seemed happy to win. It’s a whole happy situation; there’s nothing better at holiday time.

Chriskirkpatrickmas: A Boy Band Christmas Musical is perfect entertainment for people who remember the boy band era. If they happen to be fans of A Christmas Carol, as well, even better. But I promise you, absolutely everyone will appreciate the humor and talent, no matter their knowledge on the subject going in.

But hurry—the show is here in LA for just one more week!!!

Chriskirkpatrickmas: A Boy Band Christmas Musical running through December 11, 2022 (But I really hope it gets extended, so check their site)
The Actors Company
916 N. Formosa Ave., LA
www.chriskirkpatrickmas.com