Trending
You are at:Home»THEATRE»THEATRE: CATS
By Karen Salkin on March 4, 2019 · THEATRE

It’s finally happened—I saw the musical Cats for the first time ever! The Pantages theatre just keeps these fun shows coming! I thank them for always furthering my musical education. 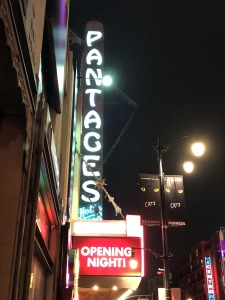 I was actually due to see it many years ago, in Toronto. Mr. X was starring in a play with the dramatic and eccentric Tammy Grimes. She had a cat named Monsieur Pamplemousse, (which means “grapefruit” in French—go figure,) and in effort to get me to love him, as well, she asked me to go see Cats with her, on her day off. But it was Mr. X’s day off, too, of course, so I had to decline, every time she asked, (which was many.) I figured I’d see it some day soon, which never came in all those years, until now. [Note: I have to give myself some props for being brave enough to see this show–I have very serious asthma, triggered by cats, so I was a tad concerned that I just might have a psychological asthma attack!]

Yes, of course I can now see why this long-running musical has been the topic of so many good-natured jokes along the way.  But I cannot argue with Andrew Lloyd Webber music, great dancing, one classic song, and many fun visuals and surprises.

On top of all that, Cats is an easy show for people who have a lot on their minds these days. There’s no real story to follow, so you can just let your mind wander whenever necessary while enjoying all the fabulous dancing. 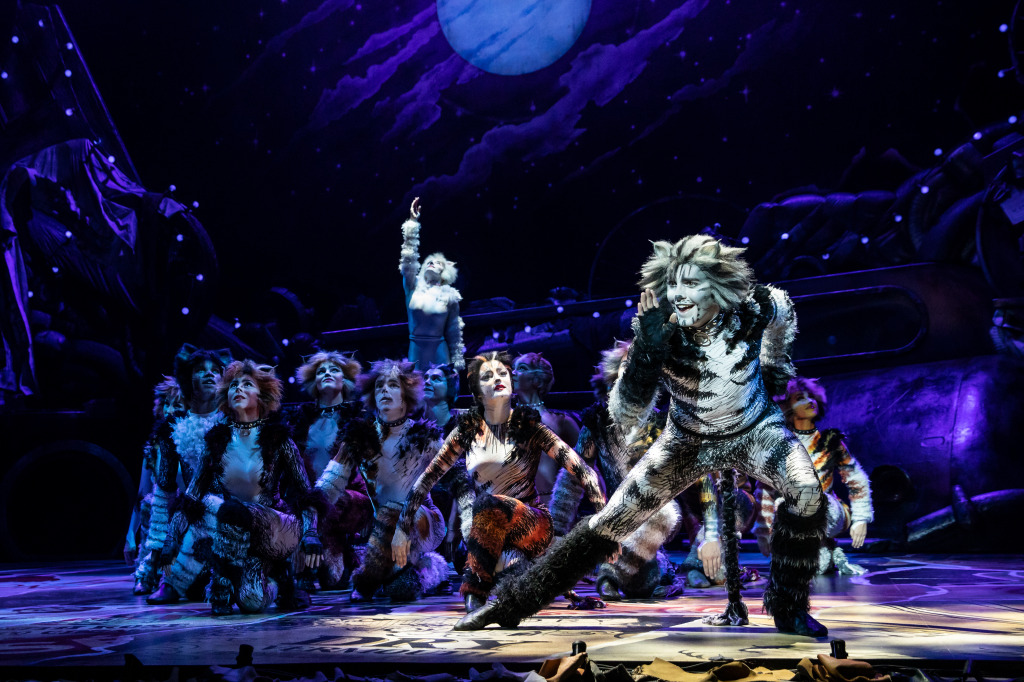 Speaking of the dancing, I was very pleasantly surprised to discover just how physical of a show Cats is, which I so appreciate. I had thought it was just all singing. While that assumption is sort-of true, because there is no dialogue, per se, (every line is sung,) I’m happy to report that there’s just as much dancing. And it’s all brilliant! I’m always thrilled when so many dancers, (the unsung heroes of show business, in my opinion,) are employed. And these are all excellent talents on this National Tour. I couldn’t look away for even a second, (even when the evil man sitting next to me kept kicking me all night. Don’t ask. Maybe he was just dancing along with the show. Yeah, right.)

There was just about every style of dance imaginable on that stage. I always love a good tap number, and the one in Cats happens early, so they caught my attention pretty quickly. Major kudos to choreographer Andy Blankenbuehler, who based his work on that of the original steps by the late, legendary Dame Gillian Lynne, (who was my idol for marrying a man twenty-six years her junior!!! Wow.)

On a shallow note, (perhaps even moreso than that previous sentence,) there’s about one percent body fat in that entire cast. I went home and ate diet food after seeing all those insane bodies! 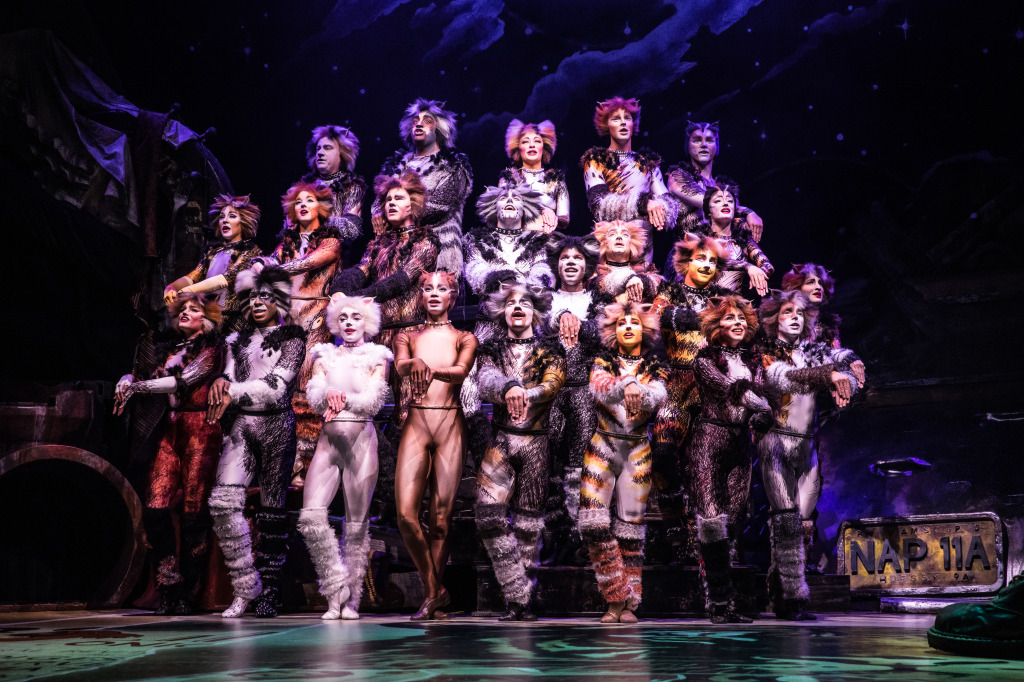 As an admirer of live music, I love that there are just about as many people in the orchestra as there are in the humongous twenty-six person cast! I’m in the corner of musicians as much as I am of dancers, so I was happy all-around.

The opening of the show is really fun and exciting, with spooky music and visuals. And the visuals keep on entertaining throughout the evening. I commend the powers-that-be for how much they do with different lighting throughout the evening. I don’t often notice that particular theatre art, (even though I did date my lighting professor,) but these designs, by Natasha Katz, are super-special. I especially went nuts over the colored lights, including on Mr. Mistoffelees’ sparkly jacket, near the end, in the big number about him. 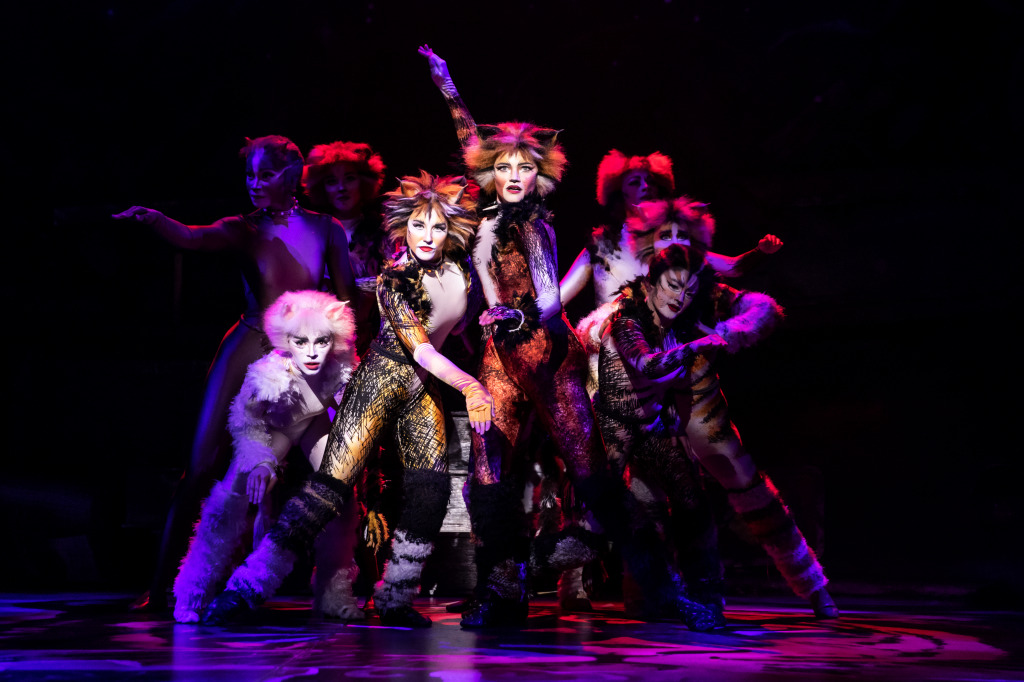 The only disappointment for me was Keri Rene Fuller as Grizabella, the elderly cat who sings Memory. The rest of the opening night audience seemed to enjoy her enough, but once you’ve heard Betty Buckley, the original Broadway Grizabella, sing this classic, I have a feeling that just about everyone will pale in comparison. (Except for Elaine Page, the original Grizabella in London—she was great, as well. You should really watch them sing this song on YouTube some time; their performances are things of beauty.) The costume on this girl didn’t help—they made her look like a rat or armadillo, not a cat. I really had no idea what was going on with the character until I researched the show later. (It turns-out that she’s an old cat. But this production’s version of her doesn’t have cat ears—just very long gray hair. I still don’t get that choice on the part of the wardrobe people for this production.) Since this is the role who sings that now-iconic song, and never dances, they should have cast a much stronger singer, one who would get to our souls, as Betty and Elaine have. [Sidebar: Please note—the title of that song is Memory—singular. If I hear one more person erroneously call it Memories, plural, I’m going to scream. Please get words right, people, if you’re using them!!!)

Other than to get the title of that song right, I have only one suggestion for you if, like me, this will be your first time seeing Cats–research the story before you go. I could not imagine all these years what the show is about, and upon finally seeing it…I had not one clue of what was happening! When I did my post-show research, I found the entire tale, of how composer Andrew Lloyd Webber set to music this long-ago book of poems that T. S. Eliot wrote for his grandchildren, (minus the one about Grizabella, which he also wrote but left-out of the book because he felt that she was too depressing for the young ’uns,) to be fascinating. So you should look it up, anyway! (By the way, I never heard the word “Jellicle,” which refers to the cats, before in my entire life–because it was made-up by Eliot for just these poems, and is not a real word–but I made-up for that on opening night, when I heard it about nine-hundred times.) 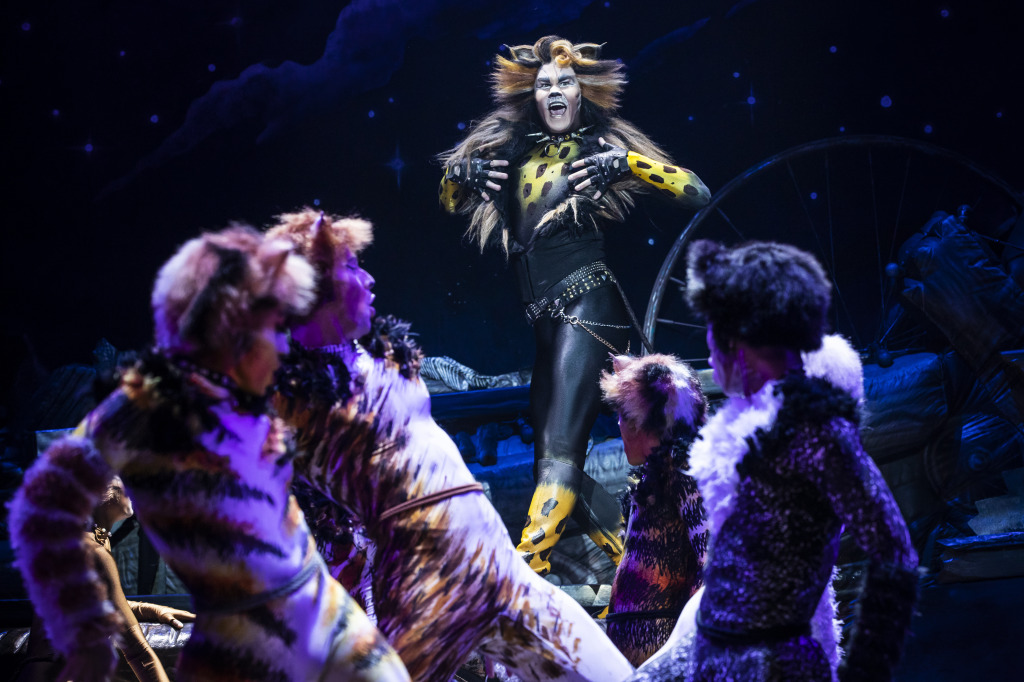 The whole concept reminded me a bit of my English teacher mother, who taught music as poems, (such as the Beatles’ Eleanor Rigby,) so I’m sure she was a fan of this show. (My brother played in it for years on Broadway, so I’m just assuming she must have seen it.) Her teaching examples made me really appreciate the educational aspect of Cats.

While this is far from being one of my favorite Broadway musicals, I do feel like it’s de rigueur viewing for all fans of entertainment. I know that I’m glad that I finally have seen this time-honored tale. I think you will be glad to witness it, as well. 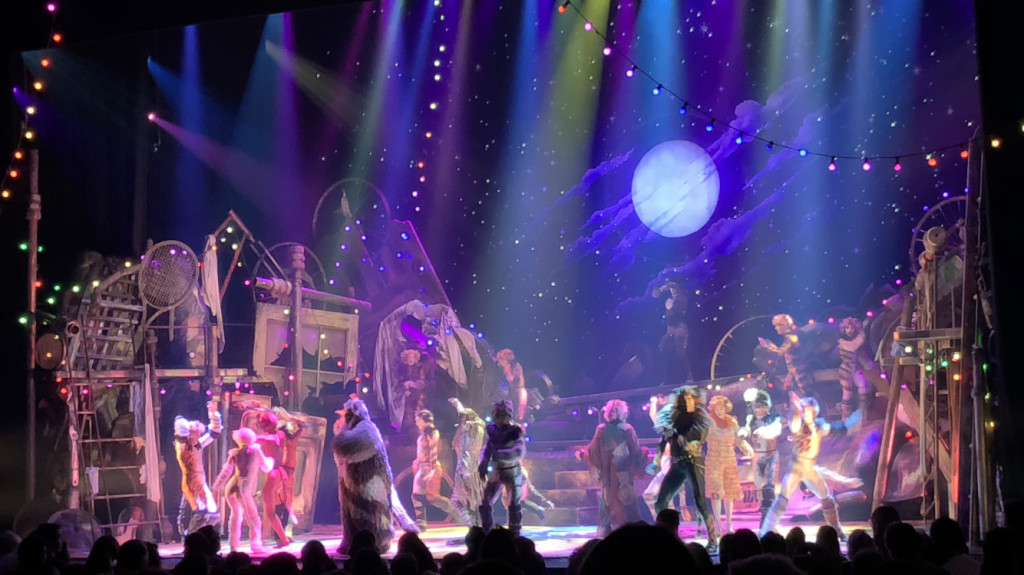 And here’s a major bonus for Southern Californians—we are lucky enough to get to see the stage version now, before the movie version comes out at the end of this year. And that one, sadly, has cast only a quartet of dancers, and just two or three real singers—it’s mostly just famous actors. As I happily discovered at the Pantages on opening night, Cats is a very dance-y show, yet the movie features only the amazing Les Twins and two ballet dancers, so I feel this musical really needs to be seen on the stage first. So go to the Pantages right now, while you have this wonderful opportunity!