Trending
You are at:Home»THEATRE»THEATRE: BUYER AND CELLAR
By Karen Salkin on July 16, 2014 · THEATRE

This one-man show at the Mark Taper Forum is so clever that I wish I had written it! The premise alone is brilliant! I love a person who shares a funny idea with a pal, and then actually makes it materialize! So impressive.

Shockingly, with all the time I’ve spent in New York, I had never heard of this show, that’s been playing there for awhile! And, since I rarely read the press releases I receive, (for fear that they’ll ruin what I’m about to see,) I had not a clue what Buyer and Cellar was about. I thought it was about someone buying wine! 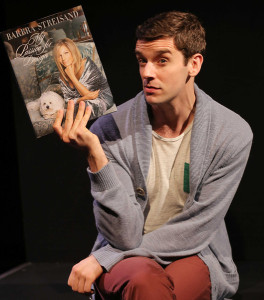 When the opening night performance began, the audience was guffawing almost immediately! I had no idea what was going on, so I could not imagine why people were chuckling from the get-go. To make sure that doesn’t happen to you, (because everyone must see this show, and it’s on tour, so it’s going to several cities,) I’m going to let you in on the storyline. It’s a fictional account of an unemployed actor who gets a job being the sole employee at the “shopping mall” in Barbra Streisand’s basement. The mall part is apparently real; she talks about it in a design book she wrote in real life. (I’m jealous of it, by the way. That sounds like fun to me! It’s a novel way to display your stuff that you have no idea what to do with! If I had basement, I think I’d copy her, although Mr. X might just lock me in there to be done with my possessions and me!)

I usually hate one-person shows, but this one kept my interest the entire time. The star, (who plays all the parts, which I loved because that’s how I always tell stories myself,) is Michael Urie, of Ugly Betty fame. I’m sorry to say that I was totally unfamiliar with Michael because I had seen only the first episode of that TV show, and it bored me to tears, so I never went back. But I can’t imagine anyone doing this role better, (even though I understand that it was written for Jesse Tyler Ferguson, who then couldn’t commit to the project.) I’m sure that Stephen Brackett’s direction played a hand in the perfection, as well.

Michael plays the mall employee, and as he shares his story with the audience, he does all the characters he comes in contact with, most notably the diva herself. What I loved about that portrayal is that he didn’t try to do a real impersonation; rather, he just does a funny interpretation, and it’s brilliant.

[This is a sidebar, but being the beauty lover that I am, I do have to make mention of the fact that Michael has a really good body, which I noticed when he crouched near my section of the audience near the end of the show, and his back looked great in his tee-shirt. I just wished he had pulled up his drooping pants in the back of bit; I couldn’t figure out if that was a fashion choice, or if they were just falling down because of all his physical work on-stage. But I’m sure I’m the only one who notices stuff like that, so it’s no biggie.]

There is not much more for me to say about this fabulous show except that I’m recommending it to everybody. It’s non-stop laughs. The material, written by Jonathan Tolins, is perfect, and all of the physical and vocal nuances that Michael Urie brings to the part are a joy to behold.

Besides the general mirth, so much of this monologue resonated with me on a personal level. I’ve never met Barbra Streisand herself, but I have so many one-degree separations from her that I feel I know her somewhat. (Not to mention that for almost my entire life, somewhat to my chagrin, I’ve been told that I look somewhat like her, without the semi-crossed eyes.) I’ve been pals with her first husband, Elliott Gould, almost since my arrival in L.A. lo those many years ago, and I’ve met her son and her managers and former managers many times. Her half-sister, Roslyn Kind, and I used to have the same agents, so we’ve been to a party or two together back in the day, and Barbra and I were both very associated with Liz Brooks’ Butterfly Bakery in Westwood until it closed a few years ago. And two of my old pals used to be companions to Barbra’s mom in her later years. I have sooooo many personal stories about Barbra that I could have written this show! But not nearly as well as Jonathan Tolins did.

The fact that Jonathan met the woman for only a second several years ago, (and I think not any of the people associated with her,) makes his writing that much more astonishing. I’m not sure if he himself even knows how spot-on his musings are!

Adding to the enjoyment of the action is the crispness of the very simple Andrew Boyce-designed set. It somehow helped me picture the surroundings Michael was describing. (Even the design of the title fonts is so clever, although I don’t know to whom to attribute that ingeniousness.)

I found-out post-performance that New York’s Ted Snowdon is the lead producer, and he’s the man who brought us Souvenir on Broadway a few years back, which was another (almost) one-woman show, (starring Judy Kaye,) and is one of my all-time favorites. So, it makes sense that Buyer and Cellar is of such a high caliber.

I just wish that every theatre experience was as good as this one! Please do yourself a favor and don’t miss it!