Trending
You are at:Home»THEATRE»THEATRE: BULLETS OVER BROADWAY, THE MUSICAL
By Karen Salkin on January 8, 2016 · THEATRE

BULLETS OVER BROADWAY, THE MUSICAL

First of all, this tour of the show is in LA for a very brief run, so go see it while you can!

I was glad that the inclement weather on Tuesday night did not deter the crowd on opening night of Bullets Over Broadway, The Musical at the Pantages Theatre. The peeps who braved the elements (though the rain itself was kind enough to hold off for the duration) were treated to a really enjoyable show. 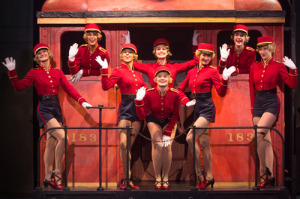 I know this is shocking for a girl from Brooklyn, (especially one whose father was a high school teacher of Woody Allen,) but I’ve never seen the film, Bullets Over Broadway! So I judged this musical on its own merits, not as a comparison to the movie upon which it is based. (I do wish I had had time to see the film before finishing this review, to be able to compare them for you, but alas, I did not, so I’ll leave that to others.)

My stand-alone judgement of the musical is: it’s great fun, and entertaining throughout!

For those of you who don’t know the story, it’s a Woody Allen-scripted comedy set in 1929, and is basically about gangsters and Broadway producers, and their gals, more or less. (You know I never ruin the exact plot for you, as other reviewers insist on doing.) (I was disappointed to discover, when doing my post-show research, that Woody himself did not play the part of the nebbish-y producer in the film, because I felt like I could hear his delivery throughout the musical!) 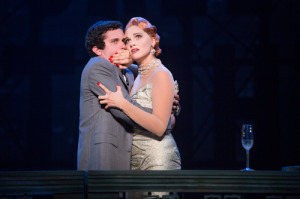 Even though it’s a true Broadway musical, it uses all ditties from that era, rather than new material, (although there are a few words and verses added here and there.) I know that has bothered some people who’ve seen it, but not me. Good music is good music. And it all fits perfectly with the storylines. Many are famous tunes, such as Up A Lazy River and There’ll Be Some Changes Made, but I had never heard the most dazzling one—The Hot Dog Song, (which I subtitled I Want a Hot Dog For My Bun!!!) OMG! It even took me a minute to get it, but I’d go see the show again just for that one number. How brilliant for someone to discover that song, and then use it in the way they did! 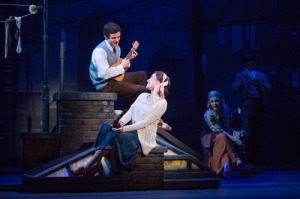 The entire cast, (outside of Jemma Jane, who so overplays her pivotal role of the gangster’s girl, with the worst New York accent I’ve ever heard, that she was ruining the first half for me,) was excellent. I especially enjoyed Bradley Allan Zarr as the food-addicted leading man of the show-within-the-show, who could sing and dance even with an ever-growing physique. And Hannah Rose Deflumeri, (you may have to change that difficult moniker, girlfriend!,) in the role of the playwright’s long-suffering girlfriend, sang her heart out! The audience went nuts for her second act solo.

Michael Williams, who plays the playwright, is good—he looks like he dances great, even though this wasn’t the correct vehicle for him to show off those skills. He’s sort-of reminiscent of Michael Jeter. I could just picture him doing the “bar” number, Take A Glass Together, in Grand Hotel, (although he’s way too young for that role.) (Maybe he can make a whole career out of doing musicals that take place in 1929!)

And even though Michael Corvino, as the head gangster, doesn’t get to sing much, (until a bit at the very end,) you can tell that he is an accomplished opera singer. If the artists-around-town have an off-night Monday concert, (as some have done in LA for several years now,) this Bullets Over Broadway gang will be juicy! 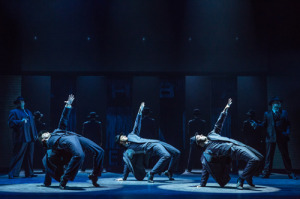 But the number that brought down the house is a tap dance—by the gangsters! It’s a sparkling, riveting, uber-athletic (and manly,) show-stopper, and everything that a great musical should feature. Great job choreographing it by the unbelievably prolific Susan Stroman, who also directed the original Broadway production. [Note: For this National Tour, the direction and choreography are “recreated” by Jeff Whiting and Clare Cook, respectively.]

I always love a good dancing show, and this is definitely that. I was glad to see that all the dancers have real bodies, as I assume they did back in 1929, when this story takes place.

I also enjoyed that they showed us the brief bits of the play-within-the-show from the backstage perspective, complete with audience drawn on the backdrop. What a clever bit of staging.

Of course, since Woody Allen wrote both the film and this musical, there were many excellent lines. My favorite was, “Guilt is strictly for the bourgeoisie…and the Jews.” That’s so Woody! 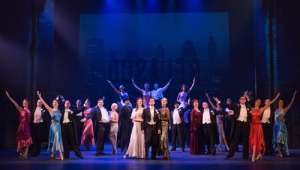 The ending didn’t really make much sense, with the stage assemblage belting-out a rousing rendition of Yes, We Have No Bananas, (I thought I had spaced-out for a minute, and lost a bit of the wrap-up,) but I didn’t mind because I was so happy to experience such a happy, upbeat ending for once! It made each audience member leave with a smile on his or face, and to me, that should be the aim of every show.

So, take my advice and see it now!

[Note, unrelated to this show, but FYI: As usual of late, I’ll be live-tweeting the Golden Globes on Sunday. If you don’t already follow me, why don’t you try it this year? After all, twelve thousand peeps can’t be wrong! @MajorCelebrity]