Trending
You are at:Home»THEATRE»THEATRE: BRING IT ON, THE MUSICAL
By Karen Salkin on November 15, 2011 · THEATRE

BRING IT ON, THE MUSICAL

Bring It On, The Musical is yet another show that I was too riveted to to bother writing notes during. The truth is that there were a few weaknesses, but I didn’t care even one little whit; the musical was that enjoyable. Everyone keeps asking me about it, knowing how critical I usually am, and I tell them the same thing that I’m telling you all: GO SEE IT! It was totally fun from beginning to end. 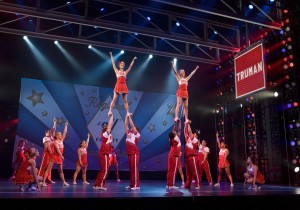 Where else can you see cheerleading live and on a stage, rather than in an arena? It looks much more spectacular with a closer ceiling than at Pauley Pavilion. When I was friends with the UCLA National Championship basketball team, fifteen years ago, several of my pals were cheerleaders and dance team members, so I got to see them perform all the time. I marveled at their abilities, and loved the “backstage” stories, like of which guy was dropping which girl. But there’s something about seeing these actual cheers on a stage, rather than outside for football games, or indoors for basketball ones, that blew me away even more than what my own friends did. [Fun note: my friend who was the UCLA cheerleading captain married the strong guy who caught her, perhaps because her previous partner dropped her all the time. I love that story!] The theatre should have had oxygen on hand—not for the cheer-ers on-stage, but for all the gasp-ers in the audience!

Anyway, I really don’t remember much about the movie this show is based on, other than that I should have asked for my money back when I wasted my time on it, but it seemed to me that this was not the same story as the film, or even close to it. Mr. X confirmed for me that it wasn’t. 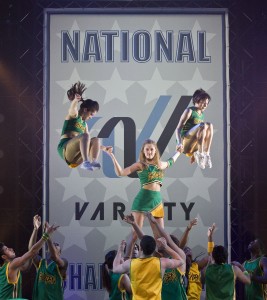 But again, I didn’t care because this story, though kind-of dumb, is fun. Yeah, not-thought-provoking fun, and way-over-the-top fun, and high-school-play kind-of fun, but fun nonetheless, which is always so important to me. And I love going to the theatre and see everyone come out smiling. That’s the best to me. There’s so much pain everywhere else you look that to spend a night with colorful, mindless fun is what everyone should want to experience. 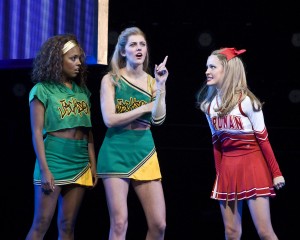 Mr. X commented that the voices were strong and he thought the use of several drop-down screens, to establish place, was superior. (I’m paraphrasing quite a bit.)

And, as big fans of So You Think You Can Dance, we were happy to see Season Three third-place finisher, Neil Haskell, have a featured role. It was fun to hear him talk and sing just a bit, but it was really great to see his wonderful gymnastics skills in person. 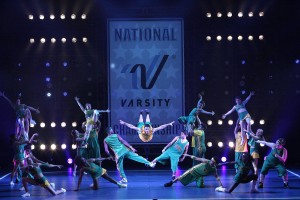 There’s no need to go more in depth with analysis of the show. It was basic goony fun, with incredible dance/athletic routines, an interesting enough premise, and the requisite musical comedy performances from the actors. And I could see it several more times. And judging by the super-appreciative reaction from the opening night audience, so would everyone. So, you might have to fight us for tickets for this limited-engagement. But it will be well worth the fight.

Speaking of the audience, it wasn’t as star-studded as I expected, but I have a feeling that a corporation bought it out, although I really have no idea about that. I did spy several famous people, though, including Sally Struthers, Kent Boyd, Jesse Tyler Ferguson, and Kym Johnson. I’ll tell you more details about them in my next Celeb Sightings column, which should appear here in the next couple of weeks, so keep an eye out for it.

One last note: as much as I love all these wonderful opening nights, I do slightly lament the fact that they rarely have opening night parties anymore, which I suspect is due to the economy, just like everything else nowadays. But that’s where I always got my best celebrity sightings and dish. And after Bring It On, the audience members were so upbeat that an after-party would have been a pleasure. I even brought the krump-dancing Mr. X, in case the party (that, alas, was only in my mind,) had a DJ, since everyone in the show was a dancer, as well. So, we just had to go home and do some dancing on our own. Which, as it turned-out, was even more fun than a party would have been! Rah rah rah.