Trending
You are at:Home»THEATRE»THEATRE: BRIGHT STAR
By Karen Salkin on October 25, 2017 · THEATRE

In addition to whatever else is good about the musical Bright Star, which opened at the Ahmanson in downtown LA last week-end, the number one reason to see it is the star, the luminescent Carmen Cusack. She is the Bright Star! That girl can sa-ang! No wonder she doesn’t have a big booty because she sings her ass off in the show! (Sorry—I just could not censor myself on this one.) 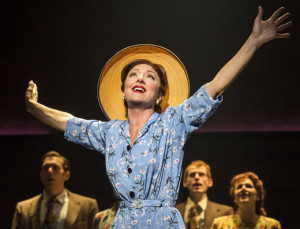 Carmen Cusack. Photo by Craig Schwartz, as is the big one at the top of the page.

And she’s adorable. Seriously, for me to go so nuts over a female performer is an unusual occurrence, but Carmen deserves that adoration. She’s so cute, and sings so well, with perfect physicality on every big and even little occasion, (like just grabbing for a baby’s sweater,) that I feel she can play Mary Martin roles, which I’ve never thought about anyone else ever!  Accepting anyone else as my beloved Peter Pan is just about the highest compliment I can give a musical actress!!! And you know what? I even think that she should be the one to play Cher in the musical about the diva’s life that’s being worked on as we speak, even though Carmen can obviously sing perfectly, and Cher–well, she’s Cher. Let’s just leave it at that.

Carmen’s performance is for sure the highlight of the show, but Mr. X and I really did enjoy the entire presentation on opening night. Bright Star is a kooky kind of musical, which is a good thing, in my book. It’s very different, which is why Mr. X liked it so much. There are none of the pat production numbers; I almost don’t know how to describe it to you. (Which is one of the reasons you need to see it for yourselves!) 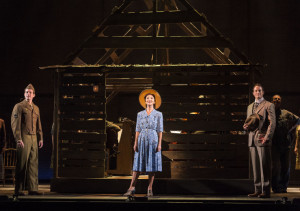 Going in, I knew nothing about Bright Star at all, save for its Tony nominations. I had seen the opening number, If You Knew My Story, on the Tonys last year, and thought to myself, “If I knew your story, that means I would have already seen the show! So, since I did not, please let me in on it!” And then I had to wait over a year to find-out just what her story is! (Yes, I am aware that I could have just looked it up, or asked someone, but I always like to experience something for myself, as you should, too.)

Bright Star is actually a tale of two complete-yet-intertwined stories. And it goes along that way for quite awhile. I don’t know about anyone else, but I figured-out the lead character’s story halfway into Act I, which still didn’t take away from my enjoyment of the journey. (It actually let me know to not be in pain over whatever was to come; I always need a happy ending these days, and this story could have easily gone the way of many a Greer Garson film.)

The one big musical number. Photo by Craig Schwartz.

In case you really don’t know anything about this show, it was written—lock, stock and barrel—by Edie Brickell and Steve Martin. Yes, that Steve Martin—the banjo-playing comedian. It’s based on a short story from the early 1900s that Edie had read and then wrote a song about. And the duo expanded that song into a whole musical. From what I understand, that song itself could not be used in the show because it does tell the entire story, the one the lead character teases us with at the very beginning. If she sang that original song instead of the now-famous opening one, the show would be over after one tune! Very interesting, don’t you think? (Okay, maybe I shouldn’t be writing a review when I’m a tad punchy from being very sleep-deprived.) 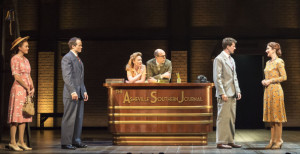 The action takes place in North Carolina in the 1940s and 1920s and goes back and forth between the two decades, giving us the whole “story” by the end. The very simple set and wardrobe changes make each time frame crystal clear, which is a help.

I admired the very simple set, by Saturday Night Live’s Eugene Lee, (one of whose sets I’m proud to say I actually worked on at Trinity Repertory Company when I was a teen-ager—long story, which if you knew…,) who chose minimal pieces of moveable furniture and the like to set the scene. (For example, just a sole headstone indicates a cemetery, and a whole library is portrayed by just a couple of bookshelves and a cabinet.) It’s all very clever, but I went absolutely gaga over a little train that ran across the top of the proscenium arch every now and then, like the one from the old Stick & Stein eatery just south of LAX. (Okay, I do realize that I’m more than a tad punchy at this point! But I really did love, love, love that darling little train in Bright Star!) 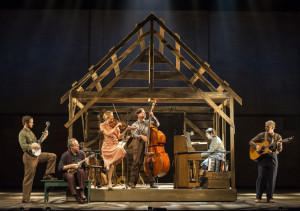 The focal point of the set is a little wooden country cabin which houses the excellent, exuberant musicians. It’s so great to have them right in front of us for much of the time. Mr. X labeled the number they do at the beginning of Act II, before the action resumes, a “bluegrass bonanza,” an assessment I agree with. I’m not a music expert, so I just made a note that the show features “hillbilly music,” which is not a put down at all, (even though I just realized that it may sound like one.) It’s an incredible experience to see a Broadway musical composed entirely of that type of banjo and fiddle music. We loved it! I think everyone will, (despite there being no memorable tunes outside of that opening one.) 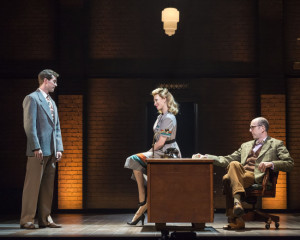 Two actors other than Carmen Cusack impressed me, in comedic roles—Jeff Blumenkrantz and Kaitlyn Davidson as the main character’s assistants. Jeff is a riot who has spot-on delivery, and Kaitlyn’s one big musical number is a highlight of the show. I’ve rarely seen anyone kick so high, unless she was a Rockette!

But that’s about it for my enjoyment of the acting. The rest of the cast is all good enough; just none of them got to me. And there are several older man characters, all of whom are obviously actors and not singers, so those bits of casting in a musical made me scratch my head a bit. But it made no never mind, to speak like some of the characters for a second; Carmen’s voice, and the humor of many of the lines, made-up for any even small weaknesses in the show.

The script itself is very entertaining, with tons of laughs. As a writer myself, (duh—you’re reading this, so I guess you already knew that fact,) I really appreciate this comment from the magazine editor character: She says she isn’t a fan of someone because “he used the word ‘their’ as a singular pronoun!!!” I struggle with that very thing just about every single day—I want to use it correctly, but I realize that very few people will notice or care, so why am I torturing myself to type the extra words “his or her?” You could tell the intellectuals in the audience by just who laughed at that line, (which, sadly for LA, was not many that night.) 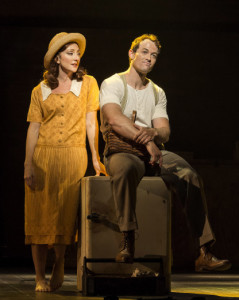 Before I go, I have to give a big shout-out to Carmen’s dresser or hair person or whomever it is who puts her hair or wig up and down in a matter of minutes, multiple times, with not even a tendril out of place. And helps her change wardrobe about a zillion times. But the best is when she changes to a teen-ager right in front of our eyes. I loved that! Those continual transformations are mind-boggling. (Not as mind-boggling as my transformation from no make-up to make-up, as a female host on a talk show I was a guest on bitchily pointed-out to the entire audience, but still…)

Okay, since we’re at the end of my review of Bright Star, here’s my one shallow note, which I’m telling you because others have noticed it, too. Carmen looks sort-of like…me! (The cute, skinny, younger version, of course.) We both have blue eyes, auburn hair, and, how shall I say, a prominent proboscis. I hope she never changes hers, either, because it might affect her voice. And she’s so adorable the way she looks right now, if I do say so myself. (Remember—I’m punchy.)

So, go see the show already! It’s not in town for terribly long, and you have to see this woman perform in person. Plus, even if you think the story gets a tad painful, just hold on, and imagine the characters’ roads not taken. I can’t imagine anyone not loving this musical.