Trending
You are at:Home»THEATRE»THEATRE: BREATH OF SPRING
By Karen Salkin on July 29, 2016 · THEATRE

This new production at Theatre 40 in Beverly Hills is a nice respite from the very many horrors in the world these days.   Breath of Spring is a tad silly, but it’s also entertaining.  And that’s what a distraction should be. 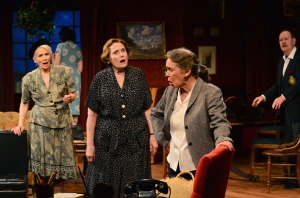 On opening night, I thought the action seemed a bit familiar.  So, when I researched it later, I wasn’t surprised to see that the original play became a British film in 1960, called Make Mine Mink.  When I used to have more leisure time in life, (before I started this e-zine, which takes up just about waking moment of mine, and many of my sleeping ones as well!,) I used to watch tons of old movies.  And this is one I had seen years ago.  But, now that I’ve also seen the play, I actually like it better than the film.  Part of that may be because the man who starred in the movie, Terry-Thomas, always made me a tad nervous.

While we’re on the subject of Breath of Spring’s origins, it was written in 1958, and is not about the future.  So, I don’t understand why the program states that the setting is 1960.  And, as much as I enjoyed the Jeff G. Rack-designed set as much I usually do, my friend John and I both agreed that it looks more like 1950 than ‘60, or actually like it came right out of the ‘40s!  But it takes place in England, so maybe they were very behind the times with their décor back then. It doesn’t really matter to the action, though; it’s just a tad confusing.  So, when you see it yourself, just know the time frame is very long ago, no matter the exact year, and go with it. 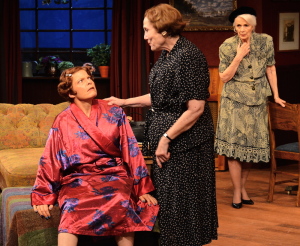 The weird thing is that, as cute as the title is, it doesn’t really fit the show.  That moniker refers to a type of fur stole, or the company that makes it.  And the show is somewhat about furs.  (As usual, I’m not telling you the plot, because you know that I feel it’s so much more fun to watch it unfold for yourself.  But I will tell you that this one had something to do with stealing fur coats.  If I hadn’t known better, I would have thought it was inspired by Lindsay Lohan!) [Note: John thought the title might also refer to the story pertaining to the “Spring” of the characters’ lives, but he’s much deeper than I am.]

But none of these observations has to do with this particular production, which is basically charming and engaging, as are most of Theatre 40’s offerings.  I love seeing all the old-timey plays they bring us each season!  It’s like the Turner Classic Movies channel comes to life in front of our eyes! 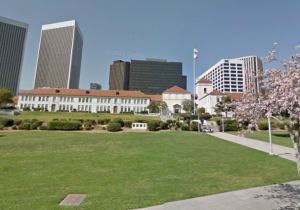 So, while I’m on the topic of this theatre itself, I have to digress to discuss it a bit more.  I think that every student of acting should visit this place.  Often. There’s so much to learn there, especially from the predominantly senior actors, whom I really appreciate seeing ply their craft.  When John realized that the location was actually right in Beverly Hills High School, he commented about what a wonderful opportunity it is for the kids to get to see professional theatre so close to them!  I just hope that he is correct, and that the members of the school and its community frequent the theatre.  I only wish I had known of it when I was a young actress starting-out in LA.

And it’s always so comfortable in there, especially with their good air-conditioning in this summer’s heat, that I can’t see any reason for not seeing every show there each season.  The tickets are very affordable, and there’s free parking right under the theatre, steps from the entrance. You can’t do better than all of that with a Los Angeles entertainment! 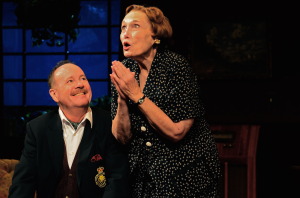 So, now back to Breath of Spring.  It has many good laughs, and moves along well enough, although it could be a tad shorter. Some of the action is unnecessary, but I’m assuming they’re playing it as written.  Each actor really fit his or her role, which is not always the case, so that’s also a plus.  And I really enjoyed the occasional amusing Pink Panther-esque music that adds so much to the proceedings.

Yes, the play itself is a little old-fashioned for nowadays, but it’s actually a great breath of fresh air (see what I did there?,) to get to enjoy a painless show in these days of so many serious theatre pieces about the violence and dysfunction in the world today.  With all the news on TV and the internet, I really appreciate getting away from all that negativity.  (But something funny happened about that retro-ness.  At one point, when the characters were trying to figure out how to spell a certain flower’s name, one of them suggested to just use “snapdragon.”  It took me a minute to realize he was talking about another flower—my modern mind at first thought he was talking about an app!!!) 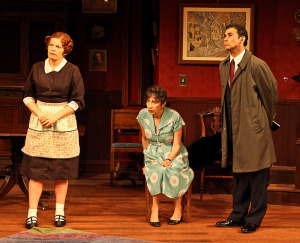 (L-R) Alison Blanchard, Jean Kauffman, and Joshua Olkowski. The two on the ends are the ones who did the song and dance. Photo by Mona Lee Wylde.

But there was a seemingly inexplicable musical number that was inserted between the two scenes in Act II.  I thought it was going to portend something about the end, like that maybe those two characters would be in cahoots to steal the booty.  Or, alternatively, maybe these two actors have some side vaudeville act someplace, and it’s in their contracts here that they would get to do a number from it even though this is a non-musical play.  I really enjoyed the song and dance, and both performers were excellent in it; it was just confusing as to what it was doing in there. (I’m pretty sure it was to give the other actors time to do a full change, since the following scene takes place six months later. As delightful as it actually is, it’s just strange because we’ve never even seen the guy in the duo hitherto that. At first, I thought it was some crazy guy from the audience! You never know nowadays. At least he wasn’t a streaker! Or maybe he should have been because he’s cute!)

Taking everything into consideration, I recommend that you spend a summer night seeing Breath of Spring at Theatre 40. Enjoying fun live theatre is a much better way to get away from it all than seeing yet another movie flop!